While archaeologists in Austria discovered evidence of modern-style bras made from linen estimated to be from sometime between end of the 14th to the second half of the 15th century, earlier Neolithic drawings show women in corset style garments that may have been animal skins moulded to their bodies.  The Minoans and Greeks used types of under bust corsets, often with nothing else, and the Romans developed laced corsets, mainly for their servants to wear. 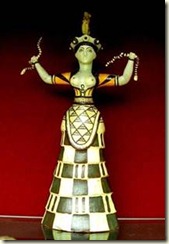 Statuette from the Palace of Knossos, Crete source

During the 13th and 14th centuries dresses of stiff fabric had lacing incorporated into them to achieve a trim silhouette, but with the start of the silk industry in the 14th century and softer more delicate fabrics, a stronger undergarment was needed. The first artificial support garments from Italy were called a coche, and in England became known as a busk . When the Italian-born Catherine de Medici went to France to marry into he French Royal family in 1533 she brought the corset fashion with her. Apparently disliking thick waists she instructed her ladies in waiting to cinch their waists to an extremely tiny thirteen inches around.  Of course Catherine was only 14 at the time, and quite tiny, so 13 inches would have been possible for her at that time. 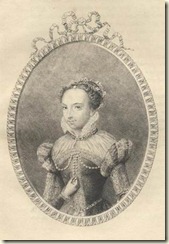 At this time a corset was a simple fabric bodice with tabs at the waist, stiffened by horn, whalebone, ivory or wood, called a stay. It was usually laced from the back, and was, at first, a garment reserved for the aristocracy – those who could afford servants to help them dress. 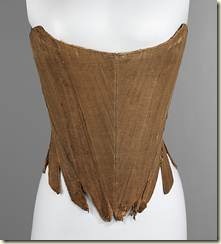 American linen, cotton and whalebone corset from the first quarter of the 18th century source

By the 18th century more boning, usually whalebone, began to be used and stays became low and wide in the front and higher in the back.  Some used shoulder straps, which were attached in the back and tied at the front sides, and the fabric became stiffer and more tightly woven, known as coutil. Although 18th century stays were not meant to be seen, they were often quite decorative, with finely stitched tunnels for the boning. 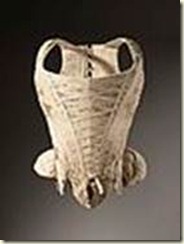 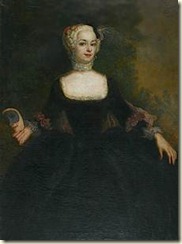 The purpose of 18th century stays was to support the bust and flatten it, while moulding the waist into the fashionable conical shape and drawing the shoulders back. They were very stiff being heavily boned with whalebone or cane, around 70 pieces, and many women complained of bruising under the arms and at the waist from the sheer rigidity of the stays. They were worn by all woman of every social rank, although tight lacing was indulged in only by the very fashionable and wealthy. Tight lacing was also difficult to do by ones self. Corset lacing became a mark of class by Victorian times, with front laced , buttoned or hooked bodices being worn by women who could not afford servants. 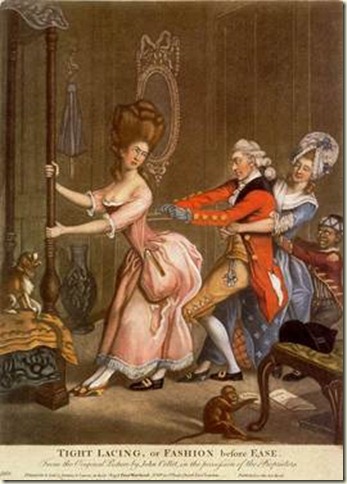 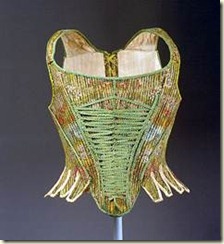 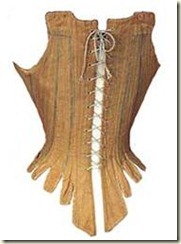 American Stays from c. 1786, which would have originally had shoulder straps source

After the French Revolution at the end of the 18th century, the dress silhouette changed into the high waist tube neoclassical shape (think Empress Josephine), and corsets lost popularity as the torso was now hidden under flowing fabric. The breasts were still lifted, but cups were used to part them more. 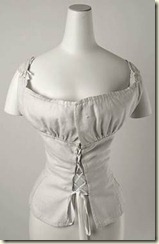 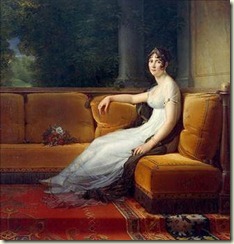 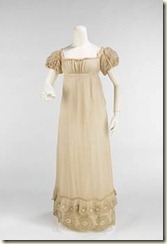 Gerard, Empress Josephine at Malamaison, 1801  and an American cotton and silk dress from c 1810 source

Men, or Dandies as they were known, began to wear corsets after George, Prince of Wales became Regent in 1811 after his father was diagnosed with mental illness.  During this Regency Period more men than ever before wore corsets, and this continued well into the 1840s, though after 1850 men who wore corsets claimed they needed them for "back pain".   At the beginning of the 19th century corsets began appearing again for women, in a softer form, a little lengthened to the hip, with room in front for the bust and a lowered back. The shoulder straps more or less disappeared by the 1840s. 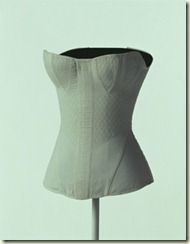 Corsets were usually individually made to the measurements of the wearer, and could be expensive. To keep them clean and to avoid constant laundering, the corset was usually worn over a chemise, a sleeveless low-necked gown made of thin easily washable material like cotton or linen. Men’s corsets were also designed to be worn over an undershirt of similar materials. 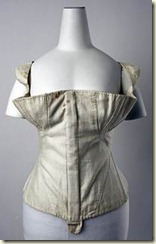 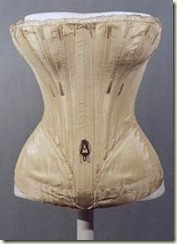 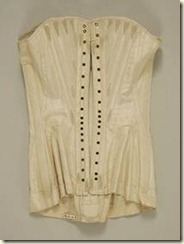 In 1837 George’s niece Princess Victoria became Queen, and she reigned as Queen until 1901.  The Victorian era was noted for its puritanical and hypocritical attitudes (as well as it’s extraordinary fashions), with women  regarded as weak creatures, and it was felt that their bodies needed the discipline of corsets.  In Australia and New Zealand, it was also a time of rights for women as the suffragette movement gained momentum and and the right to vote was achieved for women in both countries by 1894.  However, corsets continued to be a fashion staple everywhere, granting women social status, respectability, and the idealized figure of youth with a well-defined waist that showed off wide (child bearing) hips and ample bosom.  Many examples survive today, and I’ll look at early Victorian corsetry next time.