A brief history of ironing boards


Yesterday I posted about vintage irons.  I know I’ve been looking a lot at electricity and technology lately, but I thought maybe I should look at the other important aid in ironing – the ironing board.  How long have ironing boards been around?  My Dutch grandmother always ironed on a table or the kitchen bench with a couple of towels for padding, as she was taught in school (there’s a photo of girls learning to iron in yesterdays post).  She said that some ladies like to put a board across the backs of a couple of chairs instead. I personally find the pointy end of the ironing board handy for the shoulders of shirts, but I have ironed on a table on occasion.

The first ironing table seems to have been patented in 1858 by W. Vandenburg and J. Harvey but was really just for pressing shirt bodies and pant legs. The first truly portable folding ironing board was patented in Canada in 1875 by John B. Porter, and included a removable press board used for sleeves.
In 1879 Scientific American Magazine (v 40, No. 13) published the invention of a new ironing table patented by Albert Hogins of Morrisania, NY.

In 1892 an African American woman (wow!), Sarah Boone,  obtained a patent for her improvements to the ironing board.  Boone's narrow, curved ironing board was designed to improve the quality of ironing sleeves and the bodies of women's garments. The shape and structure allowed it to fit a sleeve and it was reversible, so one could iron both sides of the sleeve.

This photo shows a maid ironing at an ironing board in about 1908. It’s actually a publicity photo for GE electric irons. This board looks to be made of wood. Its probable that many ironing boards were home made. 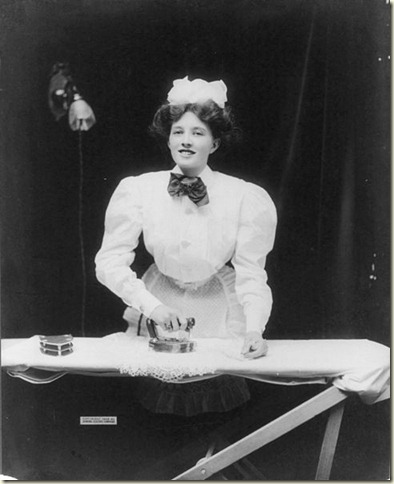 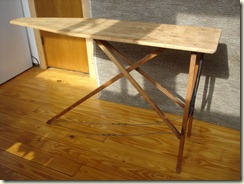 This ad is for a Rid-Jid Ironing Table is from 1920, which was fully collapsible. 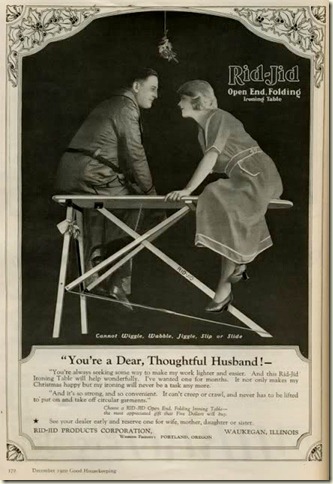 Improvements in ironing boards naturally followed the development of the iron – as irons became lighter, so could ironing boards. This is a 1930s model of pine, which is quite a lightweight timber. Its similar to this one which I picked up at the op=shop a while ago for $5. 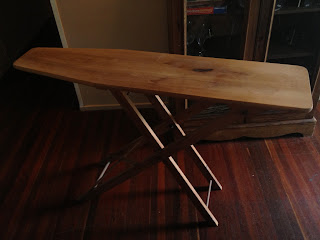 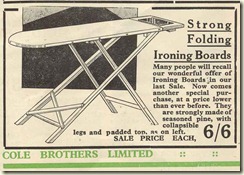 Here is a drop down ironing board in the 1930s Kitchen at the Henry Ford Museum. 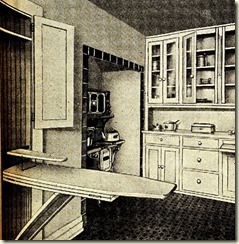 For some funky new ironing board designs, like my favourite below, have a look at Crooked Brains. 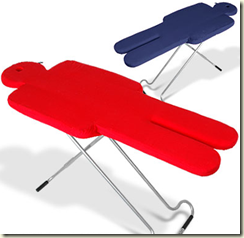 I can just see that red pyrex iron on a red flat man board……..