I have been watching a lot of WWI movies lately it seems, and it got me started thinking about the homefront, and rationing.  I know rationing was a big thing during WW2, but what about the first time around.  Did it even happen, or was the population of such a size rationing was unnecessary?  I imagine that at the time, when there were not the processed foods and supermarkets as we have now, that saving. growing and preserving your own food was of prime importance to being with.  As this poster seems to suggest.

It seems that soon after the outbreak of the war in 1914 the United Kingdom declared a blockade of the North Sea, to prevent ships reaching Germany.  Germany naturally responded by using its U-boats (submarines) to sink ships carrying military equipment or food to the United Kingdom.  As an industrial nation, Britain relied on the sea lanes to import food, and luxury items such as alcohol and cigarettes,  for its large urban population. The main exporters to Britain were America, Canada and Australia, which  meant that merchant ships had to cross the Atlantic Ocean. Up to 1916, these merchant ships could travel in relative safety, although by the end of 1916, U-German boats were on average destroying about 300,000 tons of shipping a month.

Around the same time, The Defence of the Realm Act (DORA) was passed in Britain.  It’s main aim was to protect Britain from the German enemy getting information, be it given freely by conspirators or accidently by loose lips, and to allow the government to requisition any land or buildings needed for the war effort.   The first version was introduced on August 8th 1914 and was quite short.  You can read the 27 November version here. 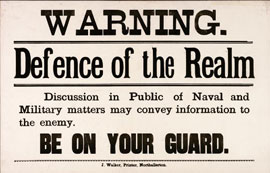 Some of the things the British public were not allowed to do included flying a kite or lighting a bonfire (which may attract planes or zeppelins) , buying binoculars (to spy), feeding animals bread (waste) or discussing naval and military matters – censorship was therefore introduced.   During the autumn and winter of 1914, supplies of fuel and light were curtailed, street lamps were dimmed, and no long lines of lights were permitted. As the war continued, British Summer Time was introduced, to give more daylight for extra work, while opening hours in pubs were cut , alcoholic drinks were watered down and customers in pubs were not allowed to buy a round of drinks. People at home were also encouraged not to over indulge. 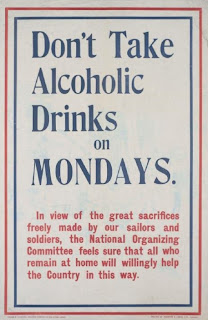 A similar act was passed in Canada on 22 August 1914, the War Measures Act and in Australia on 29 October 1914 as the War Precautions Act 1914. The Australian version did not limit food or alcohol consumption, but had quite a few paragraphs to do with ‘aliens’ and their internment or eviction from the country.  You can read an original copy here.  When they joined the war in 1917,  the United States introduced the Espionage Act of 1917 and the Sedition Act of 1918.

Of course, as is human nature in the face of impending disaster, people panic bought at the outbreak of war.  Some shops sold out of food in days in August 1914. However, after the initial panic, people settled down into a routine and food was not a problem until the end of 1916,  when the Germans introduced unrestricted submarine warfare.  Many merchant ships were then sunk , which had a drastic impact on Britain's food supply. In April 1916, Britain only had six weeks of wheat left and bread was a staple part of most diets. Food prices rose and by October 1916, coal was in such short supply that it was rationed by the number of rooms a family had in its house, and newspapers filled their pages with advice on fuel-saving cookery and fuel substitutions. In December 1916 a Food Controller was appointed and a Ministry of Food established “to promote economy and to maintain the food supply of the country”.

In February 1917, the German Navy sank 230 ships bringing food and other supplies to Britain. The following month a record 507,001 tons of shipping was lost as a result of the U-boat campaign. The success of the U-boat as a commerce raider forced the British to introduce a rationing system.
The restrictions introduced by DORA did not really work in regard to food consumption, so the government then tried to introduce a voluntary code of rationing, to a standard set  by the Royal Family.  This did not work either, as anyone with money could get more than enough food on the black market. Signs of malnutrition were starting to be seen in the poorer areas.

The idea of rationing food though,  was to guarantee supplies, not to reduce consumption. And although official figures apparently show that the intake of calories almost kept up to the pre-war level, for most people, the type of food eaten was different. The prestigious potato, that British staple, were in short supply.  Any area that could grow food was converted to do so - gardens were turned into allotments and chickens were kept in back gardens for eggs. Even if shops did get food in, the queues were huge, as described by WWI veteran Charles Young:

“when some food did get delivered to the shops everyone for miles around besieged the place. The queues stretched for miles, and if you were old or infirm you stood no chance. Food riots were very common. But news like this was kept from us, over in France. we only got to hear about it from men who came back after being on leave.”


Meat was also hard to get. The consumption of butchers' meat dropped from an average of 2.36 to 1.53 lb a week during this period.  Bones from the shop were made into soups, and people in the country hunted rabbits and fished for their meat, and back yard rabbit keeping became popular.


Sugar, sourced largely from Germany before the war (beets) , was the most difficult  to come by item, and it was the first food to be rationed in January 1918.  The weekly consumption of sugar was 1.49 lb in 1914, it fell to 0.93 lb in 1918. By the end of April 1918 meat, butter, cheese and margarine were added to the list of rationed food. Ration cards were issued and everyone had to register with a butcher and grocer. This rationing took place after three and half years of fighting, which is astounding compared with the rationing in WWII, which began only three months after the outbreak of war.  Although officially the people of Britain did not starve, there were instances reported of children dying of starvation. Charles Young again:
“One said to me "Chas, I am going home to my wife and kids. I'll be some use to them as a cripple, but none at all dead! I am starving here, and so are they at home, we may as well starve together." With that he fired a shot through his boot. When the medics got his boot off, two of his toes and a lot of his foot had gone.”


The allied soldiers were given their own emergency ration, the so-called 'Iron Ration',  for use in the event of their being cut off from regular food supplies. The Iron Ration in 1914 was as follows:
1 lb. preserved meat
3 oz. cheese
12 oz. biscuit
5/8 oz. tea
2 oz. sugar
1/2 oz. salt
1 oz. meat extract

In addition the troops in the trenches were regularly supplied (or meant to be) with rations. Including meat, tea, jam and sugar.  You can see the daily rations for British and German troops here. The Germans seemed to get a lot more sugar and a bit more alcohol and tobacco....

In  Germany the food situation was more dire than in Britain.  It is thought that Germany did not introduce rationing, despite the decline in farm production and no access to American or Canadian goods.  Although the German  rural (and industrial) labour force had been largely reduced because of conscription Germany did not start using women to replace male workers as did Britain.  By 1917 there was wide-spread hunger in Germany. Potatoes were in short supply and many people subsisting on the less nutritious turnip.

The powers introduced by DORA allowed the government to take over land when it felt that it was necessary to do so, and in 1917, the government took over 2.5 million acres of land for farming.  By the end of the war, Britain had an extra three million acres of farming land, farmed mainly by the Women's Land Army (Conscientious objectors also worked on the land).   Some farmers resisted the idea of women working on farms, and the Board of Trade had to send officers around the country to persuade farmers to accept women employees. The strategy was successful, and by the end of 1917 there were over 260,000 women working as farm labourers. Indeed the British wheat harvest in 1917 was at record levels, thanks in no small way to women.

The Board of Agriculture also sent instructors around the country to demonstrate bottling and canning fruits and vegetables to cut back on waste, and the London County Council issued posters advising people to buy bread by weight rather than by the loaf. When the food shortage became more serious rations, grew stricter: the sale of luxury chocolates and sweets were stopped, the use of starch for laundering was restricted, the amount of bread or cake sold at tea shops was reduced to 2 ounces, and it became an offence to adopt and feed stray dogs. Everyone was advised to “Eat slowly: you will need less food.” or “Keep warm: you will need less food.”, yet no explanations were given on how to keep warm with fuel rationed and an insufficiently fat diet.

Even though the United States did not ration food, the government urged people to conserve "before it is too late." Children were also called upon to show "thrift and economy" during the war.

Most signs of malnutrition were overcome after rationing was introduced, and rationing was in force until about 1920, despite the end of the war and access to imported goods.  For an in depth look into food rationing, have a look at the online book,  Foods That Will Win the War and How to Cook Them [1918].