Yesterday I looked at Bon Marche, the grand French department store. Today a look at quite the opposite – small, mainly family run stores in rural Australia one hundred years ago.  Most of them sold a range of goods, and I can imagine myself lost inside, browsing for hours……..or maybe not, as the horse might be getting a bit restless waiting for me!
For some reasons some of the images aren't showing - please go here for the first image if that's the case for you.

Raymont's store was built in 1885 by Thomas Percival Raymont to sell groceries and produce.  He bought and sold – what a great system – and was also an insurance agent.   The store was in operation for 65 years and was later managed by Thomas' son, Bill. Thomas and his wife Eliza lived in a house next to the store and there raised eight children (five dying in infancy). Up until the early 1900s the store was an agent for the supply of rations to the Aborigines who lived in Enoggera. From 1888 the store included the Post Office for the area, although it has a separate door, so it may have been leased to someone else.


Staff and customers outside John Stewart's grocery and provisions store on the corner of Ipswich Road and Clive Street around 1913. Possibly the family lived above the store, which was quite common in those days.

Mr D. Geary came to Chinchilla from Miles in 1904 and set up this shop to supply basically everything to the local farmers who grew mainly grain, and also ran cattle, sheep and pigs.  Timber was also felled nearby.  I love the way the store also has an ironmongery.  I doubt ‘iron’ goods were made in the store, as blacksmiths usually had separate premises because of fires risks, rather it is an alternate name for hardware store.  However, the store was destroyed by fire in 1922.

I don’t know much about this one, but it’s great to see people in country Queensland had access to instruments and sheet music.

This image may not work either, so go here to see it.
Beckett's store was a tailor, drapery and shoemaker business, but also sold stationery. It looks to be situated right in the bush, with no road.  Another building is being constructed near by, so maybe this was the start of the town.  It has a very wild-west feel to it, don’t you think?


Lennon’s clothing store in Townsville 1913.  By 1913 Townsville was fifty years old, and quite a large town.  The even had motorised buses! Lennon’s shop, positioned cleverly next to the bank, looks quite upmarket, and has a very large sign to attract customers – literally a sign of things to come.  A Mr William Lennon was involved in the Bank of Queensland in the 1880s, before opening his own stock agent store around 1900 – it’s possible this store is an off shoot of that.  Lennons’ sold footwear as well as clothing.  Here is the interior of their boot department. 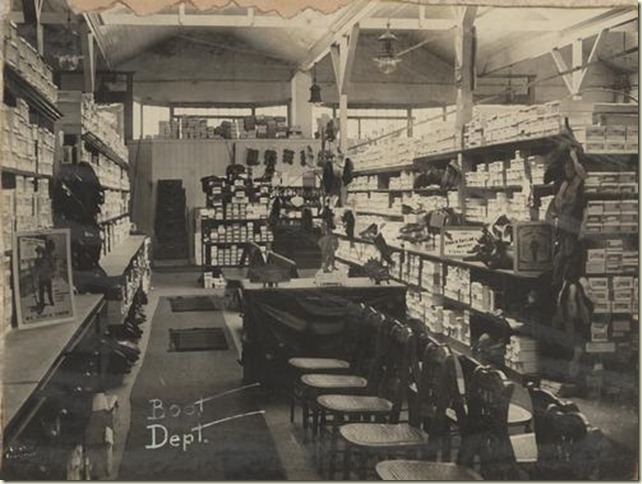 This last store is located in Oakleigh, Victoria, now a suburb of Melbourne but in 1913 it was more of its own town.  From the exterior is looks like the store was located near the railway line, and sold everything from cigarettes to groceries, and glassware to electrical goods. Like all of the other stores, it also has a generous veranda. 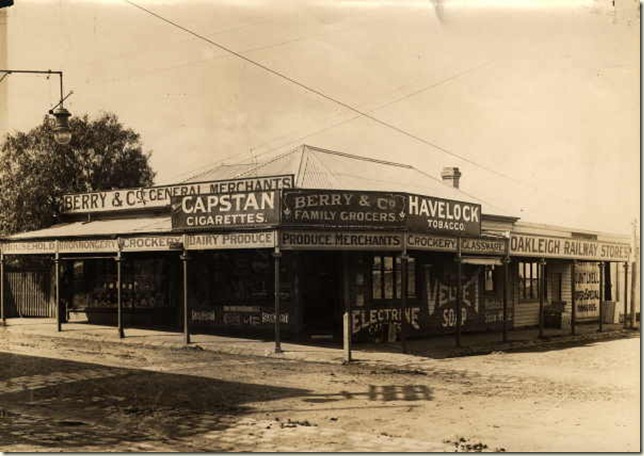 I was happy to find an interior view of this same store. Definitely not a self service store – most goods are displayed behind the lovely wooden counters. 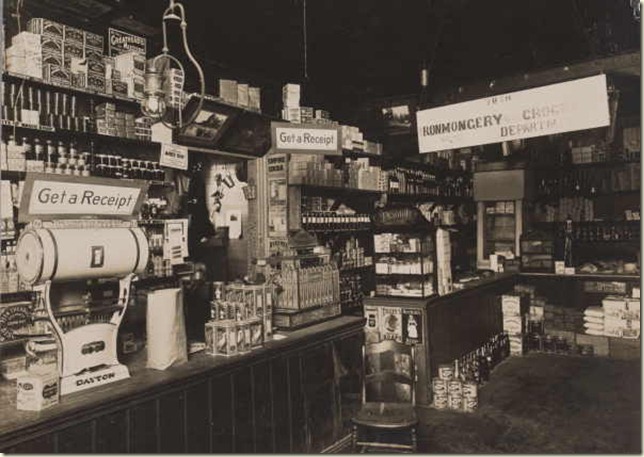 I love the old cash register and Dayton scales. Note the ‘ironmongery’ sign – probably more hardware.
Imagine being able to fit all available goods in one store today – no mega hardware or department stores, or supermarkets.  Shopping has certainly changed in 100 years.

More photos of stores on tumblr, including some overseas stores.