The 1920s had paved the way for fashoin that was was less restrictive than in the preceding decades - corsets were out, and the more comfroatable bras and girdles were in. Beachwear and resort wear became popular, as did sports wear and outfits that women could be more active in.
The American's were probably the leaders in the field when it came to sportswear, so much that it really became the look of the day. Fashion could no longer be merely beautiful, it had to be practical.  Women were participating  in leisure activities and sports in greater numbers, and golf was particularly popular.

By 1930, the standard golf ensemble was a matching two-piece dress with a straight or a pleated skirt often worn with a hand knitted cardigan or vest.  Women often wore patterned stockings, and golf shoes of the time usually had rubber soles.  while pants or knicker-bockers were rare. Stores began selling a one-piece golf dress with gathers in the shirts for easier arm movement and pleats, splits and  flares in skirts for greater leg movement. This pattern from the 1930's illustrates these ideas - glamour with greater ease of movement allowed. 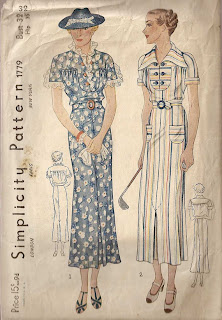 I am probably the worst golfer in history, but I could almost take it up if I got to wear one of these dresses. Not sure about the footwear though. This 1934 ad for Ivory Snow soap flakes features a pleated shirt dress from sportswear maker B.H. Wragge. 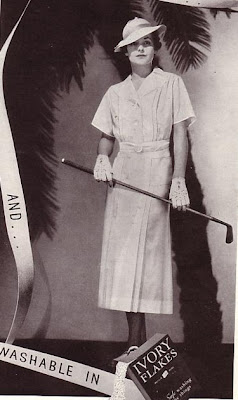 Although cotton was still popular, the new rayon fabric also made an appearance.  Rayon could imitate the feel and texture of silk, wool, cotton or linen, and was easily dyed in a wide range of colours. It also had the advantage of being soft, smooth, cool, comfortable, and highly absorbent, which made it ideal for use in sports clothes.

Throughout the 1930's golf dresses pretty much followed fashionable lines. Unlike tennis, where the skirt became very short, the skirt length of golf dresses stayed true to the fashionable street length.
Street hats were also worn, unlike the visors of today.

By the mid 30s, with lounging and beach pyjamas becoming popular, some braver women began to wear pants or short to play golf.
This was more common, and accepted in France, and the Riveria, than in Britain or America. In the early 1930s the French woman's golf team  shocked British golfers and the public by wearing trousers in a tournament.

Yvette and her team-mates played golf in Europe until the outbreak of WWII.  Golf was so popular that tours of golf courses were organised around Europe.

Aviator Amelia Earhart helped women's pants gain acceptance in the 1930s, and she even developing her own clothing line, featuring dresses, blouses and hats as well as pants.


Actress Katharine Hepburn was an avid tennis player, swimmer, and golfer, and she chose to adopt pants, still considered menswear by many, to enjoy these activities. She carried this casual, cross-dressing style to her movies. 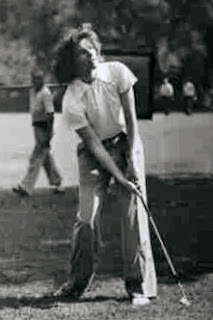 Women often wore rubber soled shoes for golf, often with short socks, or even their normal street shoes.  If heels were to be worn, then this little invention could be used.

Marian Herron played golf at the top level in the US throughout the 1930's, including a victory in 1934 at the Western Open, which was the top women’s tournament at the time. Her dress style was fairly typical of serious female golfers at the time.

These sportswear looks were also popular for spectators, either those following the professional or amateur circuts, or for those women watching 'their man'. These sporty Paris fashions by the House of Worth, featured in Good Housekeeping Magazine, April 1930.  Worth favoured the colours of red, navy blue and white, especially for spectators.
The thing NOT to wear to watch golf was a swimsuit.  Other wise this may have happened.

Are you a golfer?