Yesterday's post on the history of rain wear featured a photo of a very young Joan Crawford in the 1927 movie 'Twelve Miles Out.'.  Today, in continuing with the rain theme, and featuring Joan Crawford, I look at the 1932 South Seas drama film directed by Lewis Milestone, 'Rain.' 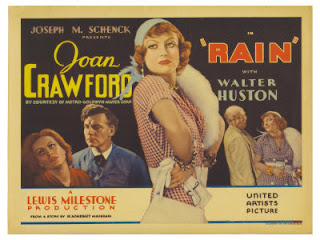 Crawford was loaned out by MGM to United Artists for this film, in which she stars as 'lady of the night' Sadie Thompson. Walter Huston is Alfred Davidson, the missionary who wants to reform her.  Although her makeup is heavy handed, I think Crawford still looks great, and her acting is very good - she totally owned the part and brought Sadie vividly to life. Variety magazine at the time disagreed, "It turns out to be a mistake to have assigned the Sadie Thompson role to Miss Crawford. It shows her off unfavorably. The dramatic significance of it all is beyond her range.... [Director] Milestone tried to achieve action with the camera, but wears the witnesses down with words. Joan Crawford's get-up as the light lady is extremely bizarre. Pavement pounders don't quite trick themselves up as fantastically as all that." Rain was not well received at the box-office either, perhaps not the cheery movie the depression era audience was wanting.

The plot of the film is based on the 1923 play Rain by John Colton and Clemence Randolph, which in turn was based on the short story "Miss Thompson" (later retitled "Rain") by W. Somerset Maugham. Gloria Swanson starred in the 1928 silent film version titled 'Sadie Thompson' and in 1953 a further remake was made with Rita Hayworth entitled 'Miss Sadie Thompson.'

The opening scene sees a troop of American Marines in wet weather gear marching in the mud through a torrential downpour, singing a witty ditty about the weather and the South Sea Islands. While they interact with he natives, and local Joe Horn, we find they are on the Island of Pago Pago.  We then see passengers from a ship arrive at the Island for an afternoon visit - they are all faceless, and instead we see their passports and hear their voices, indications of their nature none the less.

The passengers include socialite Mrs Robert McPhail and her husband Dr McPhail and Mr and Mrs Alfred Davidson, 'professional reformers'.   Much to their disappointment they need to stay on the Island for a couple of weeks, as there is a possible cholera outbreak onboard.  The other passenger, Ms Sadie Thompson, is not so disappointed.  A woman of the night, she 'likes the boys here', and nicknames one of them 'Handsome' - Sergeant Tim O'Hara, who of course then falls in love with her.   Sadie entrance is well done - we see her jewelled hands, then her high heeled feet and fish-net stockinged legs, and finally her face, which, as I mentioned earlier is over made-up with exaggerated eyebrows and lips and lots of eye shadow, with a cigarette between her lips.  It's quite a look, and it screams 'hooker'.

The photography is brilliant, with  lots of artistic shots of the rain and clouds, and then finally the sun breaking through.  Horn and Dr McPhail have a discussion about the lives of the natives and the reformers on board the ship and back in Chicago, while walking back to Horn's house, where they all will stay.   Mrs Davidson says the ladies must sew mosquito nets tomorrow as the bites will be horrendous - but they couldn't possible sew on the Sabbath, and protect themselves right away.  Meanwhile Sadie has unpacked her liquor and is showing the marines how to do the latest dance from the States with willing partner, Quartermaster Bates from the ship.  Mrs Davidson looks on disaprovingly. 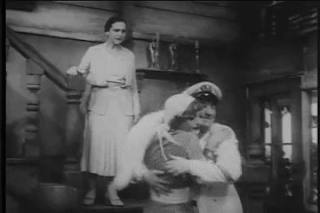 Apparently dancing is not allowed on the Sabbath either, and Mrs Davidson gets very cross.  As Bates leaves to return to the ship, we see the first glimpse of Mr Davidson's attitude towards Sadie, and she slinks off quietly to have 'tea' with the marines. Unfortunately for Alfred Davidson, he takes it upon himself to stop their party by turning off the music before the house is 'turned into a brothel' - the marines are not happy  and Sadie crossly says, 'when you bust into a ladies room you ought to get someone to introduce you fella!" Davidson at this point appears merely stuffy, and slightly strange, but not quite the stuff of fire and brimstone.

Davidson storms off, and his wife states, "I don't know what he'll do, but I wouldn't want to be in that little girls shoes."

There's more rain but the natives sing happily while they bring in the fish.  The Dr and Horn have another deep and meaningful chat about Davidson's beahviour, and when asked if he thinks she is a prostitute, Horn states boldy, "I don't know and I don't care,  What if she is? We've all crossed thresholds we don't want to brag about."  Sadie picks that moment to enter the room, and the discussion ceases, but Horn does advise her not keep company over the next few days.

Her view of Davidson is that she hasn't' met anyone like him, and she doesn't want to. "If he minds his business, I'll mind mine, but if he's looking for trouble, I'll see that he gets it." Davidson meanwhile is visiting the Governor to see if he can do something about Ms Thompson.

Davidson returns and visits on Sadie, telling her he has a gift for her - he wants her to atone for her life and all will be forgiven.  The fire and brimstone begins, but she admits to nothing but being a singer, and sends him away.

'Handsome' visits her, and he asks her plans. He convinces her that Sydney, Australia, is the place to go. He is planning to go there and get into the building trade when he quits the service in a few weeks.  She's adamant she can't return to the States, and agrees.


Sadie then gets a letter from the Governors office, ordering her back to San Franciso in four days time.  She is so upset that Handsome agrees to accompany her to see the Governor and change his mind. They pass Davidson on the way, and Sadie gets stuck into him. "You'd tear the heart out of your grandmother," she spits.

Before her departure, however, Sadie has a radical conversion experience and completely changes her ways - how surprising.  Arthur Davidson, too, has a change of ways and gives in to his lust for Sadie.  I don't want to give the ending away, but how it all plays out is the balance of the film.

Here is the full movie.