More on a summer theme today - a look at swimwear one hundred years ago.  I thought it best to look at the years leading up to 1913, though, just to see the difference, if any.

In the 18th century women wore "bathing gowns" to 'swim', or bathe - long dresses of fabrics that would not become see-through when wet, with weights sewn into the hems so that they would not rise up in the water. Men wore a form-fitting wool garment with long sleeves and legs, like long underwear, which changed a little over the next century.  Not only were they modest, but they protected the wearer from the sun, as suntans were definitely considered unattractive at the time.

In the 19th century, the woman's two piece suit became common—the two pieces being a gown from shoulder to knees plus a set of trousers with leggings going down to the ankles. Despite this covering, and thanks to Queen Victoria’s example, popular beach resorts often had bathing machines, small wooden sheds on wheels which were pulled by horses into the sea. The ideas was to avoid the exposure of people in swimsuits to the opposite sex, as it was not considered ‘proper to be observed in a bathing costume, and allowed women, to change into their swimming costumes and enter and exit the water discreetly. Often a swimming costume was hired with the machine – usually a "one size fits all" design made from a sturdy fabric, with a loose wrap tunic with tie belt and baggy drawers. Impractical for swimming, they were really just for bathing, or splashing around and getting wet. Large bathing caps were also worn to keep the elaborate bulky hairstyles of the day dry. 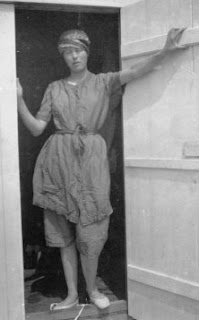 Costumes were hired as many people only went bathing occasionally, maybe on holiday to the coast.  Other couldn't afford special bathing wear, so would wear old nightdresses or long underwear, such as some of the girls in the photo below, taken at the Coolgardie baths in Western Australia in about 1900.


It was also considered of vital importance that men and women bathers swam apart, as mixed bathing was frowned upon or banned on most beaches, however in reality many rules were broken. Mixed swimming contests were against the law until 1913, and therefore women swimmers could not compete in the 1908 London Olympics.


With newly fought freedoms for women and dress reform in the early part of the new century, it was not long the question of the standards of dress on beaches was questioned. The accepted attire for lady swimmers in 1895 was a tunic and short knickers, but many women were criticised for being immodestly dress. Stripes were very popular for men and children

In 1907, Australian swimming athlete Annette Kellerman was arrested for wearing a fitted one-piece swimsuit on the beach in Poland. Annette Kellerman has designed her famous swimsuit to allow for serious athletic swimming, unlike conventional women's swimwear of the period, but it’s form fitting appearance was considered indecent by some, and it also showed her arms, legs and neck. She changed the suit to have long arms and legs and a collar, but still kept the close fit that revealed the shapes underneath. She later starred in several movies, including one about her life, and marketed a line of bathing suits - known as "the Annette Kellerman," considered the most offensive style of swimsuit in the 1920s and the focus of censorship efforts.


Also in 1907 men’s bathing attire was called into question, with beaches in Sydney calling for men to wear skirts or pants down to their knees for swimming. A protest resulted and men were allowed to wear shorter outfits, as worn by the Surf Lifesaving Clubs throughout Australia.

Despite opposition from some groups, the form-fitting style proved popular. It was not long before swimwear started to shrink further. At first arms were exposed and then legs up to mid-thigh. Necklines receded from around the neck down to around the top of the bosom. By 1910 bathing suits no longer camouflaged the contours of the female body. The yards of fabric used in Victorian bathing skirts and bloomers were reduced to show a little more of the figure and to allow for exposure to the sun. New York, as usual, was a step ahead of Australia.

Australia's first women Olympians, swimmers Fanny Durack and Mina Wylie, wore costumes very like those of Annette Kellerman at the Olympics in 1912.

By the 1920s women’s bathing suits were usually still a two-piece garment with a long singlet style top than could be worn over shorts, or tucked in. Fabrics now were finer jersey and flannel, with rubberized silk and satin began to be used. By the mid-1920s Vogue magazine was telling its readers that “the newest thing for the sea is a jersey bathing suit as near a maillot as the unwritten law will permit.”

In the early 1920s swimsuits still had to be of a suitable length - and you did get measured! 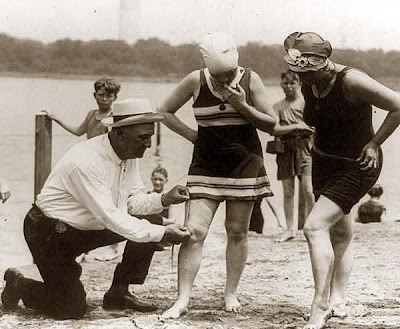 By the end of the 20s swimsuits, like dresses, were getting shorter and smaller, although still with a lot more fabric than many people wear today.

Here in North Queensland the only safe way to swim in summer is to wear stinger suits - swimwear that covers your whole body – much like Annettes Kellerman’s suit. Of course new materials, such as lycra, make these much more comfortable than Annette's suit would have been. The bonus is that they also protect you from the sun!

We tend not to wear them, but don't swim if stingers have been found at the beach, but if you are diving off shore from a boat, they are a must.  Just remember, if you do come swimming in North Queensland, they look best in black......but that's just my opinion! 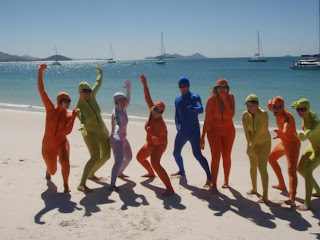