Today a black and white slipper-satin ensemble, which epitomizes the look and drama of 1930s. I can imagine Ginger Rogers wearing it as she dances gracefully with Fred Astaire....

Designed by Jessie Franklin Turner  (American, 1881–c. 1956) in about 1930, the ensemble includes two long-sleeved over-pieces, each of which is worn over the dress bodice to modify the silhouette and amount of skin exposure. Very clever, and typical of the innovative style of Ms Turner.  An American fashion designer. Turner was based in New York in the 1920s, 30s and 40s, and was well-known for her evening wear designs, many of which featured luxurious fabrics that she often designed herself.  She also used  interesting construction and unique designs, had has been said by some to be the one true fashion revolutionary in America - designing new styles, and not simply copying what was happening in Paris.  He designs often incorporated trains, as does this gown, and also this gown, below, made of shimmering subtle shades of satin bias cut diamonds, pieced together with sophisticated seaming. 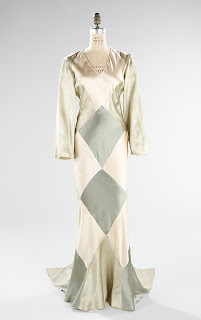 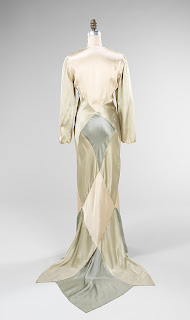 I absolutely love the diamond pattern and the beautiful flat seams, and the train is stunning. The sleeves puzzle me though, as they seem quite boring in comparison. Maybe it was designed to be worn with a cape, as was quite popular at the time.  One like this perhaps.

Or maybe the lady for whom it was designed had a stunning necklace she wanted to show off?  Or maybe the wearer was dark skinned, and the contrast of the pale fabric would have been more interesting. I can't help feeling that the dress would have been more stunning sleeveless, like the first gown, perhaps worn with long gloves. If the fabrics were brighter I think the dress would look too much like the Harlequin costume it was no doubt inspired by.  What do you think?

Turner began work in 1916 for Bonwit Teller's custom salon, and also designed under the name of Winifred Warren Inc. in the early part of her career.  In 1922 she opened her own shop at 200 Park Avenue, New York, specializing in draped tea gowns and unusual evening dresses of her own design, In the 1930s she moved her boutique to 410 Park Avenue.

You can see more her dresses at the Metropolitan Museum of Art's Costume Institute and the Art Institute of Chicago.