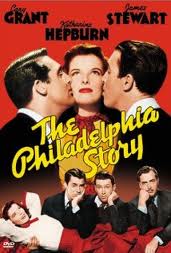 Today a look at another one of my favourite movies. If you have seen 'High Society' (1956) with Grace Kelly, you know the story - both are based on Phillip Barry's Broadway play 'The Philadelphia Story.' Barry wrote the play specifically for Katharine Hepburn, whose lead female character  Tracy Lord was inspired by real-life Philadelphian WASP heiress Hope Montgomery Scott (1905-1995), who had married a friend of Barry's.

After several commercial failures and being labelled "box office poison" by Photoplay Magazine in 1938, Hepburn returned to Broadway.  She ended up backing Barry's play, foregoing a salary in return for an estimated 45% of the play's profits.  The play opened in late March 1939 and ran for a full year with more than 400 performances and a nationwide tour.  Hepburn was back!  She then bought the rights to the play, and brought the story to MGM, picking her own  co-stars (James Stewart and Cary Grant), screenwriter (Donald Ogden Stewart), and director (George Cukor).  Cukor had already made four successful films with Hepburn in the 30s, including Holiday(1938) and Little Women (1933).

Hepburn's role as a rich, snooty, care-free socialite who is humbled and becomes a real-life, compassionate person when she really falls in love, struck home with viewers, and as well as lifting the public's perception of her, the film became a major box-office success,  breaking all records during it's run at Radio City Music Hall in New York.


The film also earned six major Academy Award nominations including Best Director, Best Picture, Best Actor, Best Actress and Supporting Actress, and Best Adapted Screenplay.   Donald Stewart won the award for best screenplay  and Jimmy Stewart won the Academy Award for Best Actor (his sole career Best Actor Oscar, and over Henry Fonda in Grapes of Wrath), but Hepburn lost the Best Actress Award to Ginger Rogers for her work in Kitty Foyle and Hussey to Jane Darwell for the Grapes of Wrath.  Hepburn did win a 1940 New York Film Critics Circle Award for her performance however,  and the film was named one of the ten best of the year by Film Daily.

The chemistry between Grant and Hepburn is wonderful as it was in 'Bringing Up Baby' (1938), and watching Tracy Lord finally grow up and become capable of loving someone other than her self is reminiscent of the coming of age of  Jane Austin's 'Emma.'  Stewart is wonderful too, but he does seem so much better suited to his witty and beautiful photographer colleague that I spent most of the movie wanting to kick him and ask him what he was doing mooning after Tracy - his 'golden girl.'

Ruth Hussey as Elizabeth Imbrie is definitely my favourite character - calm, cool, well-dressed and witty, her one liners are so quick you almost miss them. When they are first shown into the mansion's 'south parlor,' she says to Stewart's Mike, 'What's this room? I forgot my compass.'  And when Grant's CK Dexter-Haven asks "Can you use a typewriter?", her reply is "no thanks I have one at home." Love her!

I thought Mary Nash's portrayal of Tracy's mother Margaret was also outstanding - she has some of my favourite lines. When Tracy congratulates her for standing up to her errant father, she replies, "Yes, now I have my self respect and no husband."  Tracy and Margaret both agree that their first choice of husbands was unfortunate, and Margaret says, " We both might face the fact that neither of us have proved to be a very great success as a wife." Tracy replies, " We just picked the wrong first husbands, that's all."

John Halliday as Tracy's father also grew on me during the film, especially when he showed his human side and told Tracy some home truths.  Virginia Weilder as little sister Dinah is also very good, if slightly precocious, and Roland Young as Uncle Willie is also wonderful.  Weidler retried from film at age 17, after 40 movies, and Young was the original movie Watson to John Barrymore's Homes in 1922.

In 1995, The Philadelphia Story film was deemed "culturally, historically, or aesthetically significant" by the Library of Congress and was selected for preservation in the United States National Film Registry.  It was also recently selected as one of the top 100 American films of all time by the prestigious American Film Institute.

I found a 2010 version of the DVD at the op shop (Warner Brothers), and the quality of the picture is outstanding. If you can get a copy , watch it - it's even better than 'High Society,' - there's no singing, just great acting.  Well except for Stewart's drunken 'Somewhere over the rainbow."  Here's a trailer to get started.