I found this ad the other day - from the Australian Women's Weekly 30 September 1950.

A brand of baked beans other than Heinz - and made in Brisbane!

This is the only ad for Rex baked beans I have been able to find, although I did find out that Foggitt Jones & Co. were bacon and ham curers, who formed in 1904.

The pigs for processing were brought to Oxley Station by train and herded down the main road to the factory in the early hours of the morning where they were penned, before being 'processed.'

The factory began making cans of camp pie, so the move to baked beans (usually ham flavored) wouldn't have been a huge step.

If the Brisbane Courier from November 14th 1931 is to be believed, Foggitts shipped in live turtles from the Great Barrier Reef, straight to the Foggitt Jones wharf where they were turned into canned soup! 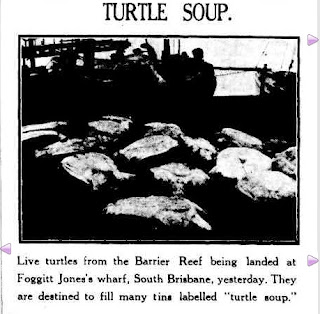 Turtle soup first appeared in the 1800's, with colonists in Australia and North America eating the animals - it also became a famed Louisiana creole cuisine - Soupe a la Tortue.  Some recipes gave detailed instructions for cleaning turtles (general consensus seemed to be to cut off the head first, then go for the innards and flippers), but I imagine buying canned turtle would have been much easier - like buying canned crab today - and canned soup even easier.   Recipes for the first mock turtle soups appeared around the same time - the soup was so popular that hostesses would prefer to offer a fake version to no turtle soup at all. And Foggitt Jones weren't' the only ones to make it. Heinz had a version, and there were also other Aussies brands -

Preserver, in this context, doesn't mean what it does today!

Turtle soup was a big thing in the 30s. It featured on the menus of presidents and royalty.  In 1936 it was on the menu of the expensive dinner birthday party for Mrs Woolcott-Forbes, thrown for her by her husband. 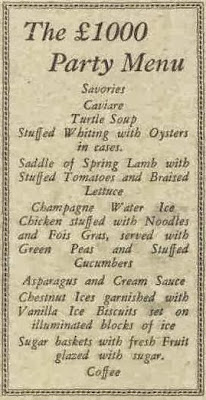 The 1000 pounds was for 100 people, which makes the dinner around $850 per plate today. Expensive stuff that turtle soup! 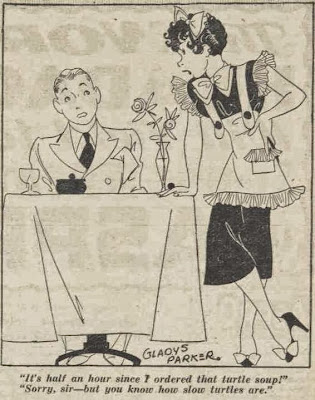 By WWII the soup, like many canned products, was hard to get, as were turtles in the wild.  Some sailors, such as these guys inboard the HNMS KXV (Her Netherlands Majesty's Submarine) still managed to find a few though.

The soup was still eaten in the 50s and 70s, often as a dieter's food.  Rex Harrison ate the soup to lose weight for a film role in 1972. 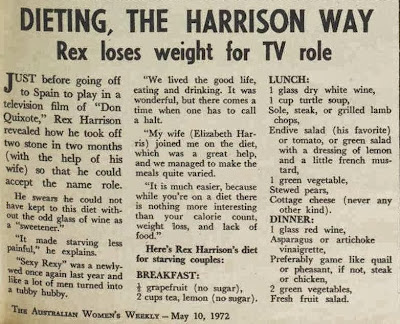 Seven species of sea turtle are found throughout the world. Six live and nest here in Queensland, Australia. Native Australian's are allowed to catch and cook turtles here in Mackay for special ceremonial days, as they have done for thousands of years, but thankfully turtles are now fully protected, and off the menu for ordinary people.   In the 1950s you were not able to catch turtles on beaches, but apparently those caught in trawler nets were fair game (warning, this article from 1954 is a bit gross).

Mackay has it's own Turtle Watch Association, which you can find here.  Like me, they prefer turtles like this - alive!

I have never toasted turtle, and don't intend to, but I do like the old Foggitt Jones & Co building in Brisbane. If you walk over the Go-Between Bridge, you can see it too. 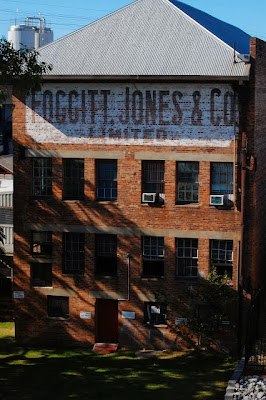