Today a mid-century house designed by Warwick Kells in 1950.

Mr Kells was a Sydney architect, who worked for some with the Australian Aluminium company promoting their products in the building industry, and later worked as a manager for Commonwealth Engineering (Comeng), where he was involved with the construction of Unilever House.

At 14 storeys/53m it was one of first curtain wall scrapers in Sydney and it was completed the year nearby Opera House was started, 1957. It was demolished in 1994 to make way for the controversial Bennelong Apartments.

This house plan featured in the September 1950 issue of Australian House and Garden magazine, with the title "Small House for Big Living."  I love the large deck, or cantilevered balcony, and the wall of windows, and there is a clerestory window to give light to the large internal space. 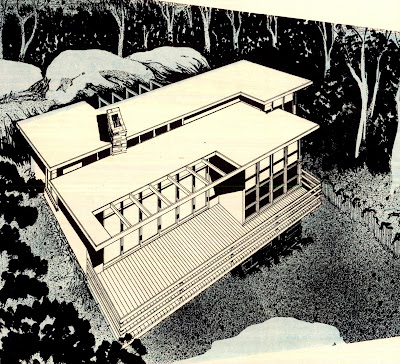 The prominent feature of the home is the open plan living, dining and kitchen area, and I like the way the kitchen stove and fireplace are back to back, and central in the room.  The two bedrooms are close to the bathroom, and both have large windows to look out to the garden. 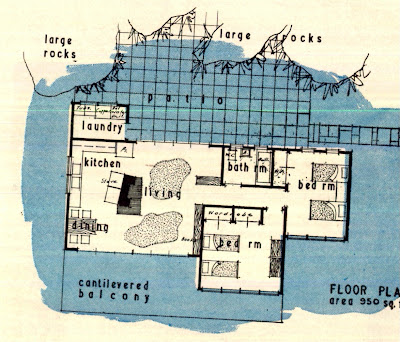 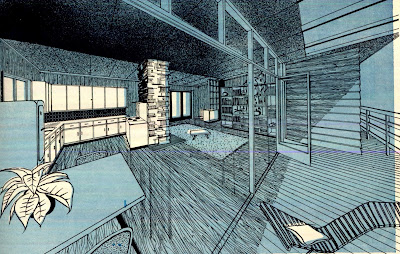 The house is typically mid-century modern, and not only was the design suited to the steep site for which it was designed, House and Garden stated that it was "suited to the Australian way of life, and is a refreshing change from many of the stodgy homes being erected today."  Yo go guys!

I think this house would be perfect for us once the kids leave home. Maybe I'll start looking for a hill now...