Diets really became popular in the 1930s.  The Hollywood, or Grapefruit, diet was developed then, with lots of women striving to look like their favourite actress. In this low calorie diet (800-1,000), most people will lose weight, but it has nothing to do with grapefruit having a fat burning enzyme, it’s just a nutritious low-calorie fruit (66-84 calories per serving), loaded with vitamin C and fibre. Unfortunately unless it’s a pink grapefruit, it’s also quite horrible without sugar. Most versions of the Grapefruit Diet include a small variety of foods for breakfast, lunch, dinner, and at bedtime, with half a grapefruit at each meal.  If  could replace the grapefruit with, say, mango, I’d do it. But grapefruit, you have to be kidding.

And what to do with all those grapefruit peels? Make a dress of course.


‘The Lancet’ noted in 1933 that in “these days of ‘slimming’ there was no more popular subject of discussion among the ladies than the reduction in weight”. Anxiety about excess weight was exploited in weight loss books and advertisements of “slimming” foods such as Ryvita and Ryebic crisp bread, slimming teas, tablets, remedial products such as Linia Shorts intended to massage away the abdominal “danger curve” and vibration machines which promised to exercise “All the body without effort” and reduce obesity “without drugs or dieting”. 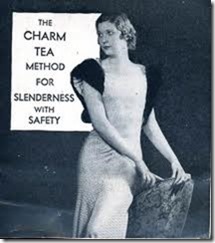 The new middle class of the 1930s with it’s sedentary lifestyle, particularly among the men, saw an average daily intake of 3,500 calories, compared to about 2,500 calories for working class people.  The working class were of course facing economic depression, high unemployment and poverty – much like now really – getting enough to eat would have been more of a problem for them than losing weight.

The fashions of the 1930s also employed a long, lean silhouette. Women wanted to look like their favourite movie stars – Jean Harlow, Greta Garbo, Marlene Dietrich, Carole Lombard. Bette Davis – but often these woman also had to struggle with their weight. 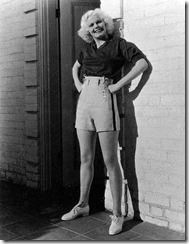 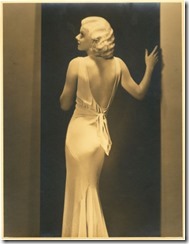 In between films, Jean Harlow would eat whatever she wanted and gain some weight.  When it came time for filming a new movie,  Harlow would have to put herself on a strict diet of salads and vegetables to get back to her thin movie weight.

Meanwhile other affluent women were going to weight loss camps, as these photos from a 1930s Life Magazine show. 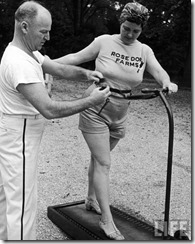 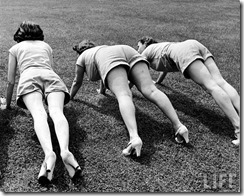 Don’t you love the high heels for exercise?!

Another secret to a girlish figure was Bile Beans, a quack remedy for the flu in the late 1800s, and used for “biliousness” and weight loss in the 1930s. Basically they were laxatives, thanks to a bitter ingredient called aloin disguised by cardamom, peppermint oil, and wheat flour, and wrapped in an attractive black gelatine coating. Delicious!

On a personal note, I have lost a whole 2.5 kg this week, in my first week on the Fatty liver diet!!.