These holiday I am only an armchair traveler. It's summer and I have a pool, banana lounge, and a few good books - but I do love the thought of travelling, one day.  My middle daughter has just flown off to Melbourne to stay with her grandparents for two weeks - her Christmas present.  The trip by plane is just under four hours, with a change over in Brisbane, and she is able to take up to 15 kg (33 pounds)  of luggage. This sounds a lot, but she of course wants to take books, presents, and almost her entire wardrobe, as Melbourne's weather is unpredictable - it's 38 degrees Celsius there today, but could easily drop to 18 tomorrow.

My packing advice - roll, don't fold....
- two sun-dresses
- one 'nice' dress
- leggings (for under dresses if it's cold)
- a cardigan
- a pair of dark jeans
- three t-shirts
- one long sleeve t-shirt
- swimmers
- a sarong (great as a blanket on the plane too)
- a hat and umbrella (it's a drought but it is liable to rain in Melbourne)
- two scarves/bananas
- five lots of underwear inc.socks
- one pair each runners (she has red converse), flat walking sandals, 'nice' sandals and thongs
- plastic grocery bag for dirty clothes, and zip lock bags for sun-cream etc that may leak

She has a small back pack style bag, and having had my suitcase lost between Mackay and Melbourne before, I always recommend packing a days clothes and toiletries, as well as a book and the sarong and hat. 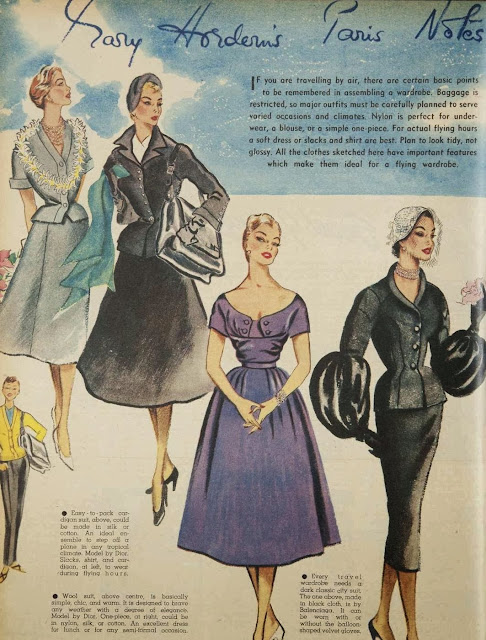 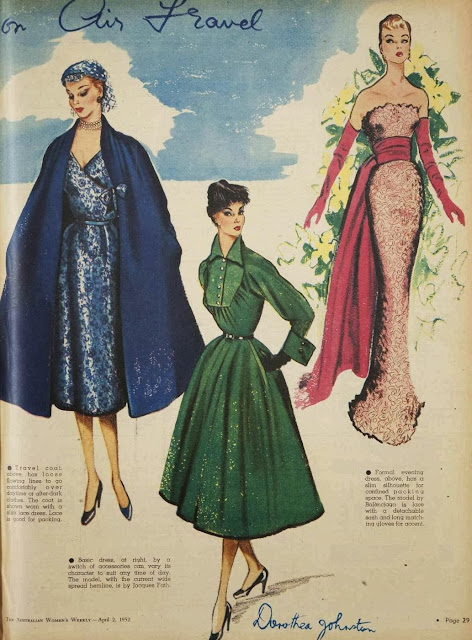 First class air travelers in the 1950s and 60s were allowed to take up to 66 pounds (30 kilos) of luggage, and economy 44 pounds (20kilos).  Of course a lot more than just baggage allowance has changed since then, the golden age of air travel, with roomy seats and a stylish flight crew. But truth be told, it was a glamorous luxury few could afford. Even into the 1960s most people went by ocean liner, as did my parents when they went to England, and even when they returned (plus my sister and me) in 1971.  You were able to take a lot more luggage by ship, and the trip was seen as a holiday in itself - travelers were urged to take along 'makings', that is the makings of a fancy dress costume.  I have, somewhere, photos of both my grandparents in the 1950s and my parents in the 1960s, in fancy dress on a ship. Here is packing advice from 1964. 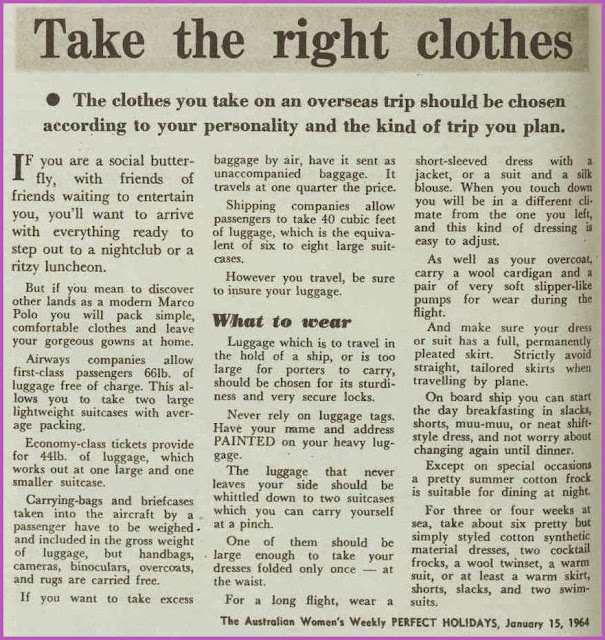 Over the years, air ticket prices have dropped approximately 40 percent, making it much more reasonable for the average person to take to the skies.  By the time we went to Sweden in 1977 our whole family went by plane, although many of our belongings followed by sea, as we were to stay for twelve months. Today to travel by sea you usually have to book a cruise. Times have changed.  This article from 1961 looks at flying 20 years in the future. 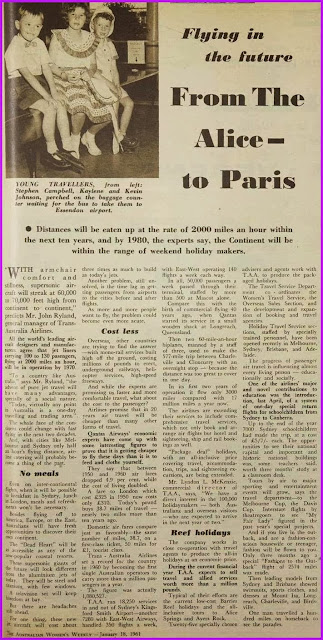 I wonder how we will be travelling in another 50 years time? I'll make do with n armchair for now....
Deb xx