Vintage Plane Travel and Pan Am

Yesterday I looked at packing for plane travel.  Of course these days plane travel is a necessity, not a luxury. In 1958 approximately 38 million people flew, compared to 809 million 50 years later. Wow! No wonder things have changed - imagine washing all those cups in between flights. I still hanker for that old-fashioned service and style though - comfy chairs with leg room,  real crockery, tea in a pot......


I'll just have to make do with episodes of 'Pan Am', my new favorite tv series.

Set in 1963, the fashions are wonderful - the gloves, the hats and the hair.  And the attitudes- sexism and racisim - of the 60s are also portrayed, as well as the politics of the time, including The Cold War. The show is also very funny - here are Maggie, in rollers, and Laura, in her 'foundation garment' standing on a bed in Rangoon because of a snake in the room. 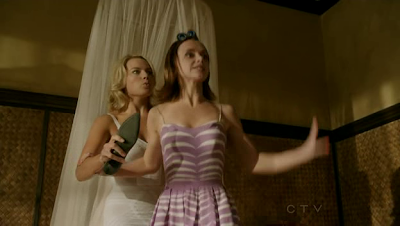 From the 1920′s until its demise in 1991, Pan American Airlines symbolized all that was luxurious in air travel - the Lockerbie disaster on 21 December 1988 marked the beginning of the end for Pan Am. Pan Am stewardesses had beauty and brains - many were college educated and spoke several languages.  The airline was one of the first in the 'jet-age' and the first carrier to adopt Boeing’s 747 - they broke records with a New York to New York  around-the-world trip.

Originally  opened as the Pan Am "Unit Terminal Building (UTB) on May 24, 1960, the Worldport ceased operations on May 24, 2013 -  it is expected to be demolished by 2015. You can help preservationists protesting against the demolition of the Worldport here.

The pilots and the girls in blue traveled the globe, looking after many of the world's rich and famous, and were indeed almost celebrities themselves - "my Pan-Am bag always get's me the best table" says stewardess Maggie Ryan (Christina Ricci) in one episode of the TV show.

Just carrying a Pan Am bag signified prestige - bags were presented at check-n in the 1960s to Pan Am first class passengers at check-in, including the Beatles, JFK, Judy Garland and Joe DiMaggio.


If you haven't seen it, the complete series of fourteen episodes of Pan Am is available on DVD, or you can find it here. Sadly, although a wonderful success, producers were unable to secure a deal for a second season.

You can read more about the history of Pan Am here or buy your own Pan Am bag here.