Salvage, bombing , blackouts and being seen in the dark in 1942

After the attack on Pearl Harbor in December 1941, a salvage team immediately began work. They started work on the Nevada, which had suffered severely from a torpedo hit, plus many bomb hits and near misses. On 7 February 1942, as efforts to refloat the ship were about to bear fruit, two men lost their lives to hydrogen sulphide gas.( Nevada was refloated on 12 February 1942). 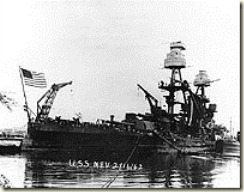 The Nevada before sinking-  source

In Victoria, Australia on the same day, because of bans on transport, a racehorse trainer from Ballarat, E. H. Nichols, led his two horses, Coline and Triuncius to Moonee Valley Racecourse in Melbourne, while riding his pony Inverarie, This was a distance of nearly 80 miles. This was apparently a practice common in the 1880s when' trainers walked their horses long distances to compete at meetings. source

The main news of the day the Melbourne Argus was however the Japanese air attacks of Singapore and Java and the ‘Soviet thrust towards the sea of Azov’, just north of the Black Sea. 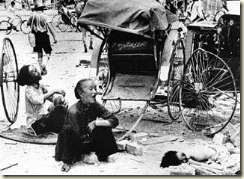 Malay women mourn the loss of a child during one of the frequent Japanese air raids on Singapore during which thousands died. Source

While in New Zealand, the first prison sentence in NZ for a breach of the blackout was imposed on a householder whose house showed a light visible from the sea. He was sent to jail for the weekend.

During the war, everyone in Australia, New Zealand and of course the UK had to participate in the blackout, to prevent any glimmer of light from escaping and aiding enemy aircraft during the bombing raids. At home people had to cover their windows and doors at night (before sunset) with heavy blackout curtains, cardboard or paint, and outside porch lights and street lights were switched off or dimmed and shielded to deflect the light downward. Light bulbs were sometimes painted purple or dark blue. Traffic lights and vehicle headlights were fitted with slotted covers to deflect the beam down to the floor. 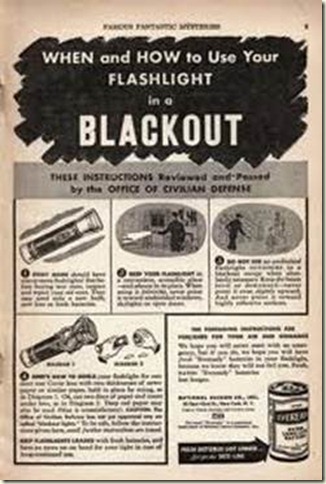 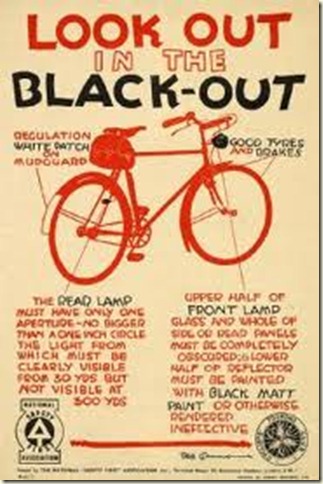 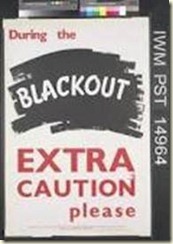 Because of the lack of street lighting and dimmed traffic lights there were of course many accidents. People were encouraged to walk facing the traffic and men were advised to leave their shirt-tails hanging out so that they could be seen by cars with dimmed headlights, and all people were advised to wear white at night. Luminous strips were painted on the roads and street lights to help people see a little, and luminous arm bands, luminous discs, badges, and luminous adhesive tape could also be bought and attached to clothing. 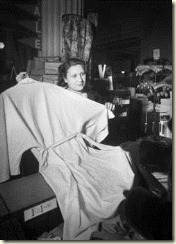 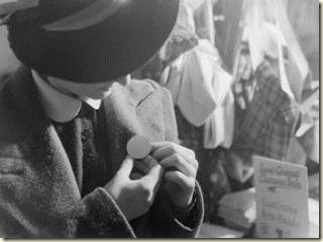 A female shop assistant at Selfridges in London, displays a white raincoat for use in the blackout, and also at Selfridges, woman pins a luminous disc to her jacket lapel. These discs were on sale for 2d per dozen.

Detachable white collars were also popular, and magazines featured articles on how to make them at home. 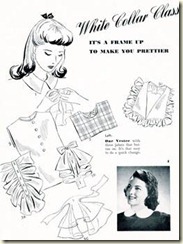 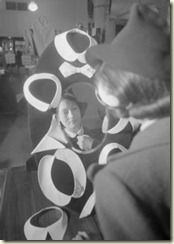 It was important to still be fashionable, while being safe, and there were even luminous flowers available to pin to your outfit. These flowers were prettier than the plain badges and luminous discs , but did the same job - making the wearer more visible . 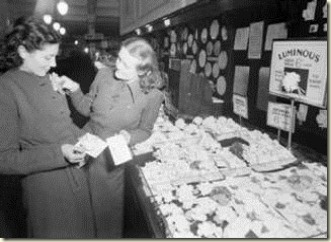 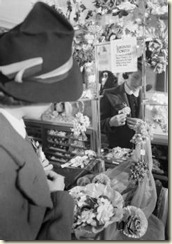 People also put white coats or luminous tags on their pets to make them more visible at night. 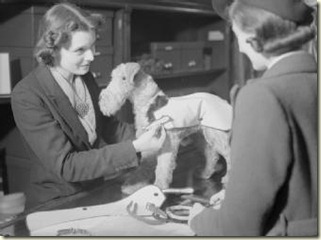 So turn out those lights ad shut the curtains – sleep tight tonight!