It's school holidays here, and my seven, almost eight , year old daughter is spending her days drawing Disney princesses. Actually, so are her older sisters. Not sure why, but it's quite cute.

So today's movie is Snow White, from 1937, the first full-length cell animated feature film and the earliest in the Walt Disney Animated Classics series. It was first released just before Christmas 1937, and released across the US in February 1938 - often touted as ‘Disney’s Folly’ in the media by a movie industry that doubted the viewing public would sit through a feature length animated film. Well, we all know how that turned out.  The movie was released in Australia in June of that year.  During the initial release it earned $8 million worldwide, and (adjusted for inflation) remains one of the top ten performers at the North American box office. 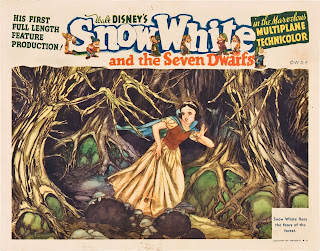 Everyone knows the story of Snow White, so I don't want to got into the plot, but I do want to look at some of the names behind the characters - especially the voices.

Adriana Caselotti (May 6, 1916 – January 18, 1997) played Snow White, the young princess. She was an American actress and singer who was named as a Disney Legend in 1994 because of her role as snow white, an was the first female to receive the award in the voice category.  Around 150 girls auditioned for the role of Snow White, but none seemed right to Disney. Adriana got the role after gaining an audition when her music teacher father was on the phone to one of Disney's assistants, and she showed how she could sing shrilly like a child in the background.  She was paid a total of $970 for working on the film (now worth about $16,000), but being under contract with Disney, they prevented her from appearing in further films, even for Disney. They didn't want to "spoil the illusion of Snow White."

The only other credited work Caselotti did following her premiere was an uncredited role in MGM's The Wizard of Oz (1939); she provided the voice of Juliet during the Tin Man's song, "If I Only Had a Heart", singing the line, "Wherefore art thou, Romeo".  She did do several promotional spots for Snow White and the Seven Dwarfs, signing memorabilia - now that wouldn't spoil the illusion! She also guest-starred on an episode of The Julie Andrews Hour in 1972, singing "I'm Wishing" and "Someday My Prince Will Come" with Julie Andrews.  She later wrote a how-to book, Do You Like to Sing?, as well as singing opera. at the age of 75 one of her last jobs was re-recording "I'm Wishing" for the Snow White Wishing Well at Disney Land. 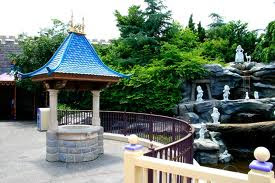 While Snow White was given a little girl's voice, to enhance her innocence and purity, the Evil Queen/stepmother  has a full, womanly voice - Walt Disney really knew what he was doing.  The Queen's voice was that of Lucille La Verne (November 7, 1872 – March 4, 1945), an American actress who began acting as a child, and made her Broadway debut in 1888. At the age of 14 she played both Juliet and Lady Macbeth, and in 1914 began acting in films, where she often played the role of the scolding, vengeful woman.  In the film the Queen transforms herself into an old crone, and not only did Lucille also do that voice,  she was also the Disney artists' model for the character.


The handsome prince was played by Harry Bayless Stockwell (April 27, 1902 – July 19, 1984), an American actor and singer and father of actors Dean and Guy Stockwell.  He made his film debut in the 1935 film, Strike Up the Band, and he was also a noted Broadway performer. In 1943, he succeeded Alfred Drake as "Curly", the lead role in Broadway's Oklahoma! until 1948. He was actually quite handsome, don't you think?

You can see the movie here from you tube, if you don't' have it on DVD, or, if like our version, it's scratched form too much viewing.

We're on to Sleeping Beauty next, 'sigh'.