I have spoken before of “Dig for Victory’, a publicity campaign urging householders to grow their own vegetables as a contribution to the war effort. In Australia, this was launched by the Prime Minister, John Curtin, in January 1942. According to the same magazine, the idea of “Garden Armies” was launched in February 1942 at the Melbourne Town Hall, with the aim of forming “teams of girls , who will dig for victory instead of playing basketball or hockey,” growing vegetables throughout every suburb, wherever they could get land. The article continued with the idea that “Housewives are asked to give an hour or 2 each week to help with the watering and weeding of plots.” Here is the article, with photos.  They also had a “Summer Girl” Quest to help raise funds and awareness. 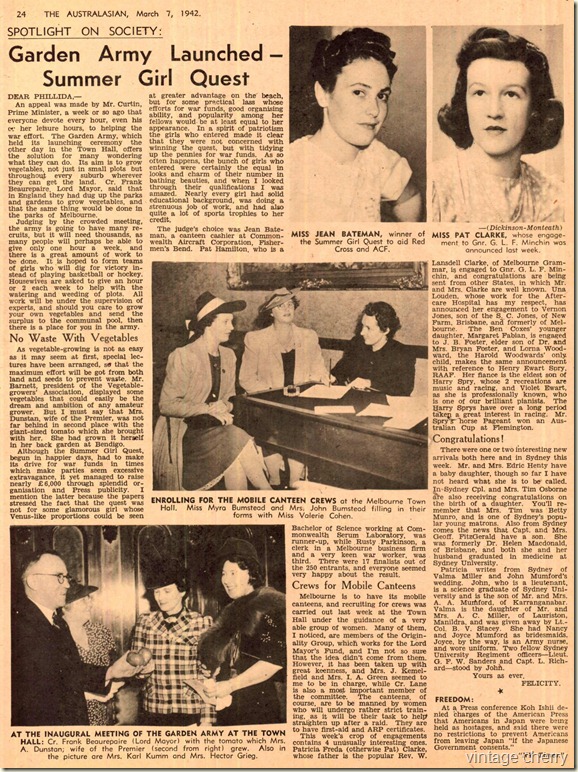 Well, I have done two whole weeks on my WWII ration diet.  I have had a few wines and the occasional Guinness,  but my butter, cheese and sugar has been severely restricted.  The result?  I have lost weight!  Only 1.5kg over the two weeks, but that is better than I had been doing.  My bust measurement also went down an inch, and my waist half an inch.  Those hips didn’t move, however! So I am happy with the results so far, and I will definitely continue with the diet.  I won’t show every meal, but I will try and post new recipes occasionally.

My cooking skills are also improving, as I try and use what’s in the fridge to make dinner.  This has also saved money – usually we do a big weekend shop, but I put it off this week until the fridge was empty.  It Wednesday and I am still going , with only needing to buy a litre of milk and  some cat food.  Pet food was also rationed during the war, so I will start experimenting with pet food too!  Last night the dog ate the left over soup/stew that was a bit old, mixed with some tinned fish for cats – he loved it.
So tonight's dinner is a variation of beef Bourguignon – this time with red cabbage instead of carrots, and no bacon.

And to the Wednesday Wedding photo – two from Melbourne: 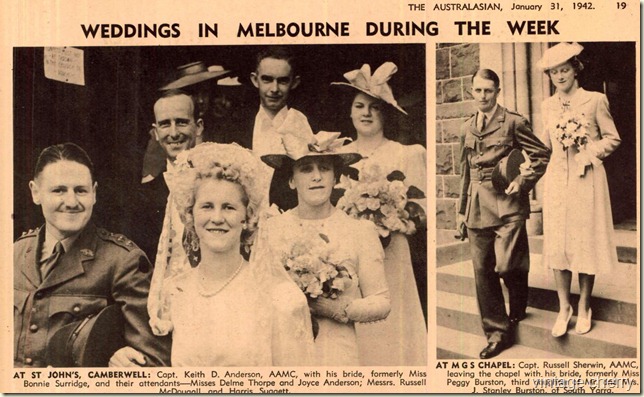 Have a lovely vintage day
Deb xx
Posted by Deb Clark at 10:01