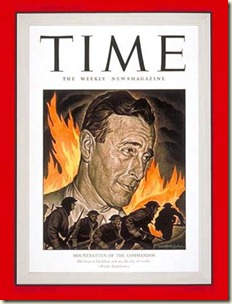 Lord Louis Mountbatten on the cover of Time Magazine, 8 June 1942.

Just after midnight on 8 June 1942, Japanese submarine I-24 surfaced and pointed its deck gun towards Sydney, with orders to aim directly at the Sydney Harbour Bridge. As they travelled in a north west direction towards the coast, 10 shells were fired within 4 minutes at Sydney’s Eastern suburbs including Rose Bay and Woollahra. Only one of I-24's shells actually exploded, demolishing part of a house outside Yallambie Flats where a woman sleeping on an enclosed veranda was slightly injured by flying glass. The Australian authorities believed that the Japanese may have been using armour-piercing rounds intended to hit steel plated ships. 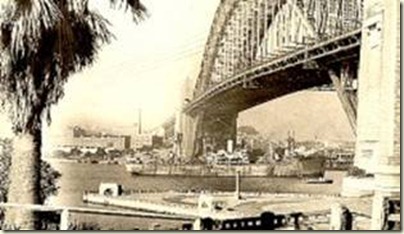 Of the other unexploded shells, one went through the double brick wall just below the gutter line in Grantham Flats in Rose Bay, the home of Mr Ernest Hirsch and his family. The shell skidded across the floor of Mr Hirsch’s mother's room and went through another 2 internal walls, coming to rest on the stairs where it was discovered by Air Raid Warden Harry Woodward. Mrs Hirsch was covered in broken bricks and her bed was broken by falling debris, but she escaped unharmed, as did Mr Hirsch’s wife and 18 month old son in the next room. Mr Hirsch suffered a fractured foot when he was buried under a pile of broken masonry. The unexploded shell was carried by Harry Woodward and two others to a nearby park where they temporarily buried it. The Navy demolition team recovered it later for detonation.

Another shell landed in Bradley Avenue, Bellevue Hill destroying the back rooms of a house and damaging the house next door, and another shell hit the gutter outside a small two-storey grocery store in Woollahra. It shattered all the windows in the building, and the occupants, including a mother and her two children, hid under the bed. When they eventually came down stairs they found their shop was wrecked. Warning sirens eventually sounded about 10 minutes after the last shell had been fired. The air raid sirens sent people rushing to their shelters, but may people didn’t realise what the sirens meant, and many turned on their lights to see what was happening. Not the best strategy when under attack! 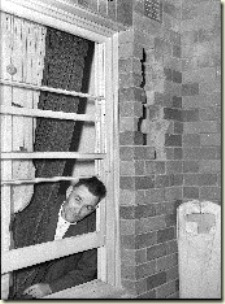 At about 2am, just after the shelling of Sydney’s eastern suburbs, there was a short bombardment off Newcastle, 160 kilometres north of Sydney. Another Japanese had been ordered to attack the Newcastle shipyards. 34 shells were fired from a position at the mouth of the Hunter Rive, with most of the shells landing in the vicinity of Customs House and the power station. All but one failed to explode but there was still some damage to buildings and houses. The attack lasted about 20 minutes, until just after fortress gunners fired in reply.

Although neither attack caused death, they did scare people, and prompted a few more Sydneysiders to depart for the Blue Mountains and the interior country-side.

As a salute to the Royal Jubilee, here is a lovely photo of Queen Elizabeth visiting the Blue Mountains in 1954. 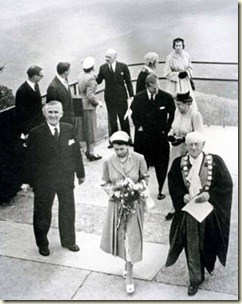