When I was a little girl I either wanted to be a veterinarian or a nurse. I loved animals, but I thought looking after people would be good too, and nurses always seemed so brave and strong, and somehow romantic.  We learnt about Florence Nightingale at primary school, and how she introduced strict practices governing sanitation, training, and hospital organisation during the Crimean War (1853-6) which were really quite revolutionary. I really wanted to follow in her footsteps.

And I wanted a really cool uniform.  I mean, really, how good does this girl look?

That was, of course, until I realised I couldn't stand the sight of blood.  Or vomit, or any other bodily fluid really

My best girlfriend decided to be a nurse, and I still admire nurses.  I think they do a great, often under appreciated, job today. If nursing today looks hard, how about those early nurses,especially those who went to the First World War and the Boer War. Just imagine what they went through - Living away from home in cramped accommodation, unsanitary working conditions, 18 hour days, horrendous wounds to treat, threat of death as they worked.  Sounds great doesn't it?

Ellen Julia (Nellie) Gould was a nurse at Royal Prince Alfred Hospital, Sydney, and was appointed the third matron of the Hospital in 1891. Along with Jane Bell, Rose Creal, Maud Kellett and others she founded the Australian Trained Nurses Association in 1899, the training and education centre for civilian nurses for military service during the Boer war and in WWI. The Association would later become the Australian Nursing Federation and form the foundations of modern nursing regulations.

In February 1899 Miss Gould was asked to help form the Army Nursing Service, and she become one of Australia's first Boer war Nurses. In May of the same year the first 26 official military nurses were sworn in, hand picked by Nellie Gould herself, they all had more than seven years of nursing experience. The New South Wales Army Nursing Reserve was the first women’s military nursing body, officially formed in August 1899 and deployed to Africa.  Each of the other colonies (federation didn't occur until 1901) sent nurses either privately or self funded.

The nurses did such a wonderful job, that later in 1902 an order was given for the formation of the Australian Army Nursing Service under the control of the Federal Government, which then occurred on 1 July 1903, now celebrated as RAANC Corps day.

When war broke out in 1914, the Australian Government raised the first Australian Imperial Force for overseas service. Nurses from the Australian Army Nursing Service (AANS) Reserve and from the civil nursing profession were recruited to staff the medical units. The women of the AANS were professional, fully trained nurses who required a minimum of at least three years hospital training in medical and surgical nursing for entry into the service. Female doctors were not permitted to join the medical services, because it was thought women would be too "delicate" for war medical work. The first convoy of twenty-eight Australian and ten New Zealand troop transport ships sailed for the Middle East from Albany, Western Australia, on 1 November 1914 with their RAN and Japanese escorts. Nellie Gould was on the Euripides as part of the AIF contingent and commissioned to set up the Australian General Hospital (2AGH) in Cairo. Part of the job of the AANS on their six week journey was to conducted medical orderly training for the  Australian Infantry Forces, male ambulance personnel and members of the regimental medical detachments, as females were not permitted to serve at the front line.

Many AANS worked on ships during WWI—troop transport ships, hospital ships and transports utilised to carry casualties (‘black ships’). As well as voyages to and from Australia, there were evacuations from Gallipoli, the transport of casualties in the Persian Gulf, evacuations from France or the Middle East to England, and evacuations from German East Africa.  Nursing onboard ship proved very different from civilian hospital work,  and below-decks wards which were poorly ventilated could be highly unpleasant, hot and smelly, particularly near the tropics, and coal dust from the ship’s funnels could also get in and cover everything.  Often the wards had to be fumigated with sulphur to improve the air quality.

While conditions at sea could be very primitive with a high probability of enemy submarines, mines and surface raiders sinking the ship, many AANS members sought sea duty as a change from the hot tropical climate of the Middle East or the freezing cold of European winters. Others saw transport duty as an opportunity to return home—and it was the best opportunity to nurse a large body of Australian troops, which was not usual unless they worked in one of the three Australian general hospitals located at different times in Egypt, England and France.

The first battle casualties for the nurses of the first convoy were German prisoners, 36 sailors and 14 officers who had survived the sinking of the German cruiser Emden on 9 November 1914. The Germans remained with the ship until its arrival in the Middle East.  An expedition called the Australian Naval and Military Expedition Force was also sent to the German colonies in the Pacific, including Rabaul. Accompanying the force was the Grantala , the first to be fitted out as an Australian hospital ship during WWI.

In Cairo, Egypt, there was a one thousand bed hospital, made of tents and without any floor covering.  It was staffed by 1 Matron, 15 Sisters and 30 Staff Nurses with male medical orderlies from the Australian Army Medical Corps (a slightly different ration than hospitals today). By 20 January 1915 when Ms Gould arrived she  took charge and in 24 hours  prepared the hospital for the influx of casualties which followed the first landing in Gallipoli. One of her nurses recorded that they admitted over 100 wounded soldiers that first day.  Other nurses went to work on British hospital ships off the African coast.  The floating hospitals, painted white with a green band and with prominent red cross, that enjoyed the protection of the Geneva Convention, were usually converted passenger liners or merchant ships with surgical facilities.

Once the extent of the carnage in Gallipoli became evident, many of the nurses in Egypt were seconded to the ships sailing there. The ships were anchored less than one-half mile off shore, and the nurses watched helplessly as Allied soldiers were mowed down. Thirty five Hospital ships and ‘black’ transport ships, flying their ‘Blue Peter’ pennant when full, ferried thousands of wounded and sick soldiers between the Gallipoli Peninsula and medical facilities on the Greek islands of Imbros, Tenedos and Lemnos, and further to Alexandria, Malta and England. Over ninety thousand sick and wounded were evacuated from the area, and at least one hundred Australian nurses played a major role in this allied nursing effort.

The wounded could only be evacuated at night, although medical personnel worked around the clock. Some patients had been patched up at filed dressing stations, but others came straight from the front line – not just Australians but New Zealanders, British, French and Indian. As well as dealing with wounds, unsanitary conditions and lack of water, because they were located amid warships, they were also in the line of fire from the enemy. The Marquette, carrying both hospital supplies and munitions, was torpedoed and sunk in the Gulf of Salonika in October 1915. Ten of the forty nurses were killed and some of the survivors were invalids for life.

Throughout the war, the Nursing Service served wherever Australian troops were sent, including Burma, India, The Persian Gulf, Egypt, Greece, Italy, France and England.  They also went to other countries when needed for British troops. On the western front nurses worked at a variety of units--large general hospitals; hospital trains; hospital ships; casualty clearing stations; and closest to the front lines, field ambulances.  Not only did they face the sort of wounds they had been trained for, but new ones, such as the effects of gas warfare, and shell shock.

Towards the end of the war many Australian nurses went to Britain to work in the convalescent hospitals. Ellie Gould was appointed matron of the Australian Auxiliary Hospital, a convalescent hospital of 500 beds at Harefield, England where Australian casualties of the Somme were convalesced before being transported home. Her final posting before returning to Australia in October 1918 was at Cobham Hall, converted by the Darnley family into an Officers' Hospital for the duration of the war (just like on Downton Abbey).


Not only were service men very obviously physically wounded, but they were psychologically wounded as well, and needed compassionate care. In many cases, the nurses acted as surrogate mothers for the wounded soldiers.  Men often mentioned the kindness and outstanding work of nurses in their letters home. In a hospital in England, Private John Hardie wrote to his mother:
I would never have got across here if it hadn't been for one of the nurses in our ward, who was an Australian. She used to do her best to get all the Aussies across. There seems to be a great difference between our nurses and the British nurses. Of course they are all very kind, but I would rather be in an Australian hospital at any time.

Before the First World War, Australian military nurses had been seen mostly as glorified first aid workers. Senior Officers were more inclined to have trained male soldiers in preference to female nurses. Major General Howse (Director of Medical Services) has been quoted as saying that “the female nurse (as a substitute for the fully trained male nursing orderly) did little toward the actual saving of life in war... although she might promote a more rapid and complete recovery”. By the war's end, it was clear that the nurses contribution had been not only competent, but crucial to the war effort.  Nevertheless, the governments of Australia and New Zealand (just as the government of the United States) did not recognize the women as military veterans, denying them much-needed healthcare and financial benefits available to returning soldiers.

During World War I: 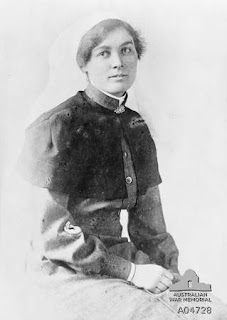 Sister Pearl Corkhill was one of the few Australian Nursing sisters to receive the Military Medal. She had been transferred to No. 38 Casualty Clearing Station, which twice suffered heavy German air raids during the week of 27 July. One bomb wrecked the sterilising room and others fell within the camp. Corkhill was on night duty at the time.

They truly were Front-line Angels.