A little journey from military fashion to more bicycles. 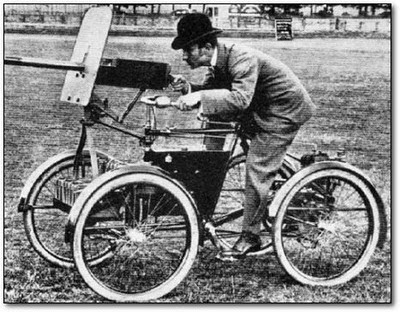 Here is unusual attire for the army, bowler hat and lounge suit!  The photo is actually of inventor F.R. Simms demonstrating his Simms Motor Scout Armoured Quadricycle in 1899.  He constructed the vehicle by mounting a Maxim machine gun on the front wheels bar of a French De Dion-Bouton Quadracycle, and adding an iron shield in front of the vehicle for the driver/gunner's protection.

A quadcycle is basically a bicycle with four wheels, one at each corner, ridden by one or, more often, more people.  They were invented around the same time as two-wheeled bicycles , and the earliest recorded pedal-powered quadracycle was exhibited in 1853 at the Exhibition of the Industry of All Nations World's Fair held in New York City.

Side by side Quadracycles were more stable at low speeds than bicycles and in-line tandems and it was harder to fall off.   Early designs used foot levers, but in 1885 the Coventry Rotary Quadracycle was introduced which used conventional bicycle-style rotary pedals instead. It was developed from a similar tricycle design and featured tandem seating for two.
In 1888 The Rudge Quadracycle was designed, and it  is described as the first modern practical four-wheeler. It had much lighter construction than earlier models, seated three riders in tandem and was steered by levers from the front seat.
Quadracycles were popular with fire and postal services.

there is a beautiful example of a fireman's quadracycle at he Brisbane Museum, which actually seats four, and has an attached trailer for the hose. 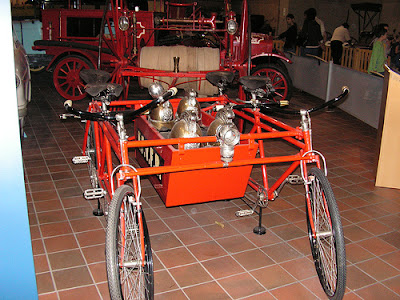 The Quadracycle of course quickly morphed into a horseless carriage, such as this one.

Here's a close up of the engine. Isn't it beautiful?!
And the Quadracycle in all it's glory.
I can't imagine how expensive one would be to buy now, but here is a replica someone in Indiana made. it sold for a mere $5,000!