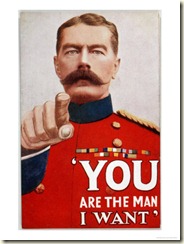 Today is Remembrance Day (also known as Poppy Day,Armistice Day, or memorial day), observed in Australia and other Commonwealth countries since the end of World War I to remember the members of their armed forces who have died in the line of duty. It is observed on 11 November to recall the end of hostilities of World War I on that date in 1918 - "at the 11th hour of the 11th day of the 11th month."

The "Ode of Remembrance" is an ode taken from Laurence Binyon's poem "For the Fallen", which was first published in The Times in September 1914.

They went with songs to the battle, they were young.
Straight of limb, true of eyes, steady and aglow.
They were staunch to the end against odds uncounted,
They fell with their faces to the foe.

They shall grow not old, as we that are left grow old:
Age shall not weary them, nor the years condemn.
At the going down of the sun and in the morning,
We will remember them.

My grandfather, Marcus Clark, was a young man when he went to war in 1914. He lied about his age – he was only 15.  Thankfully he came back, and proceeded to marry, twice as he outlived his first wife, and become a father to seven boys and a daughter.  My father is the youngest son. 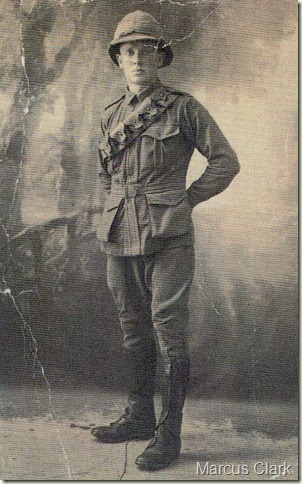 I always think of him on this day, although we never met.

The poppy is now the symbol of remembrance for our war dead, the flower that grew wild on the site of one of the worst battles in the first world war  - the Second Battle of Ypres.   By all accounts it was a hellish battle, worse than that at Gallipoli, with men fighting in  trenches and deafened by mortar shells . 6,000 men died within the first ten minutes of the battle due to the chlorine gas launched by the Germans, and another 4,000 men died during the 17 days of the battle .  The Allies (Belgiums, French, British, Australians and Canadians) eventually won the battle, but at a loss of 75% of their men - 10,000 Allies dead.

LTC John McCrae, a veteran of the war in South Africa, was serving as a doctor for the Canadian Army and said of the 17 days he spent in Ypres Salient, “I wish I could embody on paper some of the varied sensations of that seventeen days… Seventeen days of Hades! “

So he did.  In the back of an ambulance, from where could see wild poppies growing out of a ditch, he scribbled out the poem, “In Flanders Fields.” 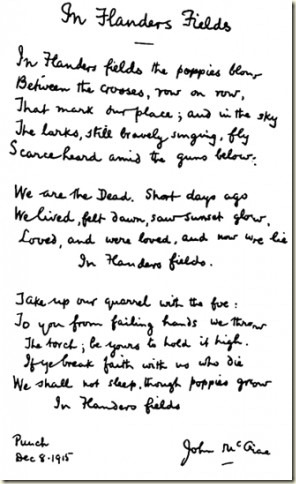 The poem was published on December 8, 1915, and with the poppy has become an icon of remembering the war dead world-wide.

In Flanders Fields the poppies blow
Between the crosses row on row,
That mark our place; and in the sky
The larks, still bravely singing, fly
Scarce heard amid the guns below.

We are the Dead. Short days ago
We lived, felt dawn, saw sunset glow,
Loved and were loved, and now we lie
In Flanders fields.

Take up our quarrel with the foe:
To you from failing hands we throw
The torch; be yours to hold it high.
If ye break faith with us who die
We shall not sleep, though poppies grow
In Flanders fields. 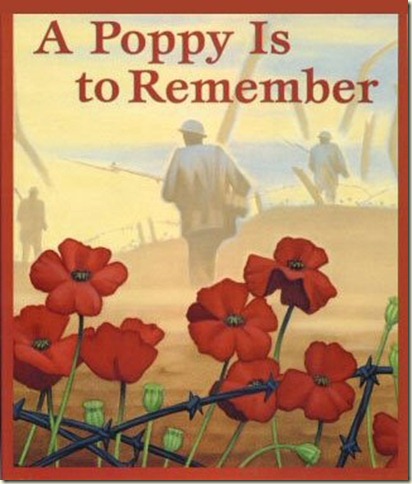 Have a safe remembrance day. If you can, take some time today to remember what this day is about, and think back to the men and women who have died while serving our country.   Buy a poppy and wear it and tell your kids about the wild poppies that grew in the trenches so long ago.