The death of Queen Victoria on 22 January 1901 and the succession of her son Edward (technically Albert Edward Wettin, but Edward here for less confusion)  marked the end of the Victorian era.  Just weeks earlier, on 1 January, as the world celebrated the beginning of the 20th century, the British colonies of New South Wales, Queensland, South Australia, Tasmania, Victoria and Western Australia joined together as the Commonwealth of Australia, with Edmund Barton the first Prime Minister. 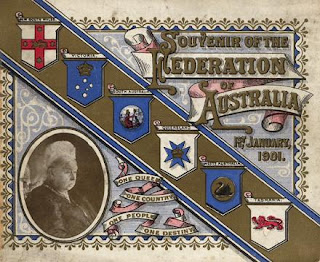 While Victoria had shunned society and dressed in mourning garb for forty years after the death of her husband in 1861, Edward was sociable and a great traveller.  As Victoria withdrew almost completely from public life, Edward was allowed to represent her at state occasions, although given almost no chance to participate in affairs of state. He became a leader of London society, spending his time eating, drinking, gambling, shooting, watching racing and sailing. He was actually quite spiffy too!

Edward had been subjected to a strict regime of education and rules from an early age, as his parents were keen to ensure he was prepared to rule. He attended both Oxford and Cambridge and briefly joined the army. He spoke French, German, Spanish and Italian and toured the world on behalf of the royal family, including Italy, Spain, Canada, India, Egypt, Denmark, France, Germany, Belgium and Russia.  He had even travelled to America in 1860, the first of the Royal family to do so, and on his return had a liaison with an Irish actress that caused considerable scandal. His father visited Edward to reprimand him, and died two weeks later.  Victoria held her son partly responsible for the death of his father.
Having mistresses was at the time not uncommon amongst the aristocracy, but his mother despaired of him and kept him away from taking an active part in politics. She once publicly said of him:
‘I never can, or shall, look at him without a shudder’

Edward continued life as a bit of a playboy, despite his marriage to Alexandra ,eldest daughter of King Kristian IX of Denmark, in 1863, and his six children.


Although he did not propose to Alexandra until September of 1862, after he'd ended his relationship with his mistress Nellie Clifden, after his marriage he had a succession of mistresses   including Lille Langtry (actress), Lady Churchill (mother of Winston Churchill), Sarah Bernhardt (actress) and Alice Keppel (great-grandmother of Camilla, wife of Charles the current Prince of Wales, and his last and longest serving mistress),  Lady Brooke, Princess de Mouchy and Princess de Sagan.

Never the less Edward was well received abroad.  In 1875 he toured India as heir-apparent. On his return he complained to his mother about British treatment of native Indians -
‘Because a man has a black face and a different religion from our own, there is no reason why he should be treated as a brute.’


Edward was proclaimed Emperor of India on January 1, 1903, and a Delhi Durbar (or big party lasting two weeks) organised by Lord Curzon was held to commemorate the occasion. Edward did not attend, but sent his brother,  the Duke of Connaught.

Although maybe not a racist, the king was a little sexist.  He was totally opposed to the campaign by the National Union of Suffrage Societies and  the Women's Social and Political Union to achieve the vote for women, however, and politically he favoured the Conservatives.
He did some good, however, and made several royal visits to help prepare the way for international treaties .  Known as the 'Uncle of Europe', as he was related to most European royalty, he was able to assist in foreign policy negotiations. He was the first British monarch to visit Russia, in 1902, and his addresses during a state visit to Paris helped pave the way for the Anglo-French Entente Cordiale of 1904. He took a particular interest in military matters and opposed attempts to reduce public spending on the armed forces.  He was also a strong advocate of the Dreadnought battle ship building campaign as tension between the United Kingdom and Germany increased from about 1906, the same year the liberals were brought to power in the general election.

Edward  was influenced by the art and fashions of everywhere he went, and  set the pace for men's fashions in this period, despite being quite portly. He had a great appetite, eating five large meals a day often consisting of ten or more courses. By the time he was king he had a waist of forty-eight inches, about twice that of the average corset wearing lady. Edward also smoked twelve large cigars and twenty cigarettes a day. If you have time, have a look at 'The Supersizers eat Edwardian' on youtube, below, in which they experience Edward's diet as well as that of the average Edwardian.


The King  also influenced female fashions as he particularly favoured the shape of the 'mature woman'. I'll look at fashion through the decade in future posts. He also grew a lovely moustaches, something which I am particularly interested in at present!

Edward had only a short reign.  He did not become King until he was 59, and died nine years later of pneumonia.  For this reason the Edwardian Era is not usually isolated to the period of his reign (1901-1910), but encompasses the mid 1890s to the outbreak of World War 1 in 1914, with the Titanic era seen as part of this from about 1912-1914.

Prince Charles seems to have had a similar life to Edward in some ways, and Camilla's life has been likened to that of her great-grandmother, as a great mistress of her age.  What do you think?