I have a few new year’s resolutions, do you?
Like every year, I aim to lose weight, but unlike every year I want to do this by simply getting healthier – drinking less, exercising more, rather than giving up everything I love.
This would have been easier one hundred years ago in the United States, as over half of the population  were living under some sort of prohibition. At the end of 1913, five thousand supporters of prohibition paraded from the White House to the Capitol calling for national prohibition by 1920. America went from a culture where everyone drank, including children, to one where no one was legally allowed to – and we all know how well that went.  It makes me wonder if they are headed the same way with gun control laws…..

Life one hundred years ago fascinates me – and it is my other new years resolution.  I want to look at 1913 in detail and get an idea of what people wanted and what they went through, as well as the fashions, inventions, movies and any interesting facts.  1913 sat between the world shattering events of the sinking of the Titanic in 1912, and the start of the great War in 1914.  It is sometime classed in the Edwardian Era, although Kind Edward died in 1910, and sometimes as part of the Titanic era.  1913 also falls in the Progressive Era of  history (basically 1890 to 1920), a period of social and political reform in the US and around the world.  It must have been a fascinating, and perhaps frightening, time to be alive.
My aim on this blog will be to look at events of each day 100 years ago, to watch or find out about a movie each week, to look at the fashions and their influences, find and share vintage photos and ads, read books and magazines of the time, and delve more deeply into events if I can.  I am still researching steampunk as well, and hope by the middle of the year to be ready to put together a steampunk outfit based on my 1913 fashion research.

Please share if you have anything to ad or any special requests.

Meanwhile, here’s a quick look at New Years Eve 1912 style. If you were dining out, the scene may have looked like this:


And maybe you would have eaten this: 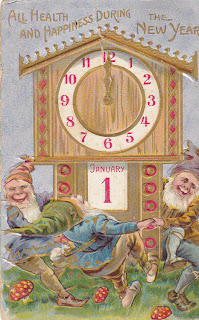