My search for images for tumblr has steered me towards something I had never heard of before - exaggeration postcards. And I am in love!  Long before computers and photoshop, many photographers were experimenting with altered images.

The main themes were usually fish, fruit or vegetables but almost any subject was used. Many were produced to advertise a particular state or area with captions such as "that's the way we grow them in Maine" or "bigger and better in Texas." 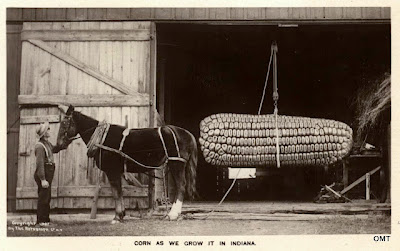 William  Martin of Ottawa, Kansas, was considered one of the best at producing exaggerated or "tall tale" postcards. His work featured huge ears of corn and peaches and  giant rabbits.


Martin's photography studio began experimenting with trick photography around 1908. He was so successful that he established the Martin Post Card Company in 1909 and reportedly produced seven million cards the next year.

There were several techniques used to produce the images. One way was to use a photo-montage, another was to use a mixture of artistry and photography. A photographer took two black-and-white pictures: a wide shot and a close-up. The enlarged image would be cut, placed, and glued over the wide shot to create the exaggeration. Headlines such as "Shipping a Few of Our Peaches" and "Harvesting a profitable crop of onions in Kansas" helped further the flight of fancy. I love this one by Martin  too -' the modern farmer.' 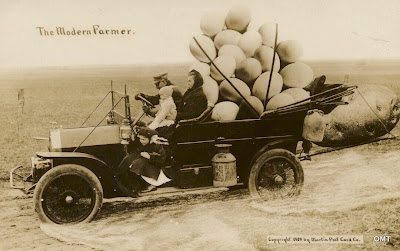 Martin was the king, but there were other photographers experimenting with the genre as well. iIn Washington state there was a national apple festival each year, and this postcard is typical of the kind produced, by H M Brown.

They also grew cherries!This real photograph postcard shows a charming young boy, with a great hair style, carrying a stem of large cherries over his shoulder. The  image was created by J. H. White in 1910.  Isn’t it lovely?


Edward H. Mitchell's scenes, produced mostly circa 1909-1910, primarily involve train cars bearing huge, colourful produce. Unlike many postcard creators who used four-colour palettes, Mitchell worked with up to six colours. He made his work available to larger audiences by producing postcards with blanks which sellers could fill in with their locations. 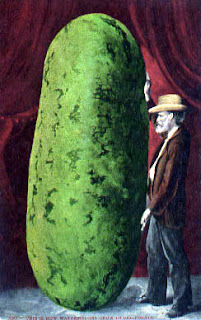 In Alberta Lea, a series manipulated scenes were custom printed for sales in various communities in the region by A.S. Johnson Jr. from Waupun, Wis. (near Fond Du Lac). The copyright dates on the cards range from 1910 to 1913.

J. Herman's few cards were mostly published by the Midland (New York) Publishing Company around 1912-1913, and were mostly images of produce on railroad cars or giant fish being caught.

Alfred Stanley Johnson was active in Waupun, Wisconsin from 1909-1935, and produced highly-realistic but humorous black and white images.

An artist known only as Leigh made a series of images in Florida in 1909, mainly of large fruit on horse and carts. 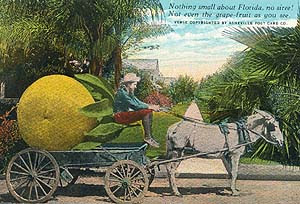 In the 1930s F.D. Conard, of Garden City, Kansas, was known for his postcards of giant grasshoppers, inspired by Kansas plague of the time.

Another postcard,not sure of the artist but it's a Kodak print from the 1940s.


Exaggeration postcards didn't seem to be big in Australia.   We just built big things and took photos of them instead, like the Big Pineapple near Nambour, Queensland, built in 1971.


We also have giant cows, bananas, mangoes, sheep, koalas, in fact you name it, we probably have it.

If you wish to look at more exaggeration postcards, or even buy a few, try out these sites, as well as ebay, etsy and ruby lane: