I want an Elephant for Christmas! 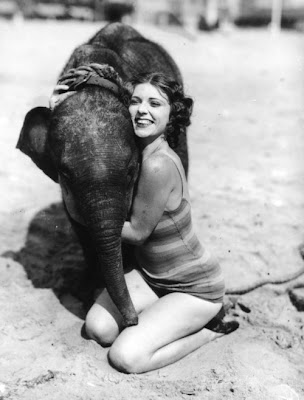 I love elephants. I mean, what’s not to love? They’re majestic, clever, vegetarian, musical (they can trumpet), brave and happy with their wrinkles. Elephants are a symbol of wisdom in Asian cultures and are famed for their memory and intelligence.  Aristotle once said the elephant was "the beast which passeth all others in wit and mind".  They are also a lot like us:

·         Elephants live in a strong family unit. The mothers are protective of their babies and spend all day teaching and loving them. They band together to shield their young if they feel danger is present, and will even chase away lions
·         Elephants are sensitive fellow animals where if a baby complains, the entire family will rumble and go over to touch and caress the little one. 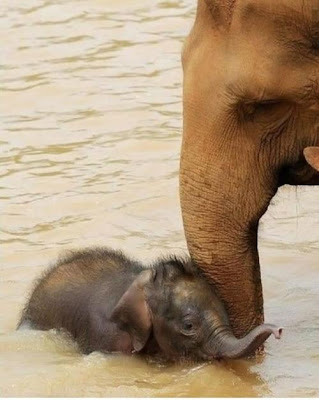 I have been looking at a LOT of vintage elephant photos – zoos and circuses mainly – for research, and you can see more of them on tumblr if you’re interested.

I don't really want a pet elephant.  Could you imagine?  In 2008 the British government received a petition calling for UK pet shops to be allowed to sell elephants to the public. Thankfully they ruled out the possibility stating that “the government does not think elephants would make good pets. They are very large animals that are not used to being kept as pets, and have welfare needs that would be impossible to meet in pet shops or people's homes.”

During WW2, a Belfast zoo keeper, Denise Austin, kept an elephant calf, called Shiela, at her home on the Whitewell Road when Belfast was being bombed in the blitz of 1941. The Ministry of Public Security had ordered keepers to euthanise some of the most dangerous animals if the city was attacked, so Ms Austin, one of the first female zoo keepers, adopted her.  Every evening the animal was walked the short distance from her enclosure to Ms Austin’s house in north Belfast, and every morning she was returned to the zoo. Her story is now being made into a book.

Apart from that act of kindness, I think Elephants belong with their families in the wild, not in cages or small yards, or in circuses, where not only do they not have family groups or the freedom to be elephants, they are often  abused, beaten and shocked to perform unnatural “tricks.  Zoos, with wide open spaces, not the cramped enclosures of the past, are better,  and allow everyone to be able to see elephants.  There are also elephant sanctuary’s, including some in the United States that have rescued circus elephants and those bought as pets (yes, there are some crazy people out. there). The sanctuary in Tennessee looks wonderful, with separate Asian and African areas for elephants, and they have a great website with an ‘elephant’ cam that is definitely worth checking out.

In some Asian countries, like Thailand, elephants work.  If they were allowed a childhood and then trained,  able to live like elephants when not working and then allowed to retire, like we do, and live out their lives as elephants, it could be acceptable.  Unfortunately though, not all working elephants have a good life, and even those in elephant tourist parks can have a hard life and suffer abuse. Fifty to 100 elephant calves are still being taken from the forests of Burma every year to supply the tourist camps in Thailand, and  it is estimated that for every calf smuggled across the country’s 1,200-mile border with Thailand, up to five adult female and adolescent elephants from the calf’s immediate family group are gunned down in cold blood. You can read more about it here, or donate to help here. If you are planning a trip to Asia, visit elephants at a sanctuary, rather than riding them at a tourist park, where they may have suffered terrible abuse during their capture or 'breaking in' process, as shown in this video.

The Melbourne Zoo has a wonderful Asian elephant trail, which opened in 2003, at a cost of $15 million, the result of preparations for building a regional captive elephant breeding program, one of the first in Australia.  The Asian elephant has lost up to 90 per cent of its population in the past 100 years and is facing extinction, with only an estimated 25,000 to 35,000 left in the wild.  Happily three pregnancies have been achieved since Melbourne Zoo established the Cooperative Conservation Breeding Program upon the arrival of three young elephant cows from Thailand in November 2006, and they aim to create an insurance population of this endangered species.  I have just booked tickets to Melbourne for late January, so I will be able to take the kids to see them!

At the rate elephants  are being killed by poachers in the wild, zoos and sanctuary's may be the only way elephants survive. 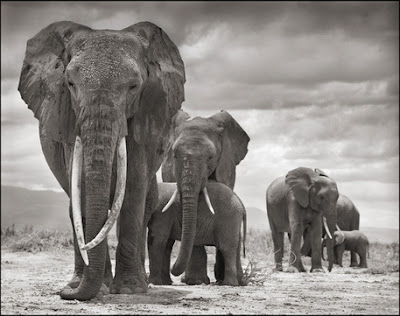 On October 27 2012, Nick Brandt took the photo above, of Qumquat and her family.
24 hours later, they were gunned down by poachers.

If you want to help fight the elephant slaughter, please check out http://www.biglifeafrica.org/
(where this photo is from) a non-profit organization dedicated to the conservation of Africa’s wildlife and ecosystems.

Or if you need a last minute Christmas gift for the person who has everything, you can adopt an elephant. Check out the World Wildlife Fund. I think I may yet get my elephant for Christmas! 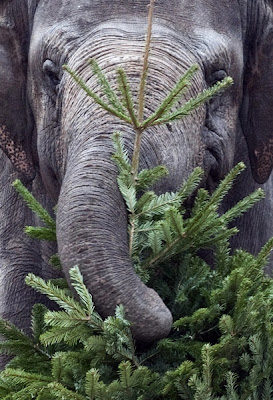