Last week I looked at the development of the telegraph.  The original Morse telegraph printed code on  punched tape, with the operator, by striking one of three operating plungers - one for the dot, one for the dash, and one for the space -  with small rubber tipped mallets, one in each hand.  The operator also had to move the tape at the same time, which could be slow and tiresome, despite the fact that a trained Morse operator able to transmit 40 to 50 words per minute.
"The telegraph operator is brain work, requiring close and unremitting application", as one professor summed it up. "The mental effort involved in receiving (morse code) from a sounder was exactly similar to that in which a shorthand writer was engaged when reporting a speaker verbatim, and it took as long to train a good telegraph operator as a good reporter."

Telegraphists were an elite group - usually well educated, in city and suburban post and telegraph offices, they occupied a position between the working classes of telegraph messenger, letter carrier and postal sorter, and the managerial classes of supervisor, postmaster and superintendent.  Usually men, especially in Australia, they showed their middle class alliance by dressing fashionably - gloves and brightly coloured waistcoats, even in the desert, such as in  Eucla in West Australia, where the men wore flannel trousers, white shirts, ties and the ornate waistcoats.


In 1855 American David Hughes designed a printing telegraph system, the first to print text onto paper.  It was in production until 1914.  It was a rival to the Baudot  system developed in the 1870s, with the piano key layout required minimal training for the operators. Messages were printed on paper tape by the type-wheel arrangement visible at the back. Power was supplied by a weight and pulleys underneath.
Meanwhile, in New Zealand, Donald Murray had a vision of a teletypewriter, apparently from looking at typewriters and cable-copy machines while working as a journalist with The New Zealand Herald in Auckland in 1887 - he thought that anyone could learn to type on a standard 'QWERTY' keyboard. In 1898, when his ideas had taken a practical form, he went to New York where he joined the staff of the Postal Cable Company.  By May 1899, Murray had worked out the mechanism for his design which set type by telegraph by connecting the keyboard to telegraph machinery, and applied for a US patent.  For his first US patent, Murray wrote, “My invention relates to improvements in printing telegraph apparatus, and is designed, by means of a transmitting device provided with an ordinary keyboard, such as the Remington, to operate at a distant station any ordinary typewriter …” 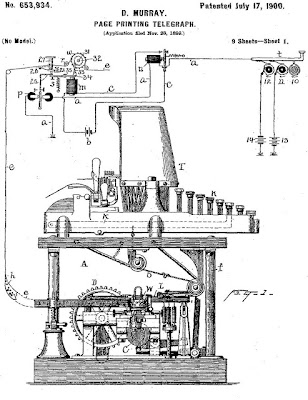 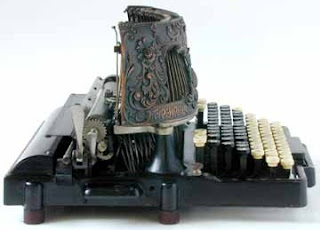 In late 1899 Murray sought a financial backer for his venture in New York. Unfortunately during transit to the US from Australia his system arrived at the New York office of Scientific American smashed into little pieces.  Murray was able to patch it up and successfully demonstrate it. Scientific American wrote that the Murray system was “without rival” for long telegraph lines, underground cables and press messages. They also  described the printer “as a sort cross between a sewing machine and a barrel organ”, as it was worked by the operator turning a handle.  It was dubbed by popular media as “Murray’s coffee mill” and the “Australian sausage machine”.

Murray then took his 'Murray Automatic Printing Telegraphy System'  to London.  For a short time he worked at the UK General Post Office, while further developing his  system of printing telegraphy.  He left the GPO in 1909 having established a Telegraph Engineering factory in London and he sold a number of his installations to Germany, Austria, Russia and Sweden, Brazil, Australia and New Zealand.   For more information on Donald Murray go to the excellent blog, Oz Typewriter. 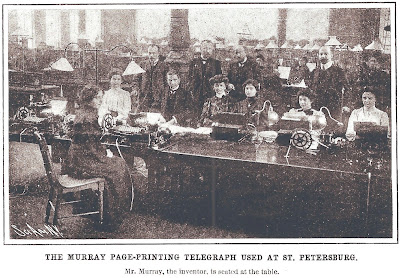 In 1900, Canadian, Fredrick Creed also experimented with a faster way to send Morse code. His idea was for a typewriter style machine that would enable complete Morse code signals to be punched in the tape simply by operating the corresponding character keys.  Creed went to Scotland, and in a garden shed in Glasgow he transformed an old typewriter bought for fifteen shillings into his prototype keyboard perforator, operated by compressed air and controlled by a keyboard.  In 1902 the General Post office placed an order for 12 machines.

With the aid of a small team of mechanics Mr Creed produced two further machines. These were a receiving perforator (reperforator), which recorded the incoming signals in a perforated tape identical with that used at the other end of the line for transmission; and a printer which accepted the received message tape and decoded it into plain language printed characters on ordinary paper tape. Thus was born the "Creed High Speed Automatic Printing Telegraphy System", later known in offices all over the world under the name of Telex.

Creed joined with Harald Bille, a well known Danish telegraph engineer, in 1912 and the company of Creed, Bille was formed, increasing the workforce grew to 72.  That same year the Daily Mail became the first newspaper in the world to adopt the Creed System, and shortly the entire contents of the newspaper were being transmitted daily from London to Manchester for simultaneous publication.  Other newspapers shortly followed this lead and export business began to develop with orders from telegraph administrations and companies in Denmark, India, Australia, South Africa and Sweden.

Like most technology at that time, many people were working on the same idea from different angles, so it;s' difficult to appropriate credit to each of the inventors concerned, but Murray and Creed were part of an amazing group of engineers  and inventors who revolutionised telegraphy.   Teleprinter,tele-typewriters or telex's opened telegraphy to broader use.  By adapting it to the typewriter, which was then becoming a standard business machine, it could be operated by less-skilled personnel, and basically anyone could operate one - even blind people and women!

In 1913, British telegraph traffic peaked in volume with 82 million telegrams transmitted, but in the relatively short interval of the next 21 years, patronage declined and had dropped to 35 million telegrams per annum.  Also in 1913 America's Western Union developed multiplexing, which it made possible to transmit eight messages simultaneously over a single wire (four in each direction).  In the UK Creed was experimenting with high speed automatic telegraphy by wireless. Messages were successfully transmitted via an aerial on the roof of the company  to  Creed’s home about three miles away. The experiments had to be discontinued on the outbreak of the First World War, when the aerial was dismantled on Government order.

Automatic transmission would be introduced in 1914, and would allow around 20 messages to be transmitted at once, however experiments in wireless technology were suspended in the UK until after the war. WWI did allow more Australian women to assume telegraph positions previously held by men, although women had been doing the job quite successfully for some time by then.  There were women telegraph operators during the American Civil war, which you can read more about here.