I've been posting about washing and laundry recently. Here is a little 10 minute snippet from The 1900's House, which shows the ladies of the house on washday.  It gives a  good feel of what  washday was like before washing machines were invented. At the end of the video the girls make their own hand cream for their ruined hands, and then start on the ironing.

After centuries of home made preparations, hand and body creams began to be commercially manufactured in the late 1800's. Early ingredients came from plants and animals, such as olive oil, bees wax, whale oil and lanolin from sheep's wool, and from the 1860's formulas took advantage of mineral oil (baby oil) and petroleum jelly (Vaseline) created in the production of gasoline.  The basic assumption was that fats and oils helped make the skin soft and supple, although in truth mineral products do not absorb into the skin, although they  can keep moisture in the skin by making a barrier. 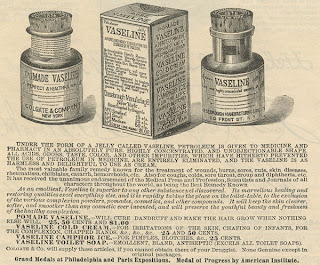 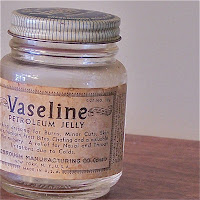 Old Vaseline Ad, c. 1890s source and glass jar, c. 1910 source
Glycerol, or glycerine, was added as a lubricant and humectant, to enable to the creams to be absorbed into the skin.  Glycerol is also a component of glycerin soap, like the famous Pears soap, first produced and sold in  London in 1789 by Andrew Pears, which was advertised as a complexion soap and for babies, as well as for "soft, white hands" as it's moisturising properties help prevent excessive dryness compared to some other soaps. 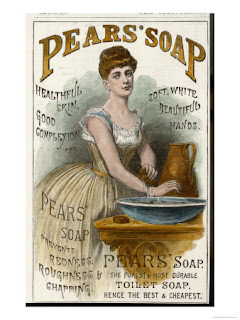 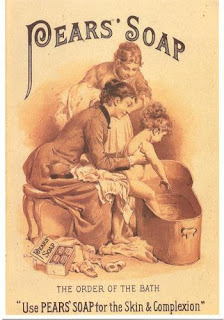 Pears is still available today, although I fear it is much an inferior product.
Cold cream was also commercially manufactured by the late 1800s, although it had been invented centuries earlier by a physician named Galen, in second century Greece. Galen's cold cream was based on beeswax and water, with olive oil and rose petals for softness and scent, respectively. From the 1780's whale oil was used instead of olive oil, and later mineral oil and then from t he 1970s, thankfully, jojoba oil.  Borax was also added early on to give the cream it's white appearance.

Cold cream, and Vanishing cream, another popular product in the early 1900s were both used a a healing cream great for chapped hands, before they became popular complexion creams.  American scientist Theron T. Pond (1800–1852) invented a medicinal cream in 1846 which contained healing witch hazel, which he named "Golden Treasure." In 1846, the "T.T. Pond Company" was formed, and when Pond died in 1852, the company named his cream "Pond's Extract."

From 1886  the company advertised nationally under the name of Pond's Healing . By 1915 Ponds moved from healing to beauty,  and so "Pond's Vanishing Cream" and "Pond's Cold Cream" were created.  Both products are still available today. 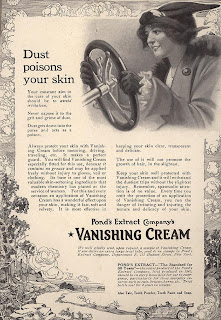 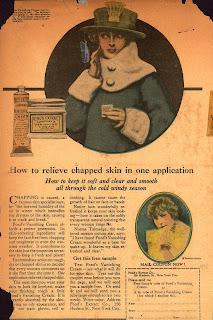 Vanishing Cream ad, 1912 source and How to relieve chapped skin in one application, 1916, source

Vanishing creams are called that because they seem to vanish into the skin (not the other way around).  Another early vanishing cream was introduced by Burroughs Wellcombe under the name Hazeline Snow. Also made with witch hazel, it was first marketed in the 1890s as a medicinal cream,and was included in first-aid cabinets that the company produced for sale around the world. Hazeline is also still available today. 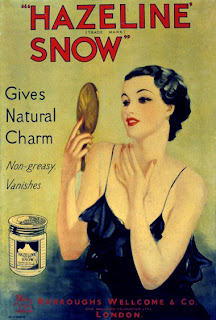 In 1900 German Dr Leifschuz patented a smooth ointment he called Eucerin "the beautiful wax", and sold from 1903 under the name Paul Beiersdorf und Co.  Dermatologist Professor Unna wrote in 1907 that it was a cream "easily prescribed by the doctor", "sold by the pharmacist" and "creates a good feeling for the patient due to its smoothness and cooling effect." It was available in the US from the  1920s under the name Eucerin Original, and is still available today.

My favourite hand cream is a balm I buy here locally, made with beeswax and olive oil and essentials oils of lavender and rosemary.  I call it Mum's special cream, and the kids ask for it as soon as they have a scratch, a mozzie bite or even a headache.  One day soon I will make my own - I found a nice easy recipe here.

Have you made your own cream? Any good recipes or pointers?