Continuing with my zebra theme, this week a look at zebra's in design, and in particular on walls.

The Town House Hotel in Los Angeles was built in 1929 and was designed  by Norman W. Alpaugh.  It was once among the most luxurious hotels in Southern California.  It's "Zebra Room", featuring zebra murals and zebra patterned crockery, opened 1937 or 38.

African adventurers such as Martin and Osa Johnson had helped to make safari themes popular in the 1930s.

A couple of years later, in New York, new arrival Gino Circiello opened his restaurant, Gino's.  He was helped with his business by Franco Scalamandre, who was known to help Italian Americans get their financial footing.  Circiello chose a zebra design wallpaper for his restaurant walls,  a creation of Scalamandre's wife, Flora.  "I chose it because I love to hunt," Circiello says, "and it is something that people will remember."

It certainly is memorable! 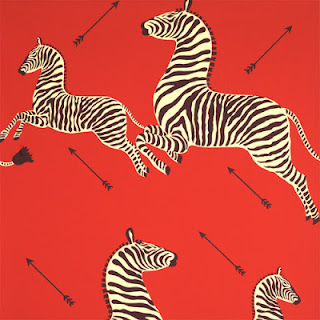 Scalamandre has just reissued their classic Zebra wallpaper in new vibrant colours,although I think I like the black and white version best.

If you don't want to wall paper your home, there is always the Scalamandre Zebra Tote.
Or the silk scarf. 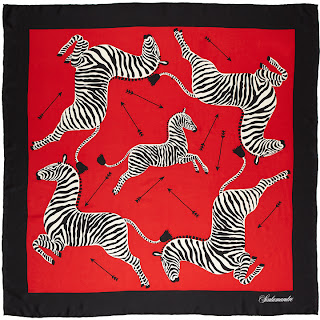 Or even home wares - Scalamandre teamed up with Lenox for their new collection, which unfortunately is available exclusively at Bloomingdale’s. 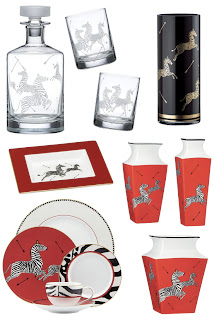 I love the dinner setting.  I could have my own zebra room.....