My new life as a mid-century house wife

As I get closer to my 400th post, I have been doing some re-evaluating and decision making.  This blogging experience has taken me from pure research to personal moments, looking at WWII and 1942, new technology and 1913, and now back to my favorite era - mid-century.  So, now what do I want, and which direction will my blog go in?  This could be a long post, but it's more for my own planning purposes than anything, so feel free to just look at the pictures.  There will be more news at the end though.

In my dreams, my home is immaculate.   The children are happy and never argue, the pets don't smell  and my husband has a drawer full of clean socks. 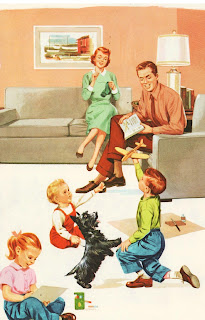 The reality is a little different.  Despite doing a load of laundry a day the socks disappear (dirty ones are usually under the sofa), the kids argue about little things like pencil sharpeners, and the dogs usually find something horrid to roll in.

My husband is a modern man and does loads around the house - he even cooks, irons if he has to,  and un-stacks the dishwasher.  But he works full time, and I work part-time so I can pick the kids up after school, Although that in itself feels like a job some days, I really feel it’s my job to keep things in order. I do the cleaning and laundry, and cook during the week.  I help the kids with homework, feed and walk the dogs, take care of dentist and doctor appointments and even trim the kids hair.  Sometimes, when I am motivated, I paint walls, sew or garden.

I must say I think it's gotten easier as the kids have gotten older, but then I have put an effort into teaching them how to do things rather than doing everything for them.  Even the eight yearolds can turn on the washing  machine and hang their t-shirts on the rack, and my teenagers can cook a mean bolognaise.

It is often the case that women of the 50s are seen as downtrodden doormats, looking after their husband and off-spring's every whims.  Two women that I personally knew who were housewives in the fifties were anything but.  My paternal grandmother was a widow, mother of three and stepmother of five by 1947, and ran a dairy and general store.

My maternal grandmother had survived the war  in occupied Holland with a POW husband and two children, and emigrated to Australia with four children in 1956, following her husband, who had gone to seek work and make a home for them.

In the 1950s most married women did not work - they were not allowed to by many companies.  It seems a bit crazy after WWII when all women that were able to were working, but by the 50s many men needed jobs, and as the 'bread winners,' they got priority.  My grandmother's both worked because they had to - one in her own store and the other in factories.  I think the tomato sauce factory was the worse - Grandma would never eat the stuff after that experience!

These women  were strong, fierce and independent.  And organised.  They amazed me, and still do.  Yes they did the washing and cleaning and cooking, and looked after their families.  But they also got the kids to help out - cleaning, helping with the washing, keeping the vegie garden, babysitting and even milking the cows.
They really are my inspiration, even through both died ten years ago.  They are maybe why I so obsessed with the past!
Anyway, in memory of them, I have decided to be more like a 1950s housewife. I don't aim to be a domestic goddess, nor will I be too authentic.  Boiling laundry before putting it through a mangle holds no appeal!  I will do the ironing though, instead of letting my husband iron a shirt each morning.  And I will cook and clean without complaining.   I may even greet him at the door with a martini in the evenings. Well.....

And I'll even buy the groceries - something I really don't like doing. In 1950s Australia fridges were rare and housewives had to visit their local shops most days to buy fresh food.  I think I will actually prefer this to the big supermarket trip once a week.  Maybe I could walk or ride my bike too. Maybe.

I want to plan my weekly meals.  To do this I will enlist the help of my 1950s cookbooks and magazines.  In fact I will try and arrange my reading and movie watching according to my old magazines - the Australian Women's Weekly and the Australian Home Journal, with a couple of English or American magazines thrown in here and there. They can help me plan my wardrobe, sew my own clothes, and 'improve' myself too.

So where to start?

The kitchen - meal planning, stocking the pantry, baking and making all meals from scratch.

My wardrobe - re-evaluating, planning, re-vamping and sewing.  Not just saying I will sew.  Like a 50s woman I sewed my own wedding dress, so surely I can sew a frock or two.

The home - keeping it clean - actually cleaning windows regularly. Finish the painting and slip covers I've planned.  I will even set up a sewing room.

The bedroom - yes really - I will try and keep my man a little happy, as my vintage magazines suggest.  I will also iron his shirts, try not to complain about football viewing, and try not to crticize. This one will be hard, but I find the happier he is, the better his mood and the smoother the house runs.  I know it's old fashioned, but if it works, why not.  I do try now and then, and we have been married for nearly 25 years so I must be dong something right!

The laundry - I will organize it and pair all the odd socks.  With five kids and husband, that's a lot of socks.

My self - I will try an be Mrs Miniver nice - smiling and helpful, running the house with easy efficiency and no complaining or criticizing.  I do reserve the right to yell at the kids occasionally though.  I will try and follow a 1950s diet, exercise more and drink less.  I will try and 'improve' myself with some good books, a beauty routine and more sleep.

Less technology - sounds crazy - but my lap top crashed last week (it fell on the floor), and I have only been able to blog/internet search during my lunch time at work.  After three days of withdrawals, I realized that I actually got so much more done around the house. And I was nicer to the kids.  I also read more, including reading reference books for my research, and even had time for the odd day dream.  We have also started playing board games after dinner and one night the kids took turns reading aloud a funny story.  Now I am planning a movie night, with a 50s family friendly movie, complete with popcorn.

So from now on my blog posts will feature more of the things outlined above, and less history. I hope that's ok with you guys - if not, goodbye and thanks for listening  I want this blog to be something my daughters, and sons, can refer to for tips and recipes as well, which is originally why I started blogging t in the first place.

I'll still be researching mid-century art, history, homes, decorating and design.  This will all feature on my new website!!
It is a work in progress, but you can have a look at  it at Mid-Century Home Style.

And the other exciting news,  I'll be having a give away for my followers to celebrate my 400th post.  Which is the next one!!