Born Shirley Jane Temple in Santa Monica, California on 23 April 1928, Shirley Temple went into show business in 1932 at the age of four, after being discovered in a dance studio. She became the most beloved little girl in the world and was voted" the most outstanding personality of the year" at the age of six by the Academy of Motion Pictures.  She started out making 75 pounds a week, and by 1937 was earning 150,000 pounds a year - the seventh highest paid actor at the time. By 1939 16 of Shirley's movies  had grossed 2,500,000 pounds each.   Shirley was cute, but not too sugary, and so clever - she could dance, sing and had quick come back lines - costars like Lionel Barrymore thought her "divine" and "intelligent," and every little girl wanted to be just like her.  Clever marketing put her name to everything from dolls to hair-ribbons - you could eve buy Shirley Temple toothbrushes.


Australia loved her, and even sent her two live wallabies as gifts, and in 1936 the Australian Women's Weekly received thousand's of entries in the "why I love Shirley Temple" competition. The prize? A Shirley Temple doll of course!

On September 19, 1945, when Temple was 17 years old and freshly graduated from Westlake School for girls in Los Angeles, they were married before 500 guests in an Episcopal ceremony at Wiltshire Methodist Church. their daughter, Linda Susan, was born on January 30, 1948.


Agar became a professional actor and the couple made two films together: Fort Apache (1948, RKO) and Adventure in Baltimore (1949, RKO).  In the words of a family friend, "neither of those two kids knew what marriage was about", and after a troubled period Temple divorced Agar on December 5, 1949. She got custody of their daughter and her maiden name back.

A year later Shirley married Charles Alden Black, a WWII United States Navy intelligence officer and Silver Star recipient, and retired from show business.  Charley , apparently, had not seen a single Shirley Temple film, which delighted the star. The family moved to Washington, D.C. when Black was recalled to the Navy at the outbreak of the Korean War, and their son, Charles Alden Black, Jr., was born there on 28 April, 1952. 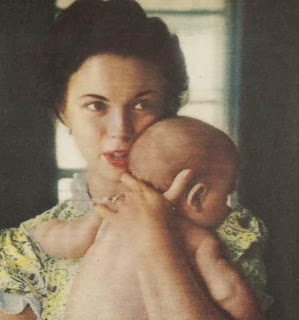 After the war and Black's discharge from the Navy, in 1953 the family returned to California. Black managed television station KABC-TV in Los Angeles, and Temple became a homemaker. Their daughter Lori was born on 9 April 9, 1954.  Black became director of business operations for the Stanford Research Institute and the family moved to Atherton, San Francisco.

In 1958, after turning down many previous offers, Shirley signed to appear in a series of 16 special one-hour programmes based on classic fairy tales. She starred in the first episode, "Beauty and the Beast", and narrated the subsequent episodes including "Hansel and Gretel". She took the job because it meant only one day a month in Hollywood, and "when I talked it over with Charley and the children they all said yes. they're just dying to see me on television."

In 1960 Temple became involved in politics, supporting Richard Nixon for the presidency.  More successfully she then supported conservative republicans, including Governor, and later President, Reagan. In 1965 she went on a good will visit to Russia, where she appeared on television and was mobbed by fans. In 1967 she ran unsucessfully for Congress, telling the press that "our country is in terrible trouble."

Her failure did not deter her, and she began writing speeches and did a nation wide tour for the party.  President Nixon asked her to join his party, and in 1969 he appointed her to the US delegation at the United nations, and later as deputy chairman of the US delegation to a Stockholm conference on the environment.


After a string of other environmental appointments, and recovery (and mastectomy) from breast cancer,  she was appointed by President Ford as first US Ambassador to Ghana in 1974, which she called "the best job I even had." Her fashion look seems to have been greatly inspired by her time in Africa.

On returning to the US in 1976 she was appointed the first woman Chief of Protocol at the White House - a job which she did not like. Temple stayed active on the board of several major corporations and in 1981 was appointed by president Ronald Reagan  to co-chair seminars teaching young diplomats and their spouses how to be ambassadors. (She had "married' Ronald Reagan in the 1948 film "That Hagan girl"). In 1982 she visited Australia for the first time.

Shirley always wanted to be ambassador again, and in 1989 until 1992 she was US ambassador to Czechoslovakia.  According to Temple-Black, her more than twenty-five years of social service have been just as enjoyable as her years in Hollywood.

Shirley and Charley were married for 54 years until his death on August 4, 2005. Shirley is still living in Northern California, and still writing.  You can see more photos, and buy her movies and dolls, at her official website. All (but one) of my photos are from various issues of the Australian Women's Weekly.

"If I had to do it all over again, I wouldn't change anything."

Update -  Wednesday, 12 February 2014-
Shirley Temple died Monday night at about 11 pm at her home near San Francisco, aged 85. She was surrounded by family members and caregivers, according to publicist Cheryl Kagan.