Jane Austen and a Brief History of the Regency Empire Style

I have just re-read Emma, by Jane Austen.  Now, as I am wont to do, I am obsessed with all things Emma and indeed Jane Austen. I've watched both 1996 versions of the movie, and the 2009 mini-series (forgive me if I sound a bit Austen-ish in my speech!), and I am trying to find a copy of the 1972 mini-series.

I have also been searching the the web and found, much to my delight, that there  there are thousands of Jane Austen fans out there, and even those who attend re-enactments and fairs, and dress in the period.  There is even a Jane Austen Fair here in Australia! It is held in Canberra, NSW each April, so I have just missed it - but that means I get 12 months to prepare for the next one!  I jokingly mentioned to my husband the other day and told him that the activities including dancing and a ball as well as concerts, a costumed promenade around the lake, theatre and archery, and he said it actually sounded like fun.  I couldn't believe it, as normally he is not too keen on my vintage obsessions, so we vowed then and there that we would attend. How exciting. Now to study the period and plan a wardrobe. For both of us....


The 2015 Jane Austen Festival will be celebrating the 200th Anniversary of The Battle of Waterloo, as well as Jane Austen’s Men, so I would like to make a wardrobe that could have been worn in 1815.  Napoleon of course was the instigator of the Empire Silhouette -  he admired the ancient Greco-Romans and their fighting style, and their draped, tubular, less-corsetted, high-waisted fashion became popular with a public wishing to differentiate themselves from the aristocracy with their powdered wigs, panierred skirts and extreme corsetry. Josephine did a lot to promote the style, as fashion was no longer dictated by the court at Versailles and the sometimes over-extravagant Marie Antoinette. Gentlemen also began to wear trousers, in the fashion of French peasants,  instead of the knee breeches and stockings that had been popular for centuries.

I find it interesting that even through Napoleon was an enemy of Britain, the Empire silhouette was taken up by the British, and her colonies, and most of Europe, except perhaps for Spain  - the British, often seen as straight laced and conservative, adopted a fashion that almost allowed the natural form of women to be shown, with only a few layers of fine muslin, cotton or silk fabric and the top of the breasts often actually visible! It is thought than 'Dandy' Beau Brummell introduced the male fashion of trousers to Britain, along with the cravat, and tailored linen jackets.  Linen jackets also became a trend in women's fashions - the shortened spencer to wear with high waisted dress - as did linen skirts.  Perhaps he was also partly responsible for the Empire dress craze for women, or maybe women were just eager to embrace practical fashion that actually allowed them some freedom of movement and routine. Or perhaps it was the British who started the trend and the fashion moved from Britain to France.

Even the Prussian aristocracy did not want to be aligned with the French royals - here is Louise of Mecklenburg-Strelitz, (1776-1810) the wife of king Friedrich Wilhelm III of Prussia, in 1798, before she was pursued across Europe by Napoleon. Her skin is so pale it'a little hard to see where the dress begins, but it is quite low cut with a little sheer fabric across the breasts and is obviously in the empire style with gathers under the bust. Is she wearing neck protections?!


It's as if women suddenly thought "let's just ditch the dress and wear our underwear!" In  the painting below you can see the young girl with her simple white chemise style dress, the older girl with her dress gathered under the bust, and her mothers similar but with an extra cross-over piece (probably for ease of breast-feeding). The father has his top-coat on so one would assume the women are not in their underwear.


As the style progressed the skirts began to flatten at the front and gather just from the bodice at the centre back, as in this example from about 1810. Note the very sheer patterned muslin over a plain chemise. 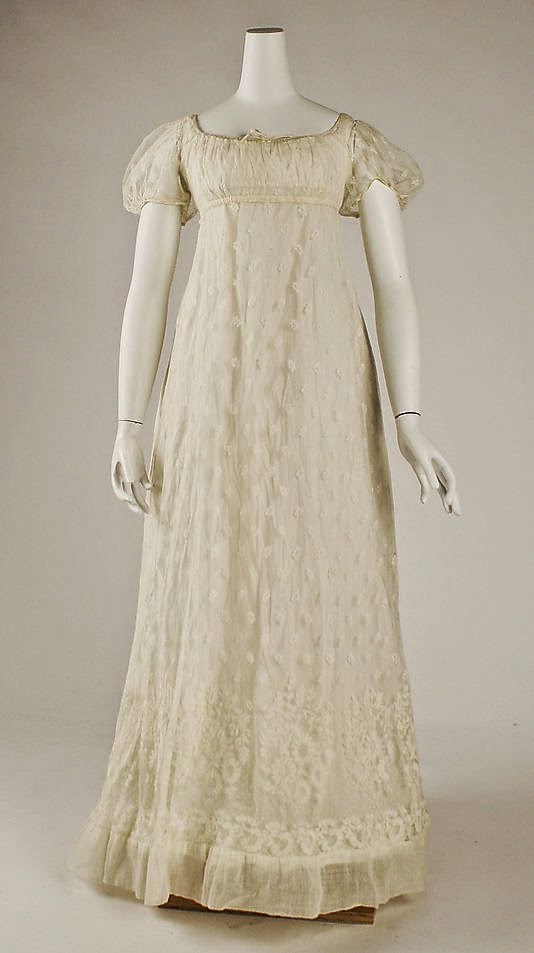 The Empire style did waiver a little in France, as it was said that many women were dying from cold because of lack of clothing.  However, when a newspaper report told of  Madam Hamelin, the first woman to run the Théâtre de Paris, adopting the style, it persisted.

Other fabrics were used - thicker cottons and silks in patterns, florals, checks and brocades - and shawls and spencers did protect the wearer from chills (Mr Woodhouse would be happy).  The patterns, and a slightly shorter ankle length, also prevented the dress from becoming dirty so quickly. 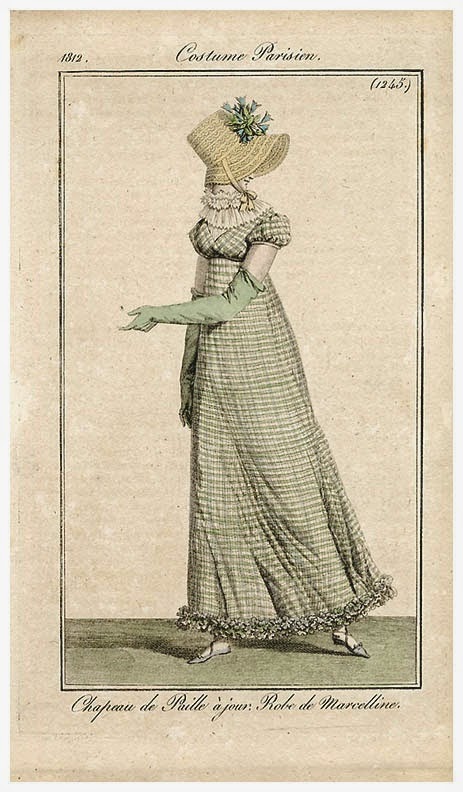 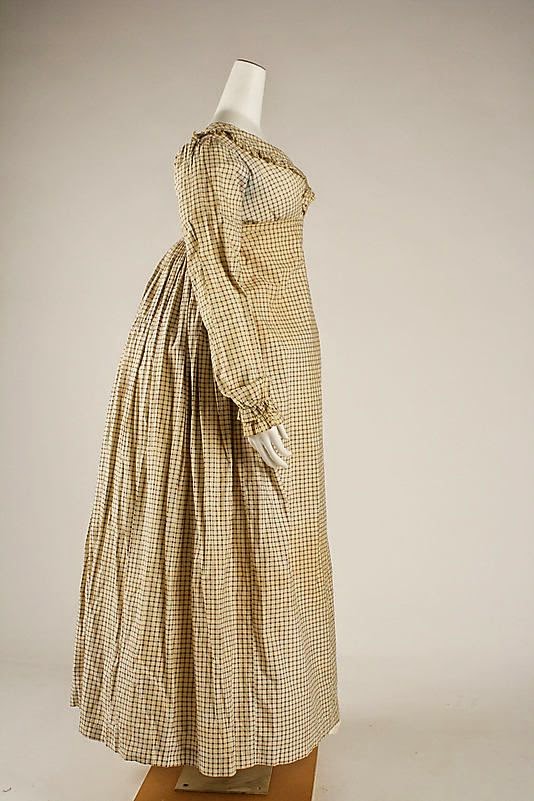 There are examples of dresses from the period in bright blues and yellows, and even red and tartan. (You can see my pintrest board for more examples).

I do love this period of fashion - it looks quite comfortable and easy to wear, and actually quite modern, especially  compared to what came twenty and even fifty years later. The style was sort of taken up again one hundred years later, in the 1910s, with the tea-dresses in the neo-classical style, although the breasts were not quite such a feature.  Maybe another 100 years on we are due for a resurgence? Not too far fetched an idea, as the maxi-dress is already popular!

Although it was a time when the distinction of styles among the classes was quite blurred, middle and upper-class women did distinguish between "morning dress" (worn at home in the afternoons as well as mornings) and evening attire — generally, both men and women changed clothes in preparation for the evening meal and possible entertainments to follow. There were also further gradations such as afternoon dress, walking or promenade dress, riding habits, travelling dress, dinner dress, etc.


According to "The English Lady's Costume", published in London in 1811, morning dresses were worn inside the house and were high-necked and long-sleeved, covering throat and wrists, generally plain and without decoration.  Evening gowns, on the other hand,  were often extravagantly trimmed and decorated with lace, ribbons, and netting. They were cut low and sported short sleeves, baring bosoms - not beyond the boundaries of decency, however, especially for those past the blush of girl-hood.

So it appears, that at the very least, I need to sew a morning dress, a carriage or promenade dress and an evening dress for my self, and have accessories such as gloves and a shawl, and at least a sun-hat.  I plan to find some patterns and make a first dress in calico or muslin and experiment. I will look at each style of dress in more detail as I go.

In the meantime, I have a few more (free) books for my reading list -

the rest of   "The English Lady's Costume" - which can be read online here; and