On 19 February 1942 mainland Australia came under attack for the first time when at  10.00am  Japanese forces mounted the first of two air raids on Darwin.   The attacks were planned and led by the commander responsible for the attack on Pearl Harbour ten weeks earlier, Vice Admiral Chuichi Nagumo  They  involved 54 land-based bombers and approximately 188 attack aircraft which were launched from four Japanese aircraft carriers in the Timor Sea, just north of Darwin.  The first attack lasted 40 minutes, followed by a second attack an hour later.  In that short time at least 243 people  were killed and between 300 and 400 were wounded.  Twenty military aircraft were destroyed, eight ships at anchor in the harbour were sunk, and most civil and military facilities in Darwin were destroyed.

The attacks caused chaos in Darwin, which despite being strategically important to the allies, was poorly defended.     The few troops who were there to defend the town were on the whole undertrained, due in part to ammunition shortages, and there was no warning  of the attacks, as there were no radars.

However, the  government was aware after Pearl Harbour on 7 December 1941 that Darwin was a potential target.  On 12 December the War Cabinet decided all women and children should be eva­cuated from the city, and this was given a greater priority after the fall of Singapore on 15 February 1942.  By 19 February  most people judged non-essential to the war effort had been evacuated by ship, boat or train, including at least 1100 of the 2000 white women and children in the town and surrounding area.  All Aboriginal women and about 20 per cent of Aboriginal men were moved out of the city.  Most of the remaining civilian population fled after the attack, as people feared a Japanese invasion and essential services such as water and electricity were non existent.

A group of Darwin evacuees on board the USS President Grant pose for a photograph, 1942  Source.

These attacks were the first of no fewer than 64 air attacks on Darwin between then and November 1943.  In all, the Japanese bombed northern Australia 97 times, including Broome, Wyndham, Derby, Katherine,  Townsville, Mossman and Port Hedland.

Corporal T E Harper of Sydney in a bomb crater in the a road after  the attack on Darwin.

The Australian government covered-up the bombing raids on Darwin believing any publicity would reduce moral (and scare people senseless),  In fact, even in the 1980s, when I was in high school, we were never taught about the bombings in Darwin or Broome in history.  Mind you there was a movie made in 1944 about part of the story – the part where the cows of Darwin and the northern territory were evacuated to Queensland, so the Japanese could not eat them if they did invade.  Seriously.  That movie was The Overlanders, featuring Australia’s own Chips Rafferty.  You can watch it here: 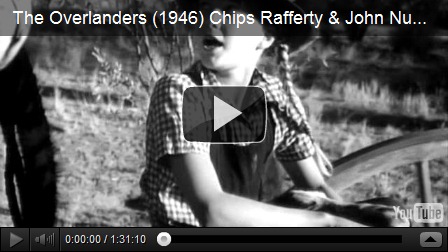 Cows evacuated after the bombing on Darwin

Some of this story, and the bombing of Darwin, was also portrayed recently in the Movie Australia, with Nicole Kidman and Hugh Jackman.   It was actually filmed in Bowen, about two hours north of where I live in Mackay, QLD. 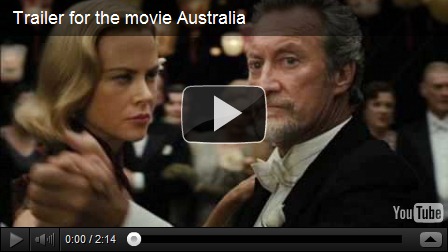 Perfect for a Sunday afternoon, I think!