Make do and mend–wartime sewing & war

A Saturday of working at the op-shop, listing on ebay and a bike ride – one day I will make time for sewing.  Until then, here’s a great little article form the Women’s Mirror, 1942: 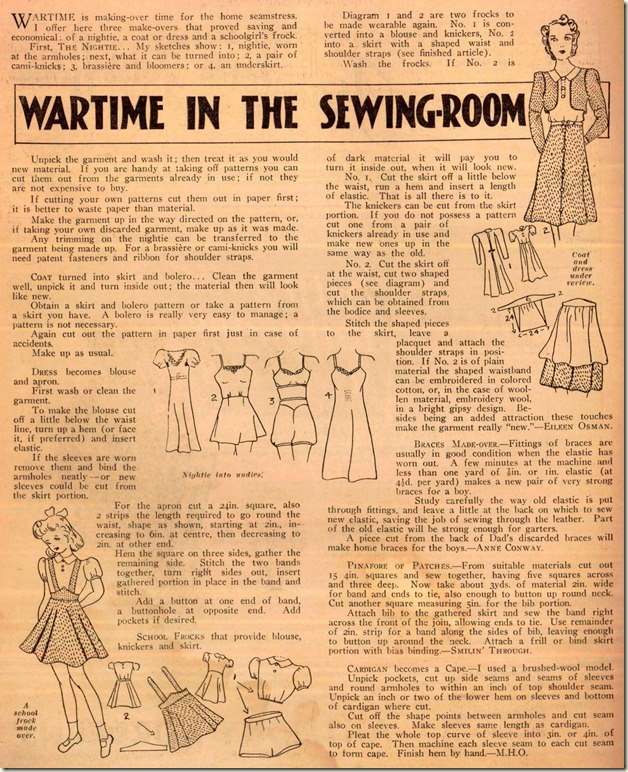 The 2/1st Battalion was a battalion of the Australian Army formed in Sydney in October 1939 , and served in Greece and the Middle East.  On 10 March the Battalion left for Australia to assist in the defence of Australia from Japanese advances, but they were diverted to Ceylon on the way. They finally arrived in Melbourne in August 1942.

Also on this day, USAAC P-40E Kittyhawk #41-5526 crashed into a mountain near Aberfeldy in Victoria in bad weather, during a return flight from Canberra to Laverton.  The wreckage was not found until New Year's Eve 1948 by a man walking his dog.  Captain Joseph Potter McLaughlin was killed in this tragic accident.   His watch was recovered from the wreckage by a  local in the 1950's. It had stopped at approximately 10.30am.  Another local recovered McLaughlin's engraved revolver.

Have a safe weekend