During April 1942, there was evidence that the Japanese were planning to invade Port Moresby, and perhaps Australia.  I wrote on 2 April about the US Air Craft Carrier Hornet, that had left San Francisco and set course for Japan, with Colonel Doolittle in command.   On 18 April 1942 Doolittle launched the first air raid on the Japanese homeland, bombing Tokyo, Yokohama, Kobe and Kyoto, using the sixteen B-25 Mitchell bombers launched from the decks of the Hornet.

As a result of Doolittle's air raid, the Japanese changed their priorities and downgraded the Combined Fleet support for the Port Moresby Invasion to just a Task Force support (the two aircraft carriers, Zaikaku and Shokaku, and the light carrier Shoho) to concentrate their effort on Midway (an important naval refuelling port on an atoll in the middle of the North Pacific Ocean) and protecting Japan itself.  At the same time the 300 aircraft air-raid on Townsville was (thankfully, they could have even hit Mackay!) removed from their plans.  It did, of course, do great things for the moral of the Allied troops and those at home.

Here is a short movie and interview with then General Doolittle from1980. 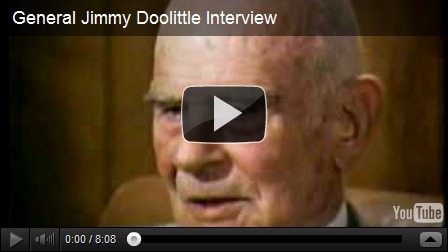 A true gentleman and a hero.

On a lighter note, the Melbourne Argus on 18 April reported on a “WIFE'S RIGHT TO PICK HUSBAND'S POCKETS.”  In Chicago Judge Rudolph Desort had  told a bachelor attorney during a divorce case hearing the day before that a wife had an inalienable right to explore her husband's trouser pockets.  The lawyer, who was representing Stephen Lykty, charged Mrs Lykty with stealing incriminating letters from her husband's pockets. "It is not lawful," he said.  The judge retorted, “Isn't it?You get married and you'll find out. Wives always have and always will pick their husbands' pockets."

Got to love the law!