Part 4 of the summer frocks, with a pretty two piece dress that looks like a suit. 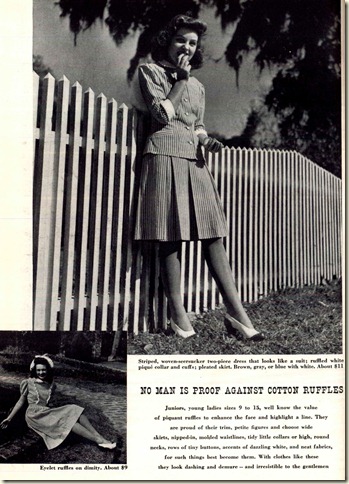 On this day in 1942 the wireless station at Darwin, NT, received  signal a which read; ‘Force intact. Still fighting. Badly need boots, money, quinine, tommy-gun ammunition’.  This was the first message from occupied Timor, indicating that the lost commando force, (Sparrow Force), was still fighting.   A reply to the commandos’ signal was transmitted on the next night .
Meanwhile, in Europe, a bombing raid on the German city of Augsburg was underway, an unusual daytime attack.    Both the British RAF and  the USAAF were deployed.  RAF Bomber Command targeted the Augsburg MAN U-boat diesel engine factory to test the new Avro Lancaster, with a bomber force of twelve aircraft.
The US air force sent thirty Douglas Boston medium bombers and a large Fighter Command to targets in Northern France intending to draw off German fighters, and one Boston was lost during this diversion .
In the course of the raid, seven of the 12 Lancaster's had been shot down with the loss of 49 crewmen (37 died and 12 were taken as prisoners of war) .  Only two of the first formation of Lancaster's dropped their load on the factory.  Five of the next dropped their bombs.  Squadron Leader John Dering Nettleton returned in a badly damaged aircraft and was awarded the Victoria Cross for his leadership of the raid.
Post-war analysis indicated damage was minor; five of the bombs dropped had failed to explode. Eight machine tools were destroyed out of a total of 2,700, and five cranes out of 558.  Perhaps another indication of how pointless war is .
Deb xx