“Girls on duty”. on the roof in besieged Leningrad. Air defense by Boris Kudoyarov 1 May 1942

On 1 May 1942 six airacobras crash landed on Ape York Peninsula, Queensland. You can read about it here.

Meanwhile in Sydney the RAN cruisers Hobart and Australia depart to join the USN task force in the Coral Sea, and USN Task Force 17 with carrier Yorktown joins Task Force 11 with carrier Lexington. The battle of the coral sea would begin in a few days time.

Also on this day Gauleiter Arthur Greiser, head of the district known as the Warthegau in the former Polish territories annexed to Germany after 1939, wrote a letter to Reichsführer SS Heinrich Himmler. Basically it spoke of murdering 100,000 polish jews over a three month period, as they were infected with tuberculosis. You can read the letter here.

I think I have found my horse! 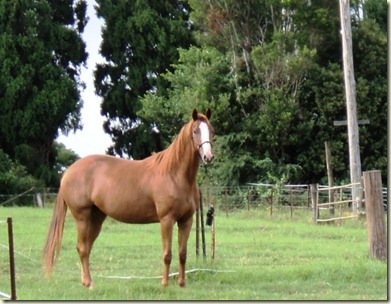 She arrives Sunday.  And no, I haven’t trialled her.  She is about 1000km form where I live.  My riding instructor asked me if I’d buy a car without driving it first.  Well, no I wouldn't.  But my husband has – three times.  Only one was a lemon, so I think  I am allowed a possible mistake.  Not that I will make one. I hope.  But I’ll let you know.