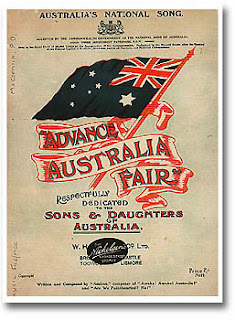 The Brisbane Courier mail reported on 15 May 1942 that the search for the identity of the writer and composer of "Advance Australia Fair", Australia’s official National Anthem since 1984, was at last answered:

“ by the claim of Mrs. M. G. Mercer of Station House, Chidlow, that the words were written by her father, William Maxwell McEwen, son of Sgt.-Major McEwen, who was in charge of Fort Denison in Sydney Harbour. He wrote them, she said, at the request of a Mr. Hermes, who composed the music. Mrs. Mercer's father, who died in Perth four years ago, aged 78, was born in Sydney, and was a teacher of art on the staff of Perth Technical College for 25 years. "If the lady in New South Wales, whose claim now is being investigated, is a daughter of Mr. Hermes, or more likely a granddaughter, it will prove the correctness of my statements,"' declared Mrs. Mercer.”
It is now recognized that Advance Australia Fair was created by the Scottish-born composer, Peter Dodds McCormick, under the pen-name 'Amicus' (which means 'friend' in Latin), and first performed in 1878.  The earliest known sound recording of Advance Australia Fair appears in "The Landing of the Australian Troops in Egypt", circa 1916, a short commercial recording dramatizing arrival of the Australian troops in Egypt on the way to Gallipoli.

Earlier in May, according to the Townsville Bulletin of  4 May 1942, six people had claimed kinship with Peter Dodd McCormick, to obtain a share in recently accrued royal ties from 'Advance Australia Fair.'
“If their Claims are proved they get equal shares of the money. Mr. Matthews, of Paling and Co. who bought the rights of the song from McCormick in 1914,  outlined the strange story of what is now accepted popularly, if not officially, as our National Anthem.  He said royalties from the song were no more than a few pounds a year until recently, so the question or distribution of profits did not arise.  When broadcasting companies took up the song and its national character began to be generally recognized, a substantial sum accrued.  Although Paling's copyright does not expire until 1966, there has always been a tradition that where contracts were made before the days of broad casting, worthwhile companies voluntarily give heirs of composers a share in profits. 'We have been printing the song since 1880.' Mr. Matthews said, 'several copies are about, autographed by Mr. McCormick, as the composer. It would be impossible to estimate the amount of royalties.' Two nieces of the composer to … Mr McCormick, who live in Sydney, recalled today the pleasure that their uncle had derived from composing it and hearing it sung for the first time by 1000 voices at the Exhibition Build ins; in the Palace Gardens, Sydney, in 1880.  Later it was sung by a choir of 10,000 voices at the inauguration of the Commonwealth in Centennial Park Sydney, on January 1, 1901.  It was played by massed bands and sung as the Australian National Anthem at the naming of Canberra on March 12, 1913.  The first edition of 'Advance Australia Fair.' having been written some years before Federation, contained no references to the Commonwealth, but the third verse in the second edition was altered In I900 to include the Commonwealth, and the fourth verse in the third edition was altered at the suggestion of Professor Stuart Blackle, of Edinburgh. Mr. McCormick, who was in the Education Department and was once a teacher at Fort Street School and at the Palmer Street School, Sydney, died In 1918.   Mrs. A. E. Morroe, of Summer Hill, said she was a niece of Mr. McCormick, and as a young girl used to play 'Advance Australia Fair' over for him when he was composing.  She was sure Mr. McCormick would be the happiest man in the world today if he could know how it had come to the fore.  Mrs. Douglas Stewart, of Elizabeth Bay, said that she also was n, niece of the composer. She had lived for many years with Mr. and Mrs. McCormick at Darlinghurst, and Iater at Waverley.  They had no family of their own and had adopted her as their daughter. “One of the last things Mr. McCormick said to me before his death,' said Mrs. Stewart, 'was 'Well, I hope the old song will live,' and it certainly has lived.' Mr. McCormick composed both the words and music of the song, and it was adopted by one of the Governments some years ago as the National Anthem for Australia. The Government paid him £100 to have the right to use the song at Government functions. He held the copyright, but sold it to Palings two or three years before he died.”
You can read more about the song and  the changes made over the years here,  and see the 1942 sheet music here.
Olivia Newton John singing Advance Australia Fair at the Melbourne Cup Carnival in 2009: