The cover of Good Housekeeping magazine for January 1913:

Postum, the instant coffee alternative that made marriage possible. Personally, we need coffee in our marriage!  In 1913 there were not many coffee drinkers in Australia, but even instant coffee was available.  It was actually invented by a gentleman from New Zealand, Mr David Strang,  in 1890, who patented his ‘dry, hot-air process’ and sold his product under the trading name Strang's Coffee.

A  Japanese scientist later introduced his version of the powdered substance at the Pan-American Exposition in New York in 1901, and American-Belgian inventor George Constant Louis Washington also  perfected a method of  mass producing instant coffee , founding the  G. Washington Coffee Company in 1910.  It was actually marketed as the coffee that didn't cause you indigestion.

The Nescafé brand later introduced a more advanced coffee refining process in the 1930s.  For real coffee you may have used this coffee maker in 1913. 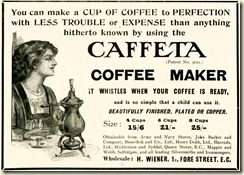 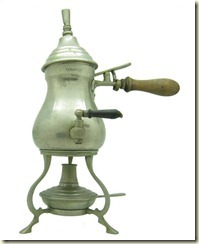 source
The Caffeta used a spirit burner to heat the coffee, came in 3 sizes - 4, 6 & 8 cups – and were made of silver plated nickel or copper . I would love a copper one!

“Either for boiled or drip coffee, I allow a full tablespoon of finely-ground coffee to a cup of boiling water. If for breakfast coffee, the cup is the breakfast size; if for after dinner coffee, the size of the spoon is the same, but the cup is the small, or “demitasse” size.
When I make boiled coffee, I stir in the shell and white of an egg, with a little water with the ground coffee, pour on my measured boiling water, bring it to a boll, and cook for ten or fifteen minutes, boiling steadily, but not permitting it to boil over. Then I throw in a little cold water to check the boil suddenly, stand the coffee pot to one side so that it will settle, and pour the coffee off carefully so as not to stir up the grounds.
When I make drip coffee, I pour the boiling water slowly upon the ground coffee in the percolator, and after it is dripped through, turn the water into a heated vessel, and then let it again drip through the coffee grounds. The oftener the dripping process is repeated, the stronger the coffee. Never let it boil in a drip pot of any sort.
I always make the coffee with freshly-boiled water and do not let the coffee stand after it is made.”

I wonder if the painting below is of an instant coffee factory, or more a bean sorting room.


For more coffee and vintage photos, go to tumblr!