Despite having learnt at school that Marconi invented the radio, and wireless technology, I now know that is not correct.  Marconi was just the guy who managed to get someone to listen to his ideas, and give him financial backing.  Not to say he wasn't a genius, but there were a whole host of people who contributed to wireless technology, as I mentioned in my last post, not in the least Nikolas Tesla. But there are other contenders.

In 1997, The Institute of Electrical and Electronics Engineers (IEEE) , in New York, named Jagadish Chandra Bose (30 November 1858 – 23 November 1937), Professor of Physics at Presidents College in Bengal, one of ‘the fathers of radio science’.  He had transmitted and received a radio signal 2 years before Marconi, and some believe that  connections of Marconi's wealthy family stole Bose's design.  Bose was the first to use a semiconductor junction to detect radio waves, and he invented various now commonplace microwave components, as well as studying microwave activity in plants. Bose was not interested in patenting his inventions, and made his processes public at a presentation in 1899 at the Royal Institution, London.


Anyway, radio was invented. But it took someone else to work out how to transmit voices and music through radio waves.  That someone was, most agree, was Reginald Aubrey Fessenden (October 6, 1866 – July 22, 1932), a Canadian inventor and former employee of Thomas Edison.   Fessenden began  experimenting with wireless technology in the 1890s, after reading about Marconi and Lodge, and thought that  he could develop a far more efficient system.  In 1900 he went to work for the US Weather Bureau, wanting to develop coastal radio stations to transmit weather information to ships. He made great advances, and in December 1900 while experimenting with a high-frequency spark transmitter, successfully transmitted speech on over a distance of about 1.6 km (1 mile), although the sound quality was very distorted.
After a disagreement with the Weather Bureau, Fessenden left in 1902.  He soon found some financial backers, and decided to try to establish a transatlantic radiotelegraph service.  In January 1906, using his rotary-spark transmitters, Fessenden made the first successful two-way transatlantic transmission, exchanging Morse code messages between a station constructed at Brant Rock and one built in Scotland (Marconi had only achieved one-way transmissions at this time.)  Work was suspended due to weather, and then the  radio tower n Scotland collapsed, ending the service before it began. 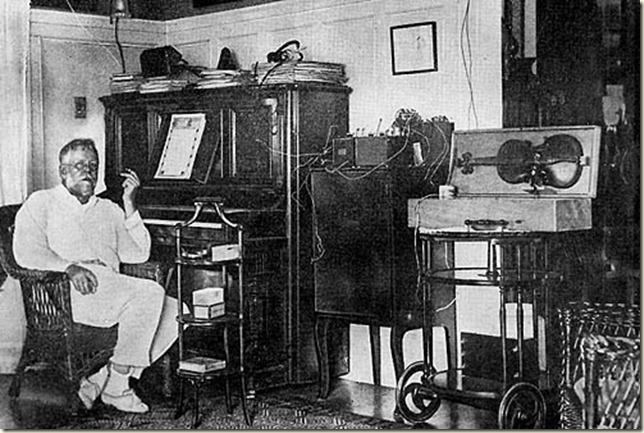 On Christmas Eve 1906, Fessenden sent out a short program from Brant Rock.  He used a transmitter consisting of a special high-frequency alternator, designed by Swedish engineer, Ernst Alexanderson, to generate continuous, unvarying frequency of 100,000 hertz ,for continuous wave radio.  Fessenden used a microphone to vary the radio waves to correspond with the sound waves from his voice and other music.  His programme included a phonograph record of Handel’s Largo, followed by Fessenden himself playing Holy Night on the violin and then reading a passage from the Bible.  The broadcast was heard several hundred miles away, however there was some accompanying static, due to irregularities in the spark gap transmitter he used.

Fessenden broadcast a second short program on New Years eve, which he claimed was heard as far as the Caribbean.  Although now seen as a landmark, these two broadcasts were barely noticed at the time, although the New York Times did run an article about the events almost a year later.
Fessenden's broadcast foreshadowed of the future of radio, although his technical achievements at that time were not matched by financial success.  Fessenden was dismissed by his backer, NESCO, but  Alexanderson, who had designed the alternator for Fessenden, continued to work on alternator-transmitter development at General Electric, mostly for long range radiotelegraph use.  By 1916  the high-powered Alexanderson alternator was capable of transmitting across the Atlantic.

NESCO, who went into receivership for five years in 1912, the same year as vacuum-tube transmitters were invented.   While vacuum tubes and fancier electronics are newer developments in radio, the physical principles are the same, and the AM radio we use today is essentially what Fessenden invented in 1906. The modern cell phone also owes much to Fessenden -- the difference between it and his wireless technology is that the continuous waves are now altered using frequency instead of amplitude modulation.
For the ordinary public, the first widely used type of radio receiver, were Crystal sets. The rectifying property of crystals was discovered in 1874 by Karl Ferdinand Braun, and crystal detectors were developed and applied to radio receivers in 1904 by Bose,  G. W. Pickard, Dunwoody and others. Basically they found that crystals of certain materials, including silicon, lead sulphite, and silicon carbide, could ‘detect’ radio waves, allowing current to pass in only one direction, the weak signal had to be heard in headphones.  A thin wire connected the crystal to the electrical circuit, known as ‘cats whiskers’, which gave the crystal sets their other nickname.

Crystal radios are the simplest type of radio receiver  and can be handmade with a few inexpensive parts, like an antenna wire, tuning coil of copper wire and a crystal detector .  They were sold and homemade by the millions, leading to the development of radio as an entertainment medium in the 1920s, when the BBC in London began broadcasting news, weather and musical programmes in 1922, and Australian radio stations began in 1923.  Radio was advertised as a community and family activity.
Soon of course, the vacuum tubes were used in radios for the public, and the popularity of crystal radios diminished.  Radio listening was still a community and family affair however.  A community radio listening facility was built in Sydney, for those unable to afford their own radio, and ads still used the family to sell radios.


I was hoping to build a crystal radio set with my son this year, but due to the phase out of analogue radio  across Australia, crystal sets will become obsolete (the kits unable to buy already).  My old Radiola now plays only one station too. It’s a shame that this low cost, easy to make yourself technology will be unavailable to the next generation.  Maybe we’ll build a robot instead.