Here in Australia we officially have one more month of Summer, so today some summer fashions of 1913. Following on from yesterdays paintings, first some art. I love this simple look - an unlike me today, she wouldn't get sunburnt. Mind you, I don't how how practical it would be for mowing the lawn!

The light coloured fabric is also seen here in a shot from Downton abbey. Sybil's dress on the left is an original from the period.

Here are some summer suits for 1913, from New York. You can download the complete e-catalogue here. 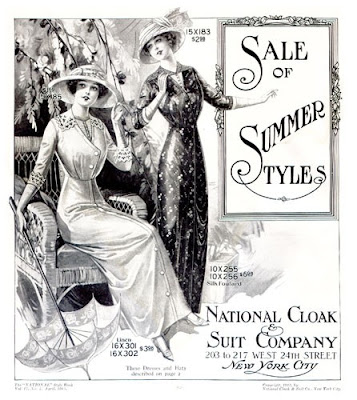 These lovely pink dresses, with matching parasols, are for the American summer of 1913.

And another pink day dress from England, at the Victoria and Albert Museum, London.
And dresses for visiting, or the seaside

The sheer dress in the middle may be something like this one of sheer lawn.

During the early years of the 1910s the fashionable silhouette became much more lithe, fluid and soft than in the 1900s. When the Ballets Russes performed Scheherazade, based on the Arabian Nights, in Paris in 1910, a craze for all things oriental began. The couturier and artist Paul Poiret was one of the first designers to translate this vogue into the fashion world, with flowing genie like pantaloons, turbans, and vivid colors and geisha style kimonos. Styles became looser and more fluid, and many caused quite a stir..

Lovely Lady Sybil shocked all in Downton Abbey with her avant-garde harem pants, based perhaps on Poiret's harem pant collection of 1911.

Looks quite comfortable, don't you think?  I would probably have worn somehting like these, though -
Summer costumes for the Middle-aged Woman, from the April 1913 Good Housekeeping magazine.

They are very elegant, aren't they?  Can you imagine wearing clothes like these everyday?