Superheros (and fashion) in the 1930s


Yesterday at my children's primary school was Superhero Day - a day for the kids, and teachers, to dress up and raise money for charity - in this case the Royal Flying Doctor's Service.   The kids put together their own costumes, and this is what they came up with: 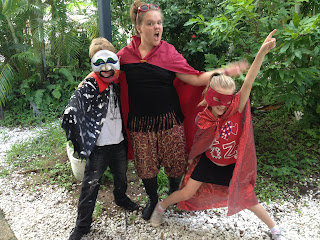 According to Wikipedia  a superhero is a (fictional) character "of unprecedented physical prowess dedicated to acts of derring-do in the public interest."  My three superheros were apparently  "Nightmare Scaring away boy', "Super Buccaneer Boo" and 'Rosie Oz Girl,"  more costumed crime-fighters than true super heroes.  They used to love to dress up as superheros like superman when they smaller, and I guess all children like to think they are bigger, stronger and tougher than they are, and able to fight baddies.

Many of the superheroes we know today were created in the 1930's. Maybe the era of the great depression needed this form of escapism more than ever before, and comics , especially were  a cheap, easy to read, form of entertainment.  Superman began life in a comic book in June 1938, and Batman the following year, but there were other superheroes in the 1930's, some like The Lone Ranger and the Green Hornet who began on radio, in 1933 and 1936 respectively.

Mandrake the Magician (1934) and The Phantom (1936) began as cartoons in newspaper, as did a superhero I haven't heard of, The Phantom Magician (1935), named to make things confusing perhaps. Nonetheless, Mandrake and the Phantom Magician in Mel Graff's 'The Adventures of Patsy' are regarded by comics historians as the first superheroes of comics.  Here's an example of 'Patsy', although the superheros don't feature.

"Mandrake the Magician" was created by Lee Falk in 1934.  Falk's career began in advertising before a  move to radio. His interest in magic led him to create a character who would solve crimes and mysteries through the use of reason and magic.  The dapper, moustached magician remains one of the most famous characters in the comic strip medium, his adventures appearing in newspapers worldwide. Mandrake uses his legendary powers of hypnotism and illusion to combat crime, fighting a variety of villains including gangsters, mad scientists, extraterrestrials, and characters from other dimensions.  The series was turned into a 12 chapter movie in 1939. (My son wants a top hat so he can be Mandrake next dress up day!).

Falk apparently came up with the name Mandrake after the poisonous plant of the same name.  Phil Davis, the eventual artist of the cartoon strip, changed the look of his character somewhat to match that of Leon Mandrake, (1911 - 1993), a magician in England from the age of eleven who started touring North America at age sixteen.  First billed as “Leon,” and later as “Leon the Ventriloquist,” by the mid-1940's he was being billed as “Mandrake the Magician.”

The Phantom was also created by Falk, and stars a costumed crime fighter operating from the fictional African country Bangalla.  The people believe him to be immortal, but The Phantom is the 21st in a line that began in 1536, when his ancestor Christopher Walker vowed to avenge his father's death and fight evil, starting the legacy of the Phantom that would be passed from father to son.  Totally human, the  Phantom has to rely on his strength, intelligence, and immortal reputation to defeat his enemies.

In Australia, The Australian Woman’s Mirror magazine began publishing the Phantom in September 1936, nearly seven months after the series made its US debut in the Hearst-owned New York Journal-American newspaper.

Of course the Phantom was made into a movie in 1996 with Billy Zane, and Kristy Swanson as his wife, Diana Palmer, and while not brilliant, it does have some great costumes.

There have been other recent superhero remakes, which is a  great way to see some lovely 30's inspired outfits while keeping your family happy - especially the boys (mine get sick of watching original 1930's movies).  Margo Lane (Penelope Ann Miller) has some stunning outfits in the 1994 version of 'The Shadow,' where Alec Baldwin is in the lead role.

Dick Tracy, first created as a newspaper comic in 1931, was made into a movie in 1990 starring Warren Beatty and Madonna.  Done in a real comic book style, the outfits, cars  and sets are amazing.

Other 1930s superhero and action figure creations include:


So many possible movies, and costumes. I can't wait to see the new Lone Ranger movie when it comes out.   I saw the 1980 movie version of Flash Gordon at the movies for my 10th birthday. I recently re-watched it with the kids - that is one movie really ready for a remake, although the costumes are pretty fabulous. And Timothy Dalton is, well, in it.

Whose your favourite superhero?  For a full list of who and when, go here.