Today's dress choice is inspired by the gold lame dress worn by Claudette Colbert in this week's movie, Midnight.

Lamé is a fabric which incorporates metallic threads was often used in evening wear of the 1920s, '30s and '40s, and it photographed well in black and white, giving a liquid metal look.  I haven't been able to find a true colour image of the dress Ms Colbert wore, for some reason the dress on the DVD cover had been colourized in pink, but I have found a similar dress from the era.

This one was designed by American designer Jessie Franklin Turner  (1881–c. 1956) in about 1933, who was well known for her evening wear.  She used lame in many other dresses, as well as in her lingerie designs. This dress is bias cut and has interesting sleeves, which add to the dramatic draping effect.

Lame is popular again, or still, today. Meryl Streep wore a gold lame dress designed by Lanvin to the Oscars in 2012.

Jennifer Lawrence wore a Gold Prabal Gurung Gown For The Hunger Games Premiere, also last year, although it had a little less fabric. 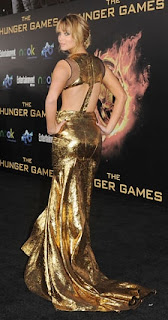 Similar perhaps to Joan Crawfords revealing ensemble in The Women, from 1939, designed by Adrian. A bare midriff in evening wear was unprecedented and caused quite a sensation.

This dress from 1933, designed by Walter Plunkett for the movie Christopher Strong, is very sci-fi. Katherine Hepburn, in her second screen role, looks stunning.

Of course the most famous gold lame dress was probably that worn by Marilyn Monroe, briefly, but memorably, in Gentlemen Prefer Blondes in 1953.  The pleated halter neck dress was designed by William Travilla. 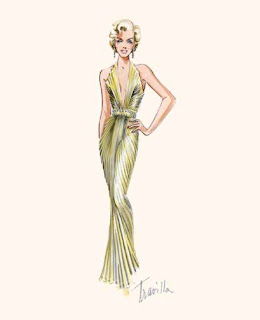 Ginger Rogers had previously worn the same dress in the movie Dreamboat in 1952.  Marilyn, with whom Ginger had become friendly while filming Monkey Business, happened to stop by the set of Dreamboat one day and saw the dress. She liked it and asked to wear it in Blondes, which is exactly what happened.

Another memorable gold lame dress is Grace Kelly's masquerade ball gown in To Catch a Thief (1954), designed by Edith Head.


She looks a bit like an Oscar, don't you think?!

Do you love Lamé ?

As usual, more images on tumblr.