A brief history of Feedsack fabric


By 1900 the cotton industry in America was booming (thanks to all those slaves) and the bulky,expensive wooden barrels that used to hold dry goods like grain, sugar, salt and seed were replaced with fabric bags or “feedsacks.” At first, these sacks were sewn out of unprinted, unbleached muslin (as they are now), and really not much to look at, but as the depression took hold, many hard-up housewives started using the fabric from the sacks to sew everything from girls' dresses to boys' shirts and even underpants, as well as aprons and other necessities.

In America marketers and advertisers took note of this trend, and in the 1930’s began making feedsacks out of attractive, colourful calico to get women to buy their bags. The bag labels were either printed on in ink that washed out, or were made of paper and stuck on so they could be easily removed. One unfolded bag equalled 1 yard (almost 1m) of fabric, and getting a pretty print – and enough of it to make an adult sized dress – became a cut throat  competition. I can imagine that lots of bulk buying went on to ensure women got enough of the fabric they wanted!   Smaller pieces and off-cuts were also used to make colourful quilts.

Of course after the depression came the war and its associated fabric shortages, and printed feedsacks continued   The recycling of bags became a necessity, encouraged by the government -"A Yard Saved Is a Yard Gained for Victory." Women often sold their surplus bags to others as a way of picking up cash to aid in running the home.  Once a dress or other garment was worn out, parts could still be salvaged and turned into smaller items or used for quilting.

After the war, the bags were not only a sign of domestic thrift; they also gave rural women a sense of fashion. National sewing contests were organized as a way for women to show off their skills, and manufacturers to show off their designs, and women would meet for sack-and-snack-club fabric swaps. 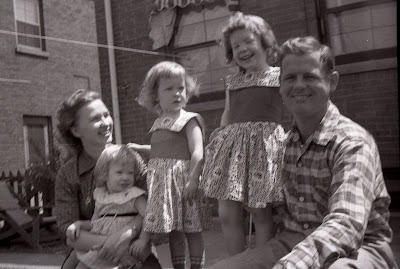 Feedsack fabric continued into the 1950s and 60s.  Many of the dress pattern companies took advantage of the feedsack fabric, designing patterns where the pattern pieces would fit the dimensions of the bags. Most dresses designed for feedsacks had waist seams. 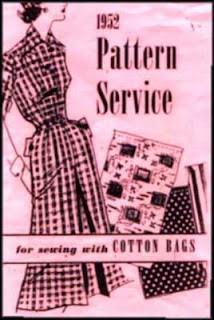 Reproduction feedsack fabric is available today. The thread count is too high to really capture the basic feel of the real deal, but the patterns are glorious. The best indicator of real feedsack fabric is a line of holes from the chain stitching that once held the sack together - and not always in a straight line. You can find original feedsack fabric on Etsy and Ebay, but usually only in small quantities - perfect for quilting.  A blouse would be nice though, maybe with a different fabric for each part.  Very 'make do and mend'!

I wish my flour and chicken feed came in colourful fabric sacks -I don't think I'd ever buy fabric again!

What would you make with feedsack?