I have just finished reading 'Come in Spinner', a giant of a novel written in 1951 about the experiences of a group of Australian women on the homefront during WWII. I haven't been able to get a copy of the mini-series  (it was a huge book), so instead I have been watching a few 'homefront' movies. The first one was the classic and well known 'Mrs Minniver' (1942), and then the less known 'Since You Went Away'(1944), which stars one of my favourite actresses, Claudette Colbert. A brief look at that one today. 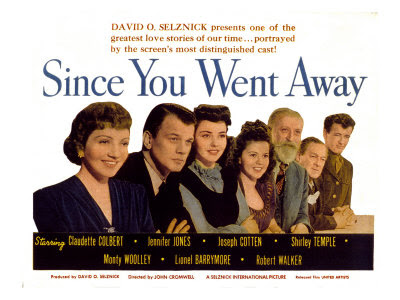 
This epic movie (almost 3 hours, and with an intermission) was directed by John Cromwell and produced by David O. Selznick (Gone with the wind), and based on the 1943 novel Since You Went Away: Letters to a Soldier from His Wife by Margaret Buell Wilder, which was in turn based on her newspaper column "Letters to a Soldier from His Wife" for the Dayton (OH) Journal Herald. Like the heroine of "Since You Went Away", Wilder was raising two teenage daughters and taking in boarders to make ends meet while her husband, Donald, was serving in Europe during World War II.


The story begins in small town America in January 1943, with the empty chair of of Mr Hilton, who has (finally) joined the war effort and left for training. His wife, Ann, is bereft, and her loneliness begins the moment he is gone, but she tries to be cheerful for her two teenage daughters, Jane and Brig. Without her husbands wage as an ad executive coming in, things are tight, and Ann has to sell the car, dismiss the maid and take in a lodger.  Fidelia the maid soon returns, and works for room and board in between her war work. The first applicant, a young marine, sees daughter Jane and immediately accepts the unseen room, but Ann tells him it's taken. Instead crusty retired Colonel Smollet moves in. He gets some lesson from courtesy from Brig, and turns out to be a nice guy after all.


Smollet's almost pacifist grandson Bill soon appears and becomes Jane's love interest - once her crush on friend of the family, officer Tony, has run it's course. Jennifer Jones (Jane) and Robert Walker (Bill) were going through a horrible divorce when the movie was filmed, but on camera they have wonderful chemistry and play the parts of young love brilliantly.


It is a very sentimental, at times corny, movie, but there are some wonderful insights into the realities of life on the home front in America.  Perhaps they didn't have to worry about bombs dropping on them, but there was still the pain of separation, the loneliness and worry, the shortages and rationing, and the death of loved ones far from home.   The family and it's relationships are the main focus of the film, but there are some great scenes  that show how the war affects others. There is a scene on a train, in which Ann and her daughters are trying to get to town to see her husband before he leaves for the South Pacific, which shows wounded and limbless soldiers, a young woman with a baby who has never seen it's father, a young girl refugee, and an old lady whose nurse grand-daughter is missing in action. And then of course they just miss seeing him because their train had to wait for a supply train to go through.
When Jane graduates high school she gets a summer job with the red-cross, and her work in the hospital prepares her for the possibility of Bill coming home injured.


Brig meanwhile is helping the war effort by starting a salvage centre for paper and metal. 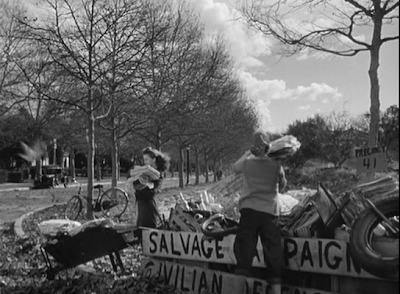 Unfortunately Bill doesn't  return home, and Ann has to break it to Jane - her own husband is already missing in action. She also has to tell his grandfather, the colonel, who feels guilty as he pressured Bill into being a soldier. "My grandson had to die for me to be proud of him." 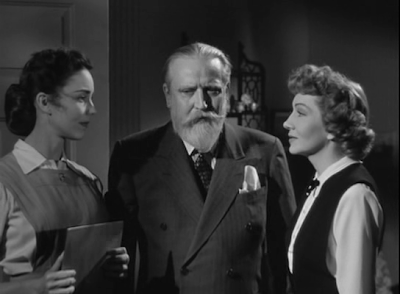 Jane continues her work at the hospital, and assists psychiatrist Dr. Golden, who explains - "there's a whole wide broken world to mend". His is only a small role, but it shows that soldier
s psychiatric wounds were beginning to be taken seriously. Golden tells her to do her best to help the men rebuild their confidence in them selves. 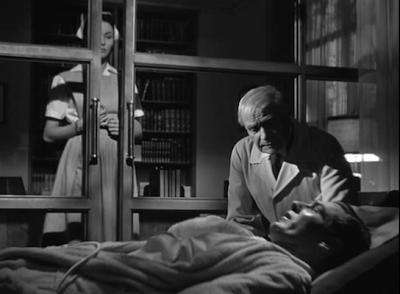 'Agnes Moorhead plays Ann's friend Emily, who is slightly self-absorbed and pretentious, and shows us the evil and unpatriotic things that everyday people may be guilty of. When Emily tells Jane that she shouldn't be touching common young men at the hospital, Jane sets her straight, and Ann then feels so guilty for helping more with the war effort that she gets a job as a welder in a ship yard. "If Claudette Colbert can do it, you can too" seems to be the message. 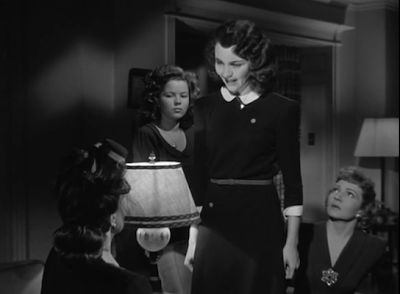 Ann meets refugee Zofia at the shipyard, and they become friends. Zofia recants the inscription on the Statue of Liberty - "give me your tired, your poor, your huddled masses yearning to breathe free" - and tell's Ann that she is what she thought America would be. Ann is floored by the compliment. 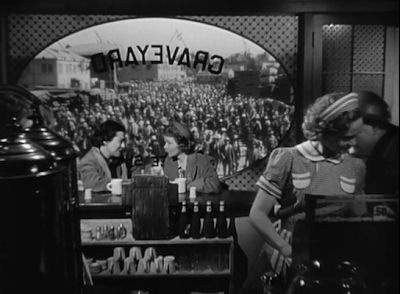 It's Christmas time, and after a cheerful game of charades, Fidelia puts presents, those she has been safe keeping for Mr Hilton, under the tree. Ann opens hers and bursts into tears. 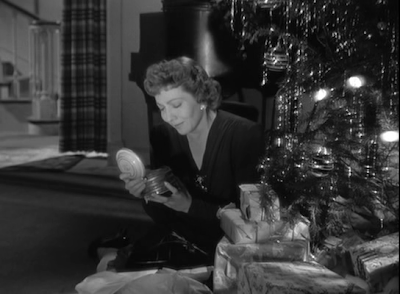 But then, with perfect timing, the phone rings, and the message comes that Ann's husband is alive and coming home. She rushes upstairs to tell her daughters the good news, and the movie ends a happy note - one to give hope to wives and mothers everywhere. It is indeed a tear jerker! 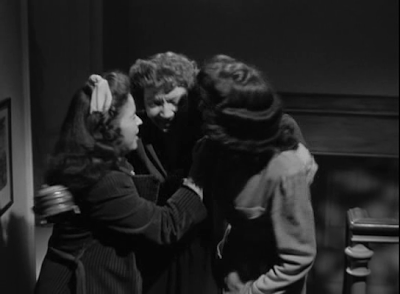 Like Mrs Minniver, this movie was great propaganda for the war effort. Soon after some of the stars helped to promote war bonds as well.


The music score was by Max Steiner, and won the Academy Award for Best Music, Scoring of a Dramatic or Comedy Picture. You just know that when you hear the dramatic music as Bill goes off on duty that it's not going to end well, but there are some musical snippets here and there of contemporary music.

If you have time, you can watch the entire movie here.