I have come across mention of the The Festival of Britain in old novels, and recently in a 1950 magazine I found this ad.

So what was the Festival of Britain?  Held on the centenary of the 1851 Great Exhibition, or Crystal Palace Exhibition, this national exhibition was organised not only to promote the British contribution to science, technology, industrial design, architecture and the arts, but also to help the people of Britain move on from the aftermath of WWII.  A lot of areas in London, and throughout the country, needed total rebuilding, and a festival such as this was the perfect opportunity to do so, while highlighting the new designs and material of the post war age. 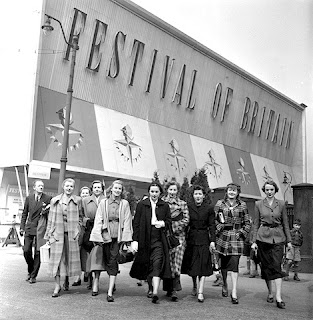 As you can see from the map there were events all over Britain, but the Festival's centerpiece was in London on the South Bank of the Thames.  Here old damaged warehouses and working class housing was replaced with open public space, including a riverside walkway, the Skylon tower, and 'the Dome of Discovery,' as well as new buildings in the International Modernist style.


The Skylon tower was one of the symbols of the Festival of Britain. It was  cigar-shaped, made of steel and clad in aluminium louvres and supported by cables. The base was nearly 15 metres (50 feet) from the ground, with the top nearly 90 metres (300 feet) high and lit internally it was a great feature day and night.  Like much of the South Bank Exhibition it was demolished by the incoming Conservative administration of Winston Churchill  (who obviously did not wanted to be reminded of Clement Attlee's post-war Labour government but suggested that it posed a danger to visitors from lightning-strikes).


Also at South Bank was the Telekinema, a purpose-built film theatre designed by Wells Coates. Documentary and experimental films, including 3D films, and the then new invention of television were shown and it was one of the most popular attractions of the Festival with nearly half a million visitors.

The festival was promoted around the world.

Even here in Australia.  Not only was the first ad (with the map) from the September 1950 issue of Australian House and Garden, but so was this one - 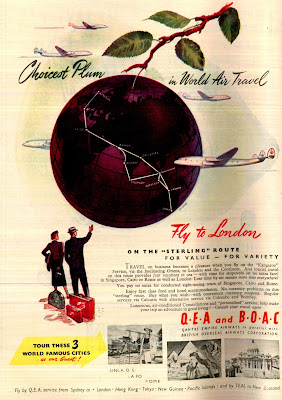 What a trip - Singapore, Cairo and Rome plus London!  It would have been wonderful. Don't you think? 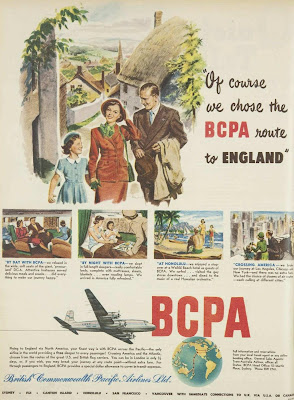 Apparently around 8.5 million people visited the festival - more than Australia's entire population at the time!   2% of those visitors were from overseas - 170,000 people - a pretty good figure for 1951.