I was browsing the Met Museum's online collection the other day, as you do, and came across this stunning dress. 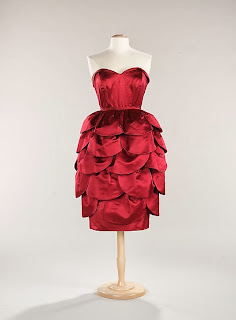 It's a satin cocktail dress designed in about 1955. The strapless dress has been lifted our of the ordinary with tiers of self petals enveloping the hips and finishing just below the knee.The cross-over wrap jacket has 3/4 sleeves (perfect for short gloves ) with a collar that can be worn up  to frame the face - perfect with a modern short haircut or up-do. 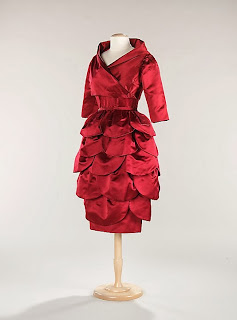 And the designer? Mainbocher - someone I had not heard much of, so of course had to research a little.

Mainbocher  (Main Rousseau Bocher) was born in Chicago in 1890.  He traveled to France when he was about 20, and got a job as an artist with Harper's Bazaar.  In 1922 he became the fashion editor of French Vogue, before opening his own couture salon in 1929.  Mainbocher became "the American" in Paris that any woman who could afford his luxuries, turned to. His clothes were elegant and different - strapless dresses (new in the 30s), cotton gingham evening dresses, and fabrics such as men's shirting, linen toweling, velvet and cotton pique. He also loved feminine details such as gigot sleeves ( or leg-of-mutton sleeves, popular in the 1830s), as seen in this burgundy velvet dress from 1934.

He designed much of Wallis Simpson's wardrobe, naming a color, "Wallis Blue," for her. In 1937, he also designed the wedding dress and trousseau for her marriage to the former Edward VIII (the Duke of Windsor). 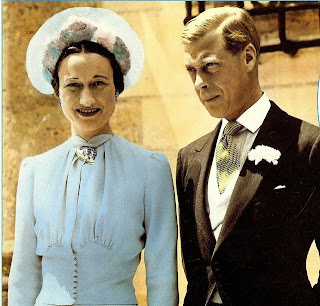 A defect in the stability of the dye has caused the dress to lose its "Wallis" blue, but the styling shines through.

At the beginning of WWII, in 1939, Mainbocher closed his Paris house and returned to New York, opening his first showroom on Madison Avenue, next door to Tiffany's at 57th Street.

His final Paris collections created a storm of controversy, shaped as it was by the "Mainbocher Corset," with a nipped-in waist which radically altered the undefined silhouette of the thirties. The corset was immortalized in 1939 by Horst.
The corset controversy proved to be a significant marketing opportunity, and in the US Mainbocher teamed up with the Warner Brothers Corset Company and streamlined the design for mass production.  He also designed women's uniforms for the American war effort, such as this Red Cross Uniform from about 1940, as well as uniforms for the WAVES (Women Accepted for Volunteer Emergency Service).

In 1947, eight of the New York Dress Institute's Ten Best-Dressed Women in the World were Mainbocher clients, including among them Gloria Vanderbilt, whom he designed for until his retirement in 1971, at age 81.

The Mainbocher label is now set to be revived, after French entrepreneur Arnaud de Lummen acquired the trademark rights and intellectual property to the label in 2012. Why?

"You start with roots and a history. When you relaunch, you already have a story to tell. After a few years, people completely forget that the brand was dormant. People think it's always been there. It's reassuring to consumers that you're not a newcomer."

Ahhh...De Lummen is best known for buying Vionnet in 2006, before selling the brand to Matteo Marzotto and Gianni Castiglioni three years later.

Without Mainboucher himself, what is really the point?

More images of Mainboucher's creations here and here.
Posted by Deb Clark at 08:38