Mid-Century in Mackay - The Ambulance Building

We do have a few mid-century buildings in Mackay.  Just a few.  Here in Queensland we like to tear down and rebuild bigger and better (or the cyclones do it for us), so there are not as many old buildings as there could be.  I thought it would be a good idea to record some, just in case.  A thought brought home to me this morning when I saw that a favorite mid-century house that I pass every day on the way to work has been cement rendered. I mean really - over those lovely, smooth toffee-colored bricks that have stood the test of time for 50 years. What were they thinking?!

Anyway, the other day I had time to take some photos of this mid-century building at the corner of Sydney and Alfred Streets in Mackay. 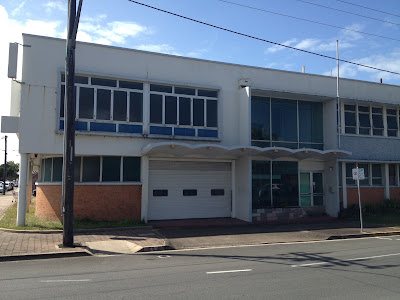 It was originally the building for the Queensland Ambulance Service.  Here it is brand new in about 1960.  You can see it hasn't changed much. I think it still has the original (and now dead) plants in the stone planter box near the front door.


I love the googie style veranda/overhang at the front.  Here are some more current photos. 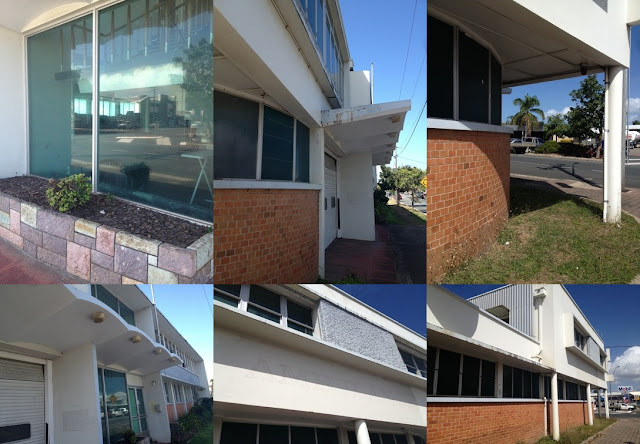 I would really love to get my hands on this building - maybe a combined home and office?!

A new ambulance station was opened in south west Mackay in 2006, and this building has had various tenants. Fortunately, this revamp which was planned for the end of 2010 has not occurred. How boring!

I also love this building, which was the one before the current one. It was 'removed in 1959 according to library records, so maybe it was moved to somewhere else?

The ambulance service in Mackay first began operating in 1903, from the Fire Station, situated diagonally opposite.  In 1909 the Brigade moved from their temporary quarters at the Fire Station to their newly-constructed premises.  Here are the Ambulance staff and families dressed for a fancy-dress function in the late 1920s.

Looks like something out of Agatha Christie's Poirot, don't you think?!

(The last two images shown with permission from the collection of Mackay Regional Council Libraries0.