The other day I did a post featuring, by all reports, the best selling lipstick of 1953 - 'Riding Hood Red'.  The Weekly did a cover with it (here), and a giveaway for sample, and now I've found linked advertising for it in the next issue of the magazine (7 October 1953).

Firstly a repeat of the cover photo, for a Max Factor Ad (double page spread). 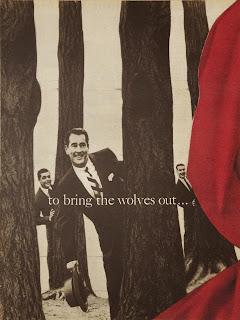 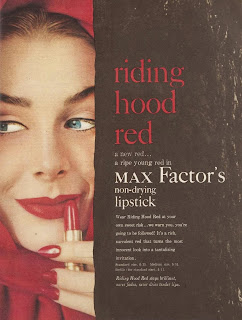 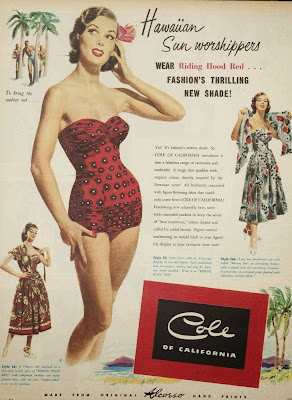 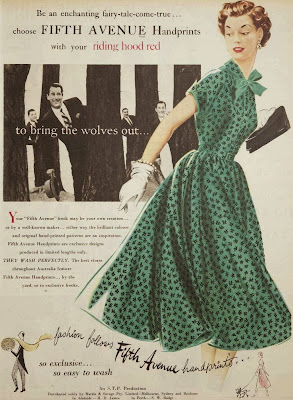 And another article and coupon for the lipstick - "thousands of women" had already applied for the trial size lipstick - who would want to miss out? 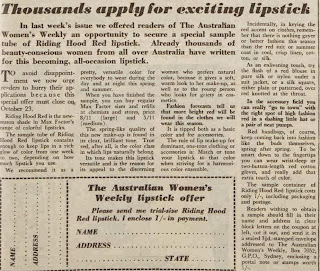 I wonder how much Max Factor forked out for this promotion?! And why?

No doubt they could easily afford it.  Max Factor & Company was founded in 1909 by Max Factor (born Maximilian Abramovich Faktorovich in 1877), a Polish-Jewish cosmetician from Zdunska Wola, Łódź in Poland (Imperial Russia) who immigrated to the US in 1904.  He set up business in Los Angeles, California, seeing an opportunity for make-up and wigs in the growing film industry.

One of ten children, Max was sent out to work at age seven - to sell oranges and candy canes in a theater lobby. He got a job with a pharmacist the following year, and began to study cosmetology. At fourteen, he moved to Moscow and joined the Bolshoi Theater as an assistant makeup artist. The skills acquired in the theater, very helpful factors in the future.

He then had to undergo compulsory military service in the Russian army, but after demobilization in 1895, he opened his own shop in Ryazan, selling his own blush, creams, perfume and wigs - He later moved to St. Petersburg, where he began working at the Opera House, doing costumes and makeup, and soon the name of a talented makeup artist became well known among the nobility. For several years he worked as a cosmetics at the court of the Russian Tsar and the imperial theaters, before emigrating to the US.

By 1914 he had perfected his first cosmetic product- "flexible greasepaint".  To begin with Factor was also the make up artist for the stars,  and his wide range of face powders allowed him to customize and provide more consistent make-up for each individual actor or actress - Platinum (for Jean Harlow), Special Medium (for Joan Crawford), Dark (for Claudette Colbert) and Light Egyptian (for Lena Horne).

He also created some of the best known looks - Clara Bow's heart-shaped lips, Greta Garbo's eyes,  Joan Crawford's exaggerated lips, and it's also believed that he created Harlow's platinum blonde hair. During the 1920s Factors family convince him to widen his audience and sell the cosmetics to the public - he finally agreed, and was able to use his actress clients for advertisements and endorsements.


After Max Factor's death in August 1938, Frank Factor took the name Max Factor, Jr., and expanded the still private cosmetics firm, along with members of the immediate family.  He began development of a smear-proof lipstick in 1939 - one which would also both be non-irritating and not change color. A kissing machine was constructed to test the formula’s resistance to fading. The result was released in the US in 1940 as "Tru-Color" in six shades of red.

During WWII it was near impossible for Max Factor to import overseas, and supplies of cosmetic ran low in Australia.  Girls had to look good for morale, but had to conserve valuable supplies - this ad from 1944 suggests that new Max Factor products would be introduced to Australia soon.

It seems that Max Factor didn't want to lose its share of the Australian market again, and in March 1946, according to the Canberra Times, the company bought a factory in Sydney, to begin production.  Maybe this is the reason for the promotion in 1953 (and similar promotions in 1952 and 1955).  Max Factor's other's great developments include PanStik makeup in 1948 - makeup for the face in a lipstick like tube, Creme Puff in 1951 - combined foundation and powder- Erace concealer in 1954 - specifically for color television, which remains the standard to this day - and waterproof makeup in 1971. 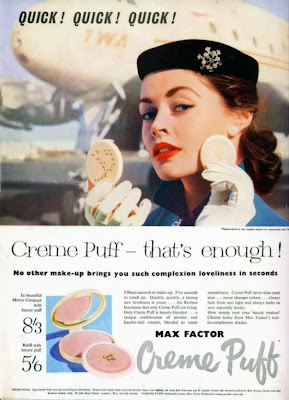