Linda Darnell was only forty one when she died of burns received in a house fire, and by then her Hollywood flame was dwindling.  The gorgeous star reportedly never really wanted to be an actress and was pushed into to it by her mother, although her siblings disagree! It seems Linda was incapable of dealing with the stresses of Hollywood and ended up in a downward spiral of alcoholism, unsuccessful marriages and highly publicized scandalous affairs.  Despite around fifty movies, and being named one of the most 'beautiful people' of the 1940s, she failed to receive recognition from the industry and its critics, and disappeared from the screen in the 1950s. Her choice or not?


Linda was born in Dallas, Texas on October 16, 1923. Her father was for thirty years a clerk in a Dallas post office, and she had three brothers and two sisters. worker and his wife. At age eleven she had her first shop modelling clothes for Dallas stores, often passing for 15 or 16.  By the time she was 13 Linda was appearing with local theater companies and her talent was already becoming apparent.  Her mother encouraged her, determined that her beautiful daughter would be a star.

When the Hollywood moguls sent scouts to the Dallas-Fort Worth area, her mother thought it would be a good idea to give Linda a shot at a try-out.  Despite successful screen tests, she was sent home from Hollywood when they found out her real age.   She returned at sixteen, and landed the role of Marcia Bromley in 'A Hotel for Women' in 1939 - becoming the youngest leading lady in Hollywood history. Her next film was that same year in 'Daytime Wife'. Her third film was as Carolyn Sayres in 'Star Dust' made in 1940 (apparently the movie she had watched on the evening of her death).   She was on the way to stardom, and other quality films followed - 'Blood and Sand' and 'Rise and Shine' among them.

Linda was described as, “the most physically perfect girl in Hollywood”.  Darryl F. Zanuck, the man who 'discovered' her, agreed, and when she refused his advances she lost roles. This allowed her enough time to complete high school however, and then with the start of WWII she began putting all of her efforts into supporting the troops and contributing to the war effort.


She qualified as a nurses aid, and with her friend Ann Miller ran a day-nursery for mothers enaged in war work.  In 1942, when she was 19, she eloped with her first husband and Fox cameraman, 42 year old Sergent J. Peverell Marley.  the studio was not, which sent Zanuck into a rage.  She was on bad terms with Fox studio, who was loaning her out to other studios for bit parts in B-movies, but she also completed Fox movies like 'Buffalo Bill' with Joel McCrae, in 1943.

In 1944 Look Magazine named her one of Hollywood’s most beautiful women, giving her the clout she needed to be cast in better roles.  Soon she became one of the most in-demanded actresses in Hollywood.  In 1945 she played Netta Longdon in the film Hangover Square. The movie proved to be a box-office bonanza.

Linda reached the height of her career when she played opposite Cornell Wilde in 1947's 'Forever Amber' where, ironically, she survives the famed London fire. Two years later in 'A Letter to Three Wives' she again achieved critical acclaim, in part due to the wonderful script written by Joe Mankiewicz, who some think was the great love of Linda's life.  She also co-starred with Hollywood legends such as Tyrone Power, Joseph Cotten and Kirk Douglas, and in total lit up the screens with over 50 films.


In both 'Forever Amber' and the Walls of Jericho', Linda had fair hair.

On location in Jamaica in 1951 she fell ill and had to be quarantined for weeks. Her contract was dropped at this time and she tried to pursue an acting career in Europe. She re-signed with 20th Century Fox. This time with a mind set on television roles.

In 1952 Linda and Marley divorced, and she began drinking heavily. She dated other men, and looked set to marry director Joseph Mankiewicz, but he backed out of leaving his wife at the last minute  - he called Linda a “marvelous girl with very terrifying personal problems.” Due to the breakup she became very depressed and almost killed herself.   Her career slowed down and she found the sudden loss of a steady income hard to deal with  - perhaps why her second marriage to Phillip Liebmann only lasted a year.

This article is from the Australian women's Weekly in 1955. 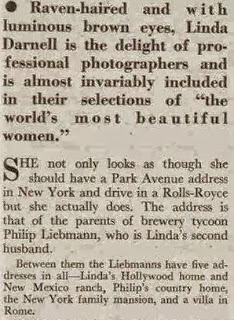 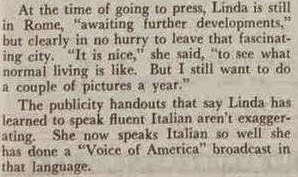 Her third and final marriage was to a pilot named Merle Roy Robertson in 1957.  They divorced in 1962.

Happy Birthday Linda, wherever you are.