The  Ampol Building was designed by Bernard Evans & Associates and completed in 1958 on a site on the corner of Elizabeth and Grattan streets in Carlton..

The circular corner tower housed Melbourne's tallest concrete spiral stair - I love the blue tiles and the neon sign. There was also a petrol station at the ground level.

The building later became a hotel - my parents stayed there in the 1970s I think - Elizabeth Towers. 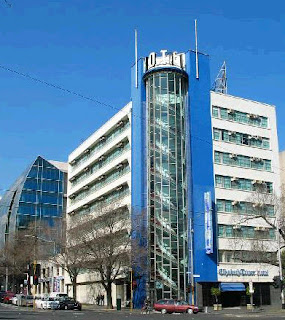 The building was definitely better in it's natural brick state and pre-air-conditioners in the windows. Like many other mid-century buildings it's charm was ruined by paint and 'modernizing'

In 2008 Melbourne University bought the building for $20 million, and demolished it last year to make way for its new $186 million Peter Doherty Institute for Infectious Disease and Immunology.  While I am not saying that it's not a worthy cause, it seems a shame that at least the stair case couldn't be saved.

I for one will miss it next time I am in Melbourne. As a child I loved passing it on the tram on the way into the city - it was the landmark that told me we almost there.

Perhaps though the replacement of the Ampol Building by a University Building is karma - according to this ad from 1967 Ampol donated money to universities.............